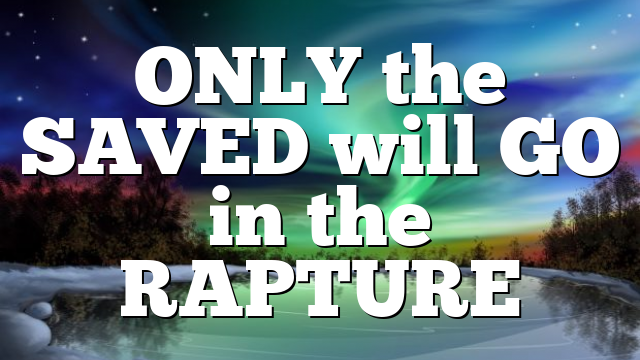 A new Web site is offering a first-of-its-kind service: sending e-mails to nonbelieving friends and family who are “left behind” after you are whisked away by God in the rapture. The site Youvebeenleftbehind.com offers users the ability to store e-mails and documents that will be sent to up to 63 e-mail addresses six days after the rapture has occurred. Users get up to 250 megabytes of storage space, 150 megabytes of it encrypted for sensitive information such as bank account numbers or eTrade passwords that can be accessed by those who remain on earth.

“But you, brethren, are not in darkness, so that this day should overtake you as a thief.”

I believe Paul is saying people will cry for “peace and safety” when the “day,” or “day of the Lord,” comes.

It is a time period that begins with the great tribulation of seven years coming upon Earth, the introduction of the anti-Christ, the battle of Armageddon, and followed by the millennial reign of Christ.

I believe what kick starts that “time of trouble” here on Earth is Jesus removing the church from the Earth in what is known as the “rapture.”

It is when he calls born-again believers up to meet him in the air.

At the Rapture, ONLY the saved are “caught up” to Him.

At the Second Coming, ALL eyes see Him “coming down.”

The last place we find the tribulation saints is in chapter 20, where we find the method of their death — beheading. May I be so bold to point out that though Roman Catholicism has used this method of execution in the past, only Islam is using it in our modern day. Still, there is no mention of who these people were prior to the rapture, whether they rejected Christ or had never heard of him. Those who had the chance to receive the “love of the truth” but chose not to, God judged them and gave them a mind that was closed to the truth. Thus, the rapture becomes just like the point of death to them, and as those who die have no second chance of being able choose Jesus Christ for salvation from the pit of hell, neither do those who reject Christ prior to the rapture have a second shot at salvation during the tribulation period.

SALVATION IN THE TRIBULATION

During the last couple of years, the most frequently asked question I have heard at
prophecy conferences, relates to salvation in the Tribulation. It goes something like
this: “If a lost person hears, understands and rejects the Gospel before the Tribulation,
would he or she be able to be saved during the Tribulation?” Some think the answer is
“No,” while others think it is “Yes.” I believe that people will have the possibility to be
saved in the Tribulation regardless of how much they have been exposed to the Gospel
before the Rapture. Here’s why:

WHAT ARE THE ISSUES?
The notion that one who has heard the Gospel and rejects it before the Rapture will
thus be unable to be saved in the Tribulation is argued from 2nd Thessalonians
2:10—12, which reads as follows: . . . and with all the deception of wickedness for those who
perish, because they did not receive the love of the truth so as to be saved. And for this reason
God will send upon them a deluding influence so that they might believe what is false, in order
that they all may be judged who did not believe the truth, but took pleasure in wickedness.”
Proponents of this view contend that God, through the Antichrist, will actively delude
those who do not believe. While this is true, nothing in the passage suggests that the
delusion is the result of an individual’s unbelief due to his rejection of the Gospel before
the Rapture.

FURTHER REASONS AND OBJECTIONS
The Bible teaches that the heart of all humanity is fallen and depraved (Genesis 6:5;
8:21; Jeremiah 17:10; Ephesians 417–18, etc.). All unbelievers, from Adam on down, are
described as being “spiritually dead” (Ephesians 2:1–3) and “blind” (2nd Corinthians 4:4).
Thus, for any individual to believe the Gospel at any time in history requires a
supernatural work of the Holy Spirit to regenerate and open the sinner’s eyes to God’s
gracious offer. Left to ourselves, we will reject the Gospel when it is preached. What
sinner has ever “heard and understood” the Gospel without the miraculous work of
God enabling a dead and blind individual to see and believe? No sinner, on his own, has
ever “heard and understood” the Gospel in such a way as described by the notion I am
dealing with to make such a view feasible. No, unbelievers unaided by the sovereign
work of God will remain in their unbelief and rejection equally during the current
Church Age as well as during the future generation. Thus, every unbeliever will have
an opportunity to hear and believe the Gospel during the Tribulation regardless of the
extent of evangelism that they have received before the Rapture.
Revelation 13:8–10 says the following in conjunction with the rise of the Antichrist at
the midpoint of the Tribulation: “And all who dwell on the earth will worship him, everyone
whose name has not been written from the foundation of the world in the book of life of the Lamb
who has been slain. If anyone has an ear, let him hear. If anyone is destined for captivity, to
captivity he goes; if anyone kills with the sword, with the sword he must be killed. Here is the
perseverance and the faith of the saints.” Such language about belief and unbelief in the
Tribulation—in relation to the Antichrist—as in 2nd Thessalonians 2, does not support
the issue that I am addressing. Instead, it speaks of destiny as the factor determining
salvation: God’s sovereign will! In other words, one’s salvation in the Tribulation will
come about just as it does during our present Church Age.
Some who advocate the view that no salvation is possible in the Tribulation for those
who previously heard the Gospel say that if their view is not true, then some
unbelievers will be given a second chance. This is also faulty thinking based upon a
mischaracterization. The notion of a second chance, which no one will ever receive,
relates to those who have departed this life through death and have gone into eternity
without Christ. That is not what will be going on when any unbeliever is left behind at
the Rapture. Instead, all unbelievers will simply be passing from one phase of history
(the present Church Age) into another phase (the Tribulation). They are not leaving
history and passing into eternity yet. All unbelievers passing from the Church Age into
the Tribulation will continue to have an opportunity to receive Christ until they have
been either saved, killed, or have received the mark of the beast in the second half of
the Tribulation. This is not a second, chance, since unbelievers will still be in history, not
heaven.

EVANGELISTIC URGENCY
It appears to me that the view that I am opposing has been developed by sincere
Pretribulationists who want to press an urgency to their preaching of the Gospel
message. How so? If the Rapture occurred before people accepted Christ, then it
would be the same as if they had already died without Christ. Thus, at that moment, an
extra urgency could be added to the argument that unbelievers should trust Christ now,
since they may never have another opportunity. While it is true that this would
pragmatically increase the urgency of the matter, it is not an idea supported by
Scripture. It is easy to see why believers pleading with sinners to accept Christ would
want to challenge unbelievers with all possible ramifications of their decision.
However, pragmatics are never a valid reason to go beyond the limits of God’s Word.

CONCLUSION
While this is not the most important issue in the Bible, it is one that I am frequently
asked about at prophecy conferences and when I am fielding questions on radio and
television. Since I have not really seen anyone give a written answer. I thought I
would do so at this time. I believe that millions of unbelievers will be saved during the
terrible time of the Tribulation. For that we can all be thankful. Many of those who will
be saved will include some who had heard the Gospel many times before the Rapture.
In the meantime, we, as believers, should make every effort to preach the Gospel of
God’s grace before the Rapture so that as many as possible will be taken at the Rapture,
thus escaping the horrors of the Tribulation. Even though we are intensely interested
in seeing as many as possible come to Christ, the ends do not justify the means. We
should not exceed the bounds of Scripture in our proclamation. Adding threats that
God has not actually made will not result in a single individual being saved who would
not otherwise come to faith. People are saved by the preaching of the Gospel in
conjunction with the power of the Holy Spirit that only God can apply. The imminency
of the Rapture should be used in conjunction with the preaching of the Gospel, but,
again, we cannot exceed the bounds of Scripture. Maranatha!

FacebookTwitterSubscribe
Subscribe to receive all news to your email or phone: [wysija_form id="1"]
onlyrapturesavedtheWILL

Are there varying degrees of punishment in hell?