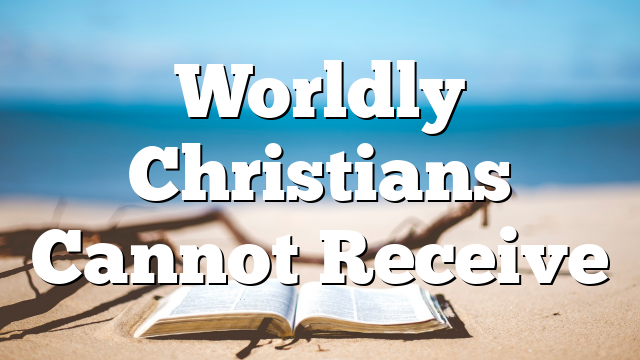 Reading in 1 Corinthians 3 this morning, and saw two lessons in the first three verses:

“And I, brethren, could not speak to you as to spiritual men, but as to men of flesh (carnal/worldly), as to infants in Christ. I gave you milk to drink, not solid food; for you were not yet able to receive it. Indeed, even now you are not yet able, for you are still fleshly. For since there is jealousy and strife among you, are you not fleshly, and are you not walking like mere men?” (1 Cor. 3:1-3).

1 – Worldly, fleshly, carnal Christians are only babes in Christ and can only receive the simple principles of the Word and are unable to grow strong through richer, deeper teaching.

They are not yet open to hear, but preoccupied with worldly concerns, seen in weaknesses like envy, strife and division. We can note here also that jealousy, envy and strife in our relationships is not only worldly, but also childish.

“For though by this time you ought to be teachers, you need someone to teach you again the first principles of the oracles of God; and you have come to need milk and not solid food. For everyone who partakes only of milk is unskilled in the word of righteousness, for he is a babe” (Hebrews 5:12-13).  Notice, the babes are “unskilled in the word of righteousness.”  In other words, they don’t understand who they are in Christ, having been made righteous.  “For He made Him who knew no sin to be sin for us, that we might become the righteousness of God in Him” (2 Corinthians 5:21).

2 – Those who are acting like that are acting like “mere men.” In the Lord, we are far more than “mere men.” We are united with Christ and temples of the Holy Spirit, and we need to rise above the carnal and not walk as mere worldly people, seeing that we have the “righteousness of God” within.

As we realize that we are so much more, in fact supernatural beings with God residing within our spirits by His Spirit, we are able to receive from the Lord and mature, aware of who we are in Christ.  We can “… go on to maturity, not laying again the foundation…” (Hebrews 6:1).

FacebookTwitterSubscribe
Subscribe to receive all news to your email or phone: [wysija_form id="1"]
cannotchristiansreceiveworldly