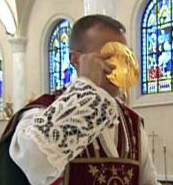 The national conference of the Bulgarian Chaplaincy Association took place on the Bakadjik Mountain near the town of Yambol. Founding members gathered for an annual account of the results of the Association. In the course of the round table discussion, Chaplain M. Buchukov of Agape Bulgaria brought a report of the registration process and its finalization through the Sofia Municipal Court, while Dr. D. Donev gave an account of his interrogation in the Bulgarian Ministry of Defense and consecutive reactions. Chaplain I. Kovachev informed the delegates of the ongoing work of his ministry in the Sofia correctional system and Father M. Yonov spoke briefly of his work as a hospital chaplain. Reports were given of all areas of chaplaincy ministry in Bulgaria as delegates from all regions of Bulgaria addressed current issues concerning the future strategy of the Association. The assembly further discussed issues of national security, Bulgaria’s status in the European Union, NATO’s personnel expected to arrive in Bulgaria this fall, chaplaincy educational endeavors as well as various problems and solutions on a local level of chaplaincy ministry. The attendants moved toward a declaration for the official legal reestablishing of chaplaincy ministry in Bulgaria. This was the second annual work meeting of the Association since its conception in August of 2006.