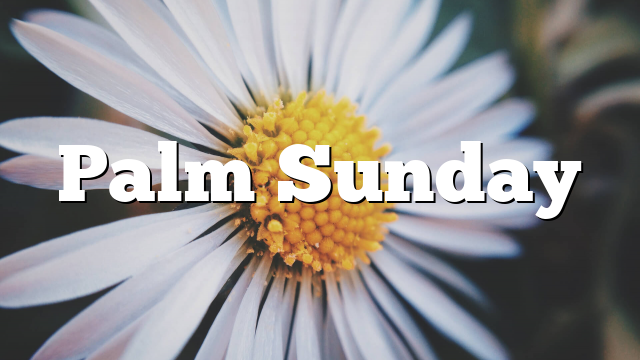 One week before the Jewish Passover and shedding of the blood of Lamb at the Temple, Jesus entered Jerusalem

When people talked about him, there were whispers about the emergence of the messiah. Some believed that the king had finally arrived. So, things were about to change. The mighty one was about to flex, and everything was going to change.

Israel expected the triumphant king to come in on a warhorse. He would restore the centrality of Israel and make the besieged Hebrews the focus of God’s story.

But instead, Jesus rode into town on a donkey. When he heard the Greeks and outsiders were asking about him, he said that it was time for him to die.

To the victory-minded Jews, this was bizarre. Nothing of what Jesus said made any sense. Most forgot the words of the Prophet Zechariah. He said,

I will remove the battle chariots from Israel
and the warhorses from Jerusalem.
I will destroy all the weapons used in battle,
and your king will bring peace to the nations.
His realm will stretch from sea to sea
and from the Euphrates River to the ends of the earth.
(Zechariah 9:9-10).

Jesus was fleshing out the old prophetic story and the mysterious work of God in the earth. Things appeared one way but they were actually entirely different.

Palm Sunday is about upending everything.

What have you learned in this difficult season about letting God’s rule be manifest in weakness and pain? What does it mean to be a part of an upside-down Kingdom?

FacebookTwitterSubscribe
Subscribe to receive all news to your email or phone: [wysija_form id="1"]
palmsunday

Draw Close in the Good Times