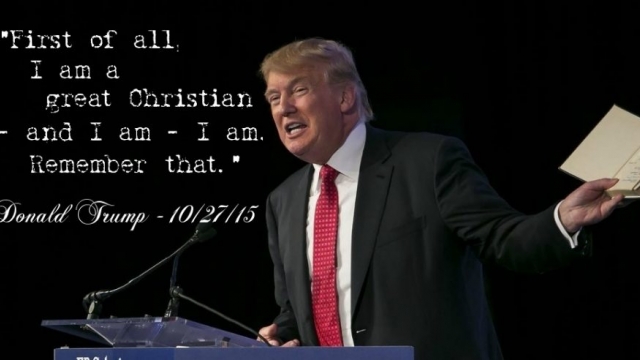 President Trump’s moral weakness became (even more) glaringly evident this week in his response to the so-called ‘Alt Right’ rally in Charlottesville featuring the Klu Klux Klan, Neo-Nazis and White Nationalists that resulted in the death of one woman named Heather Heyer and injured many others.  Trump’s ‘both sides’ equivocation gave encouragement to racists groups who applauded his response, and caused deep pain in most Americans.

Yet President Trump’s failure has provoked serious responses from some unexpected quarters.

The Manufacturing Council and The Strategy Policy Forum were both seeing mass defections by CEOs seeking to distance themselves from the President before Trump decided to disband the councils instead of facing more humiliation.  The President’s Committee on the Arts and the Humanities followed suit writing a harsh letter of resignation with paragraphs formatted in such a way as to spell R E S I S T.

There is, however, one advisory group that remains largely intact and resistant to any calls to moral accountability: the President’s Evangelical Advisory Board, whose members are listed below. As of the writing of this piece, only one of this board has separated himself from the hurtful and racist apologetics coming from the White House.

A. R. Bernard, who is Founder, Senior Pastor and CEO of Christian Cultural Center in Brooklyn, NY issued a statement on social media in which he cited a “deepening conflict in values between myself and the Administration.” 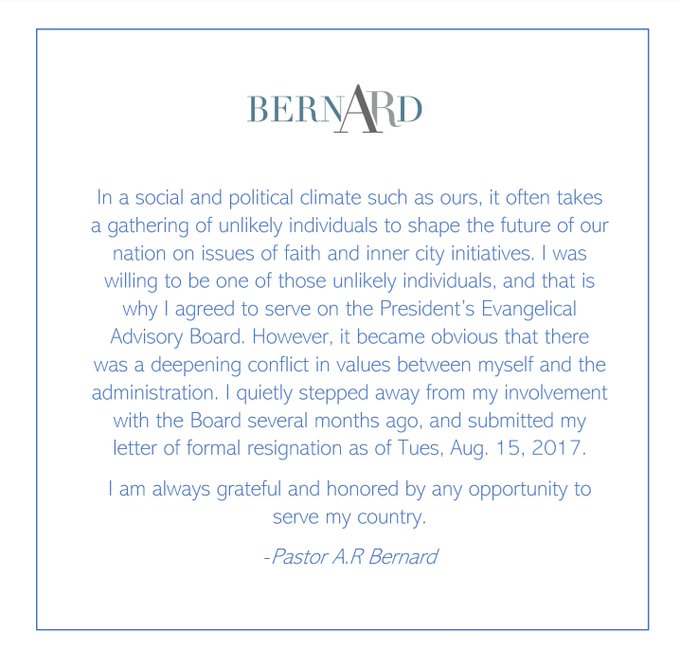 My statement regarding my resignation from the President’s Evangelical Advisory Board.

Aside from this one example of courage from an African American member, the Evangelical Advisory Board has been either silent or overtly supportive of the President’s response to the open displays of racism and anti-Semitism on display in Charlottesville.   Indeed, Jerry Falwell Jr. took this opportunity to praise the president in a tweet for his “bold truthful stmt about #charlottesville tragedy.”

It seems incredible to those of us who dare to think that people who profess to follow a dark skinned Palestinian Jew would be hesitant to call out President Trump for his clearly disastrous and harmful rhetoric.  Yet, thus far they are sticking with him.

One person who isn’t surprised is Dr. Robert Jones, CEO of  the polling and research firm PRRI and whose book The End of White Christian America is crucial reading for understanding the reaction of White Evangelicals to this President.  Jones told Voices:

Also note: Given white evangelicals’ own checkered past supporting segregation and remaining silent about white supremacy groups (something I covered in my book), there may in fact be widespread agreement with the remarks.  For example, we conducted some recent analysis of perceptions of the Confederate flag, and found that 72% of white evangelicals say that they see the Confederate flag more as a symbol of southern pride than as a symbol of racism.

So, while many Americans would like for the Evangelical Advisory Board to either help Trump see the error of his ways or leave the Board, it seems unlikely that at least the white members have any inclination or willpower to do so.

As we approach the ten month mark of the 2016 election, it is worth remembering that the majority of White Christian Americans voted for Trump with more than 8 in 10 white Evangelical Protestants, and a strong majority of white Roman Catholics and Mainline Protestants.

Those votes for Trump have confirmed for many of our black, brown, and Asian Christian neighbors that white Christians are willing to support someone who perpetuates white supremacy; who believes that men have the right to insult and abuse women; who routinely bullies and insults his critics; who glorifies wealth and success. All in favor of our own personal interests. Which means that now, support for Donald Trump has made Christianity seem insincere and self-centered rather than the just and generous way of Jesus Christ attested to in Scripture.

Today we see another crisis moment like the election when the very legitimacy of American Christian leaders, and especially Evangelical leaders, is in question.  While America hopes that they will provide a moral compass for this out of control, immoral presidency, we fear that they will fail, and in doing so fail the very Lord and faith they profess.

Please sign the petition asking VP Pence: Publicly Declare That White Supremacy Has No Place in the White House!

Below are the names of President Trump’s Evangelical Advisory Board

Creative and Productive – A Lesson from the Soil