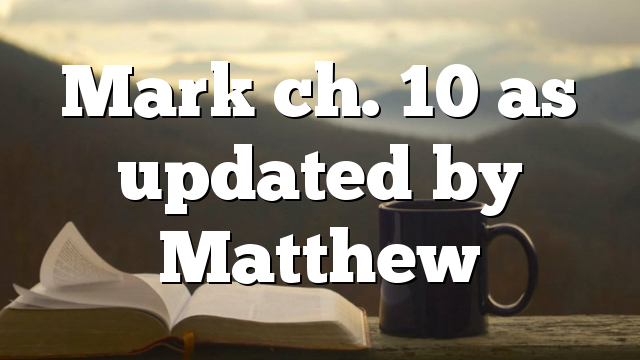 There is a difference between the questions which the Pharisees ask Jesus. Matthew adds “for any cause”

to the words of Mark, giving a universal usage to the meaning and application of divorce.

Mark puts it as a question by the disciples, while Matthew presents it as a saying of Jesus.

[exce[tional clause] Mark refers to both man and the woman committing adultery in a case of divorce, while Matthew reduces to only the man. Mathew has an addition to the divorce case, which neither Luke nor Mark record. It refers to celibacy and has six facts about it:

This passage is recorded by all three of the Synoptic writers.

10:13   The original story in Mark is the story of the children being brought to be touched by Jesus. Matthew changes the verb to laying of hands. Obviously his perspective on the Doctrine of Laying of Hands was important at the time of his writing. Luke, however, revises the little children to infants, making the range of their age wider, which was probably significant for him.

10:14 In this verse Mark describes Jesus as being indignant. Both Matthew and Luke, who obviously did not like this characteristic as a part of Jesus’ personality, omit this word.

10:15 While Luke agrees with Mark on the receiving the kingdom of God, Matthew accents on the changing and becoming, which refers to the Doctrine of New Birth.

Matthew also focuses on a particular phrase he likes to use, namely the Kingdom of Heaven. He uses this phrase a replacement of the Kingdom of God used by both Mark and Luke, probably to escape any vain pronouncement of God’s name.

10:16  This verse is in a correlation with 10:13 where Mark uses the word touch. Here he changes to laying of hands is used by Matthew, but omitted by Luke. [blessed]

The story of the rich young ruler has three major subdivisions:

Only Mark mentions that Jesus was preparing for a journey. Matthew omits the adjective good with the word Teacher.

A three Synoptic writers have different description of the man. While for Mark he is only a certain man, for Luke he is a ruler, and for Matthew he is someone who he later calls a young man (Mt. 19:20, 22).

No difference between Mark and Luke, while Matthew omits good teacher as a natural continuation of the context created in the previous verse.

While both Mark and Luke suggest certain that the man had certain knowledge of the law, Matthew obviously has doubts about his proficiency in it?

Mark and Luke agree on the phrase since my youth, while Matthew carefully omits it since it is in a contradiction with his following statements about the age of the man (Mt. 19:20, 22).

Among the three Synoptic Gospels, Mark has the most vivid and descriptive reaction of the man. According to Mark, he is shocked from the radical words of Jesus and grieving because he is not willing to completely follow them. Matthew omits the shock. Luke reduces the emotional condition of the man to being sad.

The financial status of the man is the reason for his lack of spiritual success. According to Mark he posseses many possessions. Matthew carries the same idea. Luke simply describes him as being rich.

10:23 The same contrast as in v. 15 appears. Matthew uses the phrase Kingdom of Heaven, while both Mark and Luke use the Kingdom of God.

10:24 Mark’s repetition of Jesus’s words is later omitted by both Matthew and Luke.

10:25-27 There is no major difference between the three Synoptic writers in this passage. It is interesting to notice that comparing to vv. 15, 23 even Matthew here uses the phrase the Kingdom of God  in v. 25 in agreement with both Mark and Luke.

10:28 We left everything in Matthew and Mark is replaced by We left our homes by Luke.

10:29 Jesus\rquote  saying is expanded by both Matthew and Luke. Matthew adds the enthronement procession of Jesus and the apostles over the 12 tribes of Israel. Luke adds to all of the above the Kingdom.

10:30-31 The list is pretty much the same, beside the changes in Luke, where he replaces fields with wife. Luke also replaces the phrase for my name’s sake with for the sake of the kingdom of God. He also changes the hundred fold from Mark and Matthew to very much more.

Mark repeats the list pattern similar to v.24, where he uses repetition to stress the importance of the passage. All three of the Gospel accounts contain the same eschatological promise.

Both Luke and Mark omit The Parable of the Laborers in the Vineyard. It exists only in the account of Matthew, in progressive correlation with the eschatological promise from the previous verse.

This is the journey Jesus was preparing for in Mk.10:17. As we earlier noticed both Matthew and Luke omitted this preparation. At his point Matthew mentions the direction of the Journey, while Luke remains silent.

10:33-34 The only difference is that Luke only mentions the prophecy about Jesus as a reference, while both Mark and Matthew records it. Only Matthew refers to the killing of Jesus as a crucifixion. Luke adds the misunderstanding of the disciples.

10:35 Mark records that the brothers themselves came to ask Jesus, while Matthew changes the story to their mother coming to Jesus and asking. Luke does not record this particular story.

10:36-40 The dialog here remains unchanged; however, in both records Jesus’  answer is given to the brothers and not to the mother. Matthew omits the reference of Mark to Jesus\rquote  baptism in vv. 38, 39.

At this point Luke suggests a dispute between the disciples, hich is not in a parllel with Mark’s segment. The dispute is in most probability referring to the record on the Sons of Zabedee in the previous passage. The comparison between the Gentile civil-authority structure and the disciples remains the same through all three Synoptic accounts.

Another comparison between the disciples and the purpose of Jesus’ coming. It is omitted by Luke, who adds a rhetorical question as a conclusion to this passage.

10:46 This passage starts with two totally different chronological statements. Mark and Matthew claim that the time of the occurrence of the story was as they were leaving Jericho. In order to secure his previous insert of the story about Zachaeus Luke states that it was as they were approaching the city (Lk. 19:1-10). Furthermore, Mark names the blind man, while Luke does not record his name. Matthew records two blind men instead of one. There is agreement in all three accounts of the place where the miracle occurred, as well as the crowds that were present.

Matthew and Luke reduce Jesus’ response to the prayer of the blind man/men recorded by Mark in details.

The dialog between the blind man/men and Jesus remains the same, beside that Mark uses My teacher, while Luke and Matthew write Lord.

Matthew records the compassion of Jesus; however, he omits Jesus’ words which have a reference to the faith of the blind man/men.

It seems like Mark omits one of the blind men in his early records. Matthew talks about both of them together. Luke places one of them at the entrance of Jericho, the other one in the city (Lk. 19:1-10). However, all three of the Synoptic writers agree on the immediate healing. Luke also adds the reaction of the crowd.

What do you think, theologically, about the new tax proposal?

What do you think, theologically, about the new tax proposal that gives hugh tax breaks to the very rich and will very likely put…