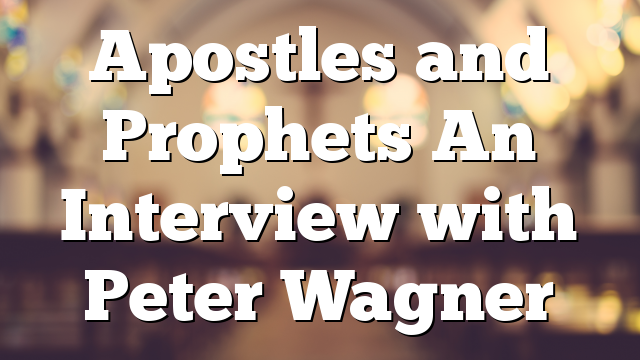 An Interview with Peter Wagner

In the woods behind the Wagner homestead runs an old stagecoach trail that, a century ago, brought countless pioneers to newfound destinations. Most of the trail is so overgrown that it remains virtually indistinguishable from the rest of the forest-except for the portion that runs through the Wagner property.

In sharing on the role of apostolic and prophetic ministry, one gets the feeling of being on a similar trail-a fresh discovery of an ancient path, overgrown with thorns and brush, but leading to new horizons and fresh promise for the pioneering church of this new millennium. Much of Peter Wagner’s life work is focused on clearing the trail. In the interview that follows, he shares discoveries made along the way.

GI: You’ve just finished writing a book on how the apostolic and prophetic ministries relate to each other…

GI: How, in a nutshell, do you define these ministry offices?

CPW: Apostles are anointed by God to set the things of the body of Christ and the kingdom of God in order. For them to accomplish that, and for the rest of the church to accept their work, they need an incredible amount of authority. But that authority can only be an authority that God gives-not self-produced. Prophets are the members of the body of Christ who hear the voice of God more than average, and who communicate messages from God to the body of Christ… That doesn’t mean that apostles don’t hear from God. But apostles who attempt to hear from God only by themselves without bringing prophets into their ongoing ministry sphere are at a disadvantage. Because that’s what the prophets do-they hear the voice of God and communicate these messages to the apostle.

GI: There sometimes seems to be some confusion about the borders of these giftings…

CPW: Prophets hardly ever go out-side the lines and try to set things in order. Prophets are not known for setting things in order, so they usually don’t infringe on the territory of the apostle. But the apostle sometimes neglects the ministry of the prophet. This is one of the problems I’ve found when I first began associating with prophets and apostles. I began to understand they’re the ones making up the new wineskin for the body of Christ, which I call the New Apostolic Reformation. Yet I was very surprised to find that many prophets don’t even trust or like apostles around; and vice versa, many apostles don’t trust or like prophets around.

GI: Have you discovered why? Or what actually works?

CPW: I thought I would simply analyze the relationships that are now in place, but I found very few existing positive relationships. What I discovered is that in terms of the prophets, the way they relate to apostles is that first they must submit to apostles. When I found that many prophets didn’t want to submit to any apostle, I began asking why, and most of the responses I got had roots in the discipling movement. A lot of the prophets were very deeply wounded by some of the controlling spirits that had entered that movement, and because of those wounds they had chosen not to submit at all, rather than change the way they submitted. I would say that is the major factor inhibiting prophets from relating to apostles.

GI: And the apostolic?

CPW: My conclusion is that apostles simply haven’t understood the role of prophets. It’s not that they have under-stood it well and rejected it, it’s that they just haven’t understood it. Some of them, true, have been burned by flaky prophecy. Some of the things Dr. Bill Hamon warns about in his book Prophets Pitfalls and Principals have wounded a lot of apostles. And so rather than saying ‘this is a mistake and we need to correct it,’ they’ve just generalized it and said ‘this is the way all prophets must be’ and have therefore not desired to relate very closely to prophets.

GI: Not a surprise then that the barriers are up. So how do you get apostles and prophets together? Has the Lord given you a strategy?

CPW: First of all, I try to give a positive interpretation to different streams and different styles of implementing the apostolic and prophetic movement rather than setting a standard and criticizing all those who don’t meet the standard that I have set. That in itself gives me a rapport with various different streams that others don’t have. Furthermore, the way I’ve been proceeding is to get apostles together with each other as peers. Once they begin to get together in a meaningful way as peers, then the issue of how we relate to prophets will come up. And I’m prepared to give guidance to the way that issue is handled.

GI: So your gifting is also your strategy-to bring peers together.

CPW: As an apostle, I have naturally begun to develop relationships between apostles. Since I’m not a prophet, that never entered my mind until Cindy (Jacobs) started saying that she as a prophet saw the need for prophets to relate to each other. She began to push the gathering of prophets and brought me into it as an apostle. And finally the Apostolic Council of Prophetic Elders took shape.

CPW: The Apostolic Council of Prophetic Elders is a peer-level group of prophets, now under my apostolic leader-ship. This to me is an example of how prophets relate to apostles on the broader scale. (At a recent prayer conference), six of the prophets were on the platform sharing, and an apostle led the meeting. (note: see the prophetic word issued by the ACPE, read by Peter Wagner at the recent conference, following this article). As to how they relate to each other in different apostolic networks… the jury is still out on that.

GI: You’re hoping that what you’re modeling will eventually catch on.

GI: In that regard, you’re starting a global council of apostles…

CPW: This year, we’re starting the International Coalition of Apostles. John Kelly is the administrative apostle, Chuck Pierce is the prophetic voice, and I am the presiding apostle. We just sent out 200 invitations to selected people around the world to become charter members of this coalition.

GI: Is part of your goal in this to help the body of Christ to identify true apostles?

CPW: Absolutely. The goal is to raise the integrity of apostolic ministry around the world. And part of doing that is to exercise some sort of mutually agreeable “quality control.” That’s part of what we’re doing.

GI: How do you see apostles and intercessors relating together? I know you have a book…

CPW: Prayer Shield is a manual that apostles need to use, and whenever they see the word “pastor,” fill in the word “apostle.” I would hope that every prophet and every apostle has a group of intercessors who are mutually known, who have the gift of intercession, and who are committed to pray for these individuals.

CPW: Apostles who do not have a team of personal intercessors-I don’t believe they can fulfill everything God wants to do in their lives. Because the higher a person goes in the leadership of the body of Christ, the higher they go on satan’s hit list. And the intercessors are the ones who stand in the gap!

CPW: I think one of the hindrances to God’s sending the revival we’ve been praying for has been that the government of the church has not been properly in place. And now that the government of the church is coming into place, we’re already seeing God trusting the body of Christ with things we were totally unaware of previous to this. Once the government comes into place, then God can do what He wants with the body of Christ, and one of the things most of us agree on is that He wants to send the great outpouring of the Holy Spirit that we would call the worldwide revival.So my commitment for the rest of my career is to use the gifts God has given me to help the development of the worldwide New Apostolic Reformation. And this (linking of apostles and prophets) is an essential part!

Reasoning in Righteousness :: By Donald Whitchard

The post Reasoning in Righteousness :: By Donald Whitchard appeared first on Rapture Ready.