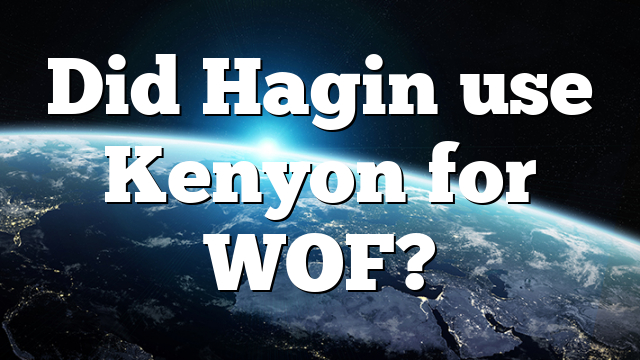 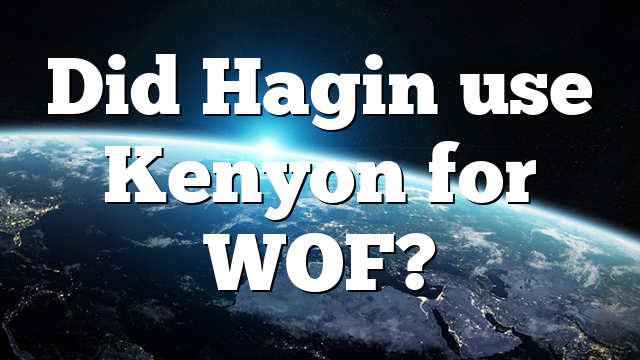 Did Hagin use Kenyon for WOF?

DAN IRVING I know the teaching of EW Kenyon treated the name of Jesus this way, and that it infected Pentecostalism, resulting in the WOF movement, but I’m not aware to what extent this is true for Oneness Pentecostals.  The only personal contact I had with them was one or two services attended many years ago when I was young.

In 1914 E.W. Kenyon, whose later teachings would make him known as the founder of the modern faith movement, wrote an article for Carrie Judd-Montgomery’s Triumphs of Faith magazine on the believer’s authority and binding and loosing.69 Before he began to err grievously, he had contacts with the Keswick movement, so it is likely he was drawing upon the principles Roberts and Penn-Lewis had mentioned two years prior, as well as Meyer’s earlier teaching. In her 1921 book The Secrets of Victory Carrie Judd-Montgomery devoted an entire chapter to binding and loosing, admitting it was a recent perception that had transformed her ministry.

RESTORATION of BINDING and LOOSING

Christian and Missionary Alliance missionary John A. MacMillan really wrote the seminal book on the believer’s authority with his series of articles based on Ephesian 1 in 1932.73 In effect, he developed the theology at that time for the recovered understanding of binding and loosing. The seventh edition of the unabridged version of Penn-Lewis and Evan Roberts’ book War on the Saints (published in 1933) makes reference to MacMillan’s articles in the Alliance Weekly.74 No doubt MacMillan was influenced by his mentor Robert Jaffray and the teaching of Penn-Lewis. His material is referred to by a wide variety of contemporary Christian leaders, including dispensationalists like Merrill Unger, evangelical publishers like Moody Press, evangelical scholars like Professor Timothy M. Warner and charismatic faith leaders like Kenneth Hagin.75 Chinese spiritual leader Watchman Nee, who was influenced by Penn-Lewis, Simpson and Andrew Murray, also taught authoritative “commanding” prayer and the power of binding and loosing in 1934.76 So we see that by the early twentieth century the teaching on binding and loosing as the believer’s authority had proliferated among evangelical leaders.

Parallel with these developments, in 1916 E. W. Kenyon, considered the father of the modern faith movement, also believed in a concept of territorial spirits. Theologian and historian Douglas Jacobsen notes, “Kenyon believed Satan divided the world into a host of separate ‘kingdoms and states, and communities’ and gave various demons control over those territorial domains. Virtually every community was assigned a territorial demon to oppress and control all forms of life in that region of the planet.”12

Further Development of the Concept by John MacMillan

C&MA missionary John MacMillan, perhaps more than any other Christian leader of his day, began to develop more of a concept of territorial influences. Some personality trait weaknesses that are usually considered characteristic of a certain nationality or ethnic group, MacMillan suggested, are “quite as likely to be a working of that undercurrent of Satanic force.”13 He posited the atheism of Russia and the unexplainable submissiveness of its people as due to an occult power, what he calls a “hellish counterfeit.”14 For most heathen religions, MacMillan explained, “Every god is confined to definite territorial limits, outside of which his influence does not extend.”15 MacMillan viewed Daniel 10 as an example of prayer activating God’s interference with “mighty intelligences” manipulating people, governments, and circumstances.

Jesus praying in the Garden of Gethsemane

Jesus praying in the Garden of Gethsemane prayed this: “Father, if you are willing, remove this cup from me. Nevertheless, not my will, but…