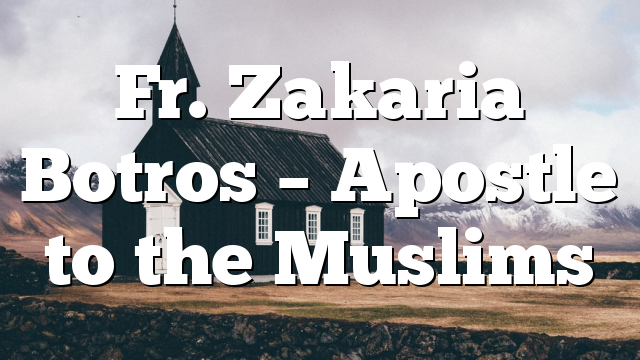 This is not an expected blog topic for an “Anglican Pentecostal,”‘ but I present it because praying for the success and expansion of Fr. Zakaria Botros’ ministry, and giving it financial support, may be one of  the most significant actions the average Christian can do for the conversion of the Islamic peoples.

Fr. Zakaria Botros. (b 1934) became priest as young man in the Christian church in Egypt (Coptic). He served in Egypt as parish priest  where he got  into hot water with the Coptic Pope for his Evangelical viewpoint.  This was sometimes at odds with the “traditions” of the Coptic Church.

The Coptic Church is part of “Oriental Orthodoxy,” a highly liturgical branch of Christendom. It is similar to Eastern Orthodoxy, but separated from both the Catholic and Orthodox churches over the Council of  Chalcedon’s (451 A.D.) definition of the incarnation. This was a philosophical divide, not a real heresy, as is sometimes pictured. In the last decades, and with its current Pope, the Coptic Church has become increasingly evangelical, and is now experiencing a Holy Spirit revival. (See the cover story of Charisma Magazine for June 2013, “Out of Egypt.”)

Fr. Botors was jailed several times by Egyptian authorities for crime of preaching to Muslims. His brother was martyred  for the same reason by militant assassins.  Fr. Botros was severely mistreated in prison  and a given life sentence. Providentially, this was mitigated to forced exile. He went to England and became pastor of a Coptic Church there for eleven years.

In 2003 he began the radio and TV program, “Truth Talk.” He discussed the contradictions and difficulties of Islam and encouraged conversion to Christianity – the very things he could not do in Egypt. Fr. Botros brought a special, perhaps even unique, expertise to his program. He was a native Arabic speaker, and studied Islamic theology at Cairo University. Among the things he learned was the fact that Islamic scholars were distressed that there were variant early texts of the Koran, something hidden to the Islamic public. He became well acquainted with not only the Koran, but the Hadith, the saying of the Prophet Mohamed, and the Ulema, the revered commentaries of famous Islamic teachers.

The audiences of “Truth Talk” grew exponentially, especially with the new satellite technology which became widely available to Islamic audiences in the last decades.  These weekly ninety minute broadcasts often included guests who were converts from Islam, and always included a segment for live call-in questions.  Some callers have been quite out of control with rage, but could never counter his reasoning or citations. By 2010 these broadcasts were attracting an incredible 60,000,000 viewers from all across the Islamic world.

Week after week Fr. Botros deconstructed Islam and the Koran in a scholarly and polite way that was utterly devastating. More importantly, he gently and effectively encouraged his listeners to reject the stringent legalism of Islam and accept Jesus as savior and son of God. Two instances of his apologetic and “deconstructive” ministry bear telling even in this brief blog.

Fr. Botros cited the Hadith to the effect that Mohamed encouraged forced concubinage.  He  then asked if present day Islam still condones sexual slavery. As always, he ended his presentation with the polite Arabic phrase, used in formal  theological discussions, which means, “please answer with evidence and proof.”  This raised a storm of controversy all over the Islamic world. On Egyptian TV, a very popular woman Islamic talk show host, and one known for her piety, asked two Islamic scholars to reply to “that man’s” accusations. They could not answer, and one stormed off the stage.

The second, and most famous of Fr. Botros’ theological fire-storms, refers to the well know Koranic  command that a woman can be accompanied in public by a man only if he is her husband or a male family member. Again the Hadith provided an exception. Mohamed proclaimed that if a strange man needed to accompany a woman, he could do so licitly if he nursed at the woman’s breasts. Again, meticulous citations were provided.  One prominent Egyptian Imam and Hadith scholar answered Fr. Botros by issuing  a fatwa  to the effect that this was indeed permissible action. The Egyptian public, and especially women,  exploded in rage and disbelief, and the Imam was forced to rescind his fatwa. But the facts of the issue, were laid bare, so to speak.

Fr. Botro’s constant deconstruction of Islam has come at the providential moment when many moderate Mohammedans are in crisis over the nihilism, cruelty and violence of the jihadists. Millions have been converted by his ministry, although it is impossible to know or record exact numbers. Over one thousand persons a week jam his prayer lines and offer their lives to Christ. All of this is “just right” timing with the activities of the Holy Spirit in the massive numbers of  visions and dreams of Christ occurring among the Islamic peoples. (See the book by Tom Doyle, Dreams and Vision: Is Jesus awakening the Muslim world? (Nashville: Thomas Nelson, 2012), available here.

Of course Satan was not inactive either. In July of 2010 Fr. Botros program was pulled off the satellite – no explanation given (probably a terroristic threat). Many in Islamic countries celebrated the event as an answer to prayer. He was shut up (but not answered). It took his ministry until April of 2011 to regain another satellite link. The present satellite has less coverage than the previous one and his audience numbers have not fully recovered.

Psalm for Egypt after Morsi:

When the blood and dust clears, Oh Lord,

And the people of Egypt are exhausted by contention and violence,

Let the Coptic Church in Egypt arise to its glory and destiny!

After mob attacks on its churches,

And trucks that rolled over innocent protesters,
After the countless injustices by Islamic officials and policemen,
Let the Coptic Church in Egypt arise to its glory and destiny!

For centuries your Ancient Church has lived a timid life.

Offering worship and incense, sermons and baptism.
But forbidden to proclaim the Gospel publicly,
Afraid to endanger those they might convert.
And slowly dying from harassment and persecution.

Let the church in Egypt arise to its glory and destiny

A Coptic Church filled with the Spirit, proclaiming its Savior,

And having signs and wonders follow,
To amaze the Muslims as they watch.
Diseases healed, limbs restored,
And the bitterness of their hearts erased by the love of Jesus.
Let the Coptic Church in Egypt arise to its glory and destiny!

It has brought us nothing but loveless legality and bitterness,
Bloodshed and tyranny are its heritage.
Much better is sweetness of the Gospel,
And the forgiveness of the Man who died on the cross…”

Let the Church in Egypt arise to its glory and destiny!

P.S. Please let me know if your church is interceding for the persecuted Church in Egypt.

Merry Christmas from all of us