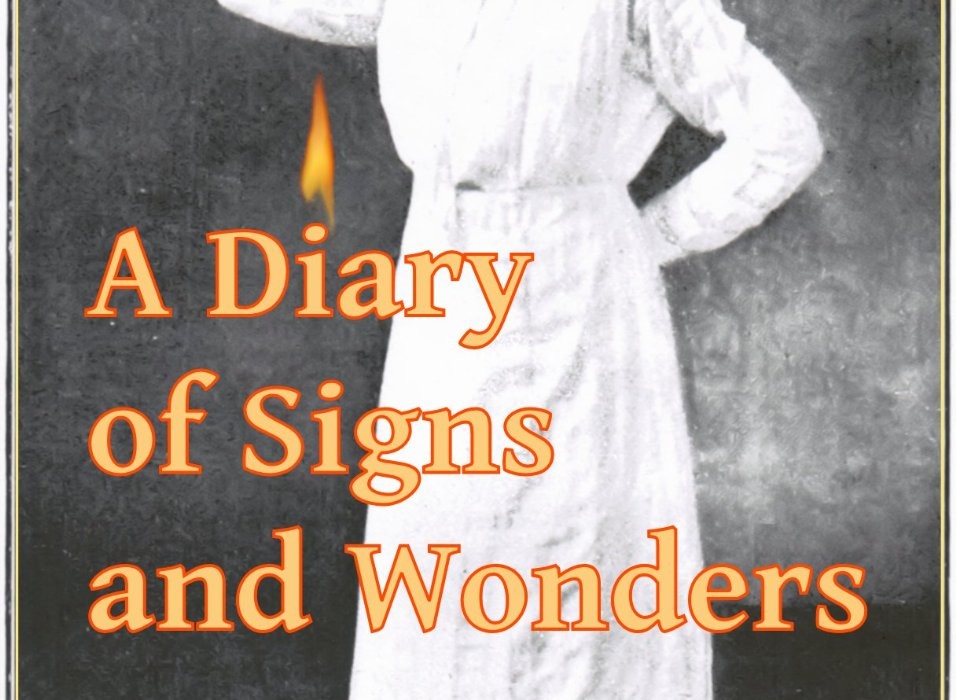 Extra Biblical manifestations? Consider Maria B. Woodworth-Etter, who was preaching one day at her tabernacle in Indianapolis, and when she raised her hand with her pointer finger up to make a point, the Spirit of the Lord caused her to be frozen in that posture, for three days. This “extra”-Biblical manifestation is found in one of the gospels, in John 21:25: “And there are also many other things which Jesus did, the which, if they should be written every one, I suppose that even the world itself could not contain the books that should be written. Amen.”

Link Hudson [09/29/2015 11:47 PM]
What did she experience during the three days. Peter and Paul both had supernatural experiences while in trances.

Peter A Vandever [09/29/2015 11:56 PM]
You have a problem with Pentecostals. Not sure why but think the Holy Spirit should sit down and behave himself while in the pretty church 🙂

I don’t agree with teaching people to be undiscerning about whether ‘weird stuff’ is from God. There suspect are plenty of weird ‘manifestations’ that are people seeking attention, people responding to suggestions, or worse. Pagan ‘manifestations’ would be a prime example of that.

I believe in the power of God, too. But we should seek for the upbuilding of the church.

John Kissinger [09/30/2015 12:41 AM]
I think the story with the “freezing” goes differently, but what is SO extra-Biblical about something that is in the Bible? Even Charles Page is chosen-frozen. Is this extra-Biblical as well? #chosenfrozen #calvinator

Jimmy Pearson [09/30/2015 1:01 AM]
This is a subject I’ve been thinking on recently. I currently attend a church that does not believe God ever speaks outside of scripture. I’ve never had the extra biblical manifestation conversation but I can imagine how it would go. Having been raised Pentecostal this is probably the first time I’ve thought deeply about it. I am very suspicious of anything not scripturally supported but I am not willing to automatically discredit it either.

Peyton Gurley [09/30/2015 11:44 AM]
I know the latter rain movement caused a lot of Apostolic Pentecostals to be scared of being fleshly when administering gifts. So you don’t see a lot of Prophecy or words of wisdom in a lot of churches. Fortunately, we have a lot of freedom at our church.

Charles Page [09/30/2015 12:53 PM]
“getting in the flesh” was scare words to Pentecostals and it caused a suppression of the gifts of the Spirit. It seemed to in sure only an elite few would minister the gifts, the pastor and a couple others and everyone else were spectators.

Link Hudson [09/30/2015 4:29 PM]
Peyton Gurley, everyone having a word can be a threat to the priestcraft. If people’s ‘words’ aren’t from God, that can be very harmful and dangerous, too.

But Paul presented all prophesying in a positive light in I Corinthians and gave commandments of the Lord on how to prophesy in an orderly manner. He wrote, ‘For ye may all prophesy one by one….’

Some of the Latter Rain doctrine is mainstream now with Pentecostals and Charismatics, like belief in ‘five-fold ministry’. The idea of prophecies imparting spiritual gifts and prophecies to confirm certain ministry roles, at least in some cases, is Biblical.

To hear some Pentecostals who didnt’ go with the Latter Rain movement, you might come away with the idea that they prophesied people to be apostles who didn’t do anything apostolic and that a lot of prophecies weren’t fulfilled. I can’t say that that is the case, though. There was a split with the A/G, with some churches leaving and going independent. And maybe just some of the bad stuff was repeated. I’m sure people could come up with a list of bad things done in A/Gs, too.

Link Hudson [09/30/2015 4:33 PM]
But I suspect some of the too-careful extrabiblical rules some A/G folks and other Pentecostals and Charismatics have about prophecies probably came as an over-reaction to the Latter Rain movement, or possibly abuses within the A/G or other groups.

For example, rejecting or being hypercritical of a prophecy if it isn’t confirmation. I’ve heard people say if someone prophesies your calling, and God hasn’t told you first, that it isn’t true. But we see babies’ callings and roles prophesied, sometimes before their birth, in the Bible. Who changed the rules? Who has the right to limit the Spirit from saying anything He wants to?

It’s great when prophecy is confirmation. It’s great when you hear a prophecy, and you can hear the voice of God in it and you know in your spirit that it is the real deal. But what if you are just going through a rough patch where you don’t seem to be sensitive to these things? Or what about the spiritually immature believer who hasn’t learned to discern? Or what about believers who just have different gifts? Can’t God speak to that person through prophecy, something that they didn’t already know?

Some prophecies about me have told me things about myself that I knew, combined with some things I didn’t know or at least a different perspective on something that I wasn’t familiar with. And I can go one place and someone prophesies something about me, and go elsewhere a few months later and someone else prophesies that same thing. Usually it isn’t word-for-word the same, but some aspect of the message is repeated elsewhere. So some prophecies are confirmations of other prophecies, not just confirmation of whatever you’ve got going on inside your head or heart.

Dwayne Mull [09/30/2015 5:23 PM]
If Christians have reason to doubt the validity of a manifestation, then try the spirits, or test the spirits as the scripture says. Any spirit that confesses that Jesus Christ is come in the flesh is a spirit from God. Any spirit that denies that Jesus Christ is come in the flesh is a spirit of antichrist. The aforementioned statement is certainly scriptural! If God wanted to fill someone’s painful cavity in their tooth, for example, with a miraculous gold filling, then that person sure would save a lot of money from having to go see the dentist and going through even more pain in the dentist’s chair. If the Spirit behind the gold dust confesses that Jesus Christ is come in the flesh, then that is a godly spirit. God is glorified in doing a miracle for someone’s tooth, and they may even be able to provide documentation to substantiate the miracle. On the subject of the Restoration Latter-Rain movement, my first pastor was at that revival. One of the extremes that came out of it, unfortunately, was a concept taken into left field about the scripture that talks about the manifest sons of God belief. And, NO ONE, BUT NO ONE is to appoint or call someone to the ministry by the laying on of hands to tell them that God is calling them to be a pastor, etc. NO ONE gets to choose what they are called to. That is God’s decision, not ours. God appoints – God anoints – the laying on of hands is for the imparting of a spiritual gift, and confirmation through personal prophecy, but not appointing people to ministry. We are all responsible for answering the call of God on our lives that He tells us that we are to do. God’s sheep know His voice, and another, they will not follow.

Charles Page [09/30/2015 6:08 PM]
Wherefore I give you to understand, that no man speaking by the Spirit of God calleth Jesus accursed: and that no man can say that Jesus is the Lord, but by the Holy Ghost.

Peter A Vandever [09/30/2015 9:46 PM]
Latter Rain revival was fresh manna but Pentecostal couodnt admit their season was over.