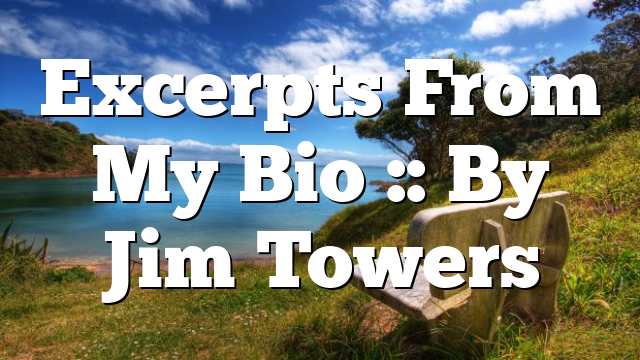 Being a new “Born Again” Christian, I plunged headlong into the Holy Bible and began to memorize scripture verses. I loved everything about this book. “I can do all things through Christ, who strengthens me” was one of the first of many verses I took to heart – literally.

Years ago, when I snagged my first television commercial, I had a full head of hair. Today -not so much. So, with God on my side, I was full of confidence and myself. After two and a half years of drama studies, I got my first paying commercial, and the pay was good – very good. I signed a contract with the producers for a year and a contract to join Screen Actors Guild (a union for professional film actors without which you didn’t get work and most actors would kill for) as well.

Immediately on the heels of that miracle, I was cast for the Miami Promotional – “Miami’s for me,” and I became a local celebrity. I loved this work that came so easily to me. (While in the first and second grades, I was always willing to sing in front of the class and to do big drawings with colored chalk on the blackboard while the rest of my classmates watched.) Some people say I was a precocious child.

After a couple of years of Bible study, I thought, “I can do all things through Christ who strengthens me,” So, my new wife and I went to Hollywood, California. It was a cesspool of sin and debauchery, but we found a Beverly Hills Baptist church and settled in.

While there, I met Tom Lester (Eb) of Green Acres fame at our new church. He was one of the finest people I ever met. He invited me to go get a few groceries with him at a local supermarket.

The former Postmaster General Lawrence F. O’Brien, who worshiped there as well, took a liking to me and invited us to lunch at his beautiful house in the Pacific Palisades on a cliff overlooking the Pacific Ocean. He, too, was very cordial.

The parents of Kirk Cameron were also members at our new church but kept to themselves; he probably attended Hollywood Presbyterian, where most Christian actors went to worship. We made friends with the people at this church easily.

It was nearing Christmas, and film work came to a standstill. I was walking around the MGM studio back lot searching for a friend who was a stagehand. Caroline had taken work as a secretary at MGM, but when her boss came onto her, she quit.

Things were beginning to get rough. Then I met a new friend, Paul Hanes, who lived right down the street from us, just off Wilshire Boulevard. By faith, we had prepared Christmas dinner for the homeless even though we were now strapped for cash since Caroline had quit her job. I asked God to provide for us, somehow.

My new friend Paul Hanes, whose wife worked at CBS in wardrobe, came over to ask us if we would watch over their little poodle while they went north to spend Christmas with family. We agreed to do so.

The next day, we went to their house, and the young couple showed us around, introduced us to their little dog, and showed us where its food was. Then, without skipping a beat, Paul said, as he walked to the oversized refrigerator stuffed with food and opened the two big doors, “Please feel free to help yourself to everything in there. We had a Christmas party last night for the employees of the CBS wardrobe department, and these are the leftovers.” There was turkey, ham, beef, cakes and pies, and all sorts of condiments and side dishes, plus an assortment of drinks. As he opened the bottom freezer drawer, he said, “There are different ice creams and other goodies in here.” And to think, Caroline and I thought we were going to eat meagerly during Christmas.

By now, we should have learned that God was our provider and helper in times of trouble.

Soon after, while helping a small crew of men renovate a house in burned-out Watts, I stepped out onto the sidewalk to retrieve a tool when I heard a woman screaming, “HELP, HELP; I’M BEING ROBBED! I turned in the direction of the sound, and immediately, a young man came running past me, almost bumping into me. I determined that he was the thief, so I gave chase. I was gaining on him when he turned and reached into his jacket pocket and pulled out a handgun. He turned back toward me, stopped, and took aim. Immediately, I threw myself behind a car sitting in a driveway. The first bullet whizzed past my head and into a house. The second bullet went into the ground near my feet. I watched from behind the car as the young man ran into an alley and disappeared.

Just then, I heard someone with a sense of urgency ask, “Which way did he go?” It was a carload of undercover policemen. The driver said, “We’re undercover cops; come on – get in. I hopped in the car with them and showed them where I had seen the thug turn in. When we got there, they all jumped out and gave chase on foot. I went back to what I was doing, giving thanks to God for being able to dodge the bullet. That’s how bad it was, and it’s just as bad or worse now.

We were now short one hundred and thirty-five dollars to meet the month’s rent. A lady friend who went to our church asked us over for coffee one weekend, and while there, she had a visitor. The little old woman was bent over and frail, and she had coffee with us. Finally, she said, “I have two dear cats who need to be given water and fed every day for a week. Our friend said, I’m going away, or I would do it, dear.” I piped up, “I can do it for you; I’m not doing anything anyway.” “I’ll see you tomorrow at eight,” she said. I got her address and went there the following morning.

The place was a small bungalow on a side street with the typical California red-tiled roof. As I walked in, I could smell that this was indeed a house where cats lived. I cleaned the litter box and fed the cats while she went back to bed sick. “When my nurse comes, please open the door for her,” she said. “Ok,” I replied, and as I tidied up a bit, I noticed a prominent photo on the old lady’s dresser. I recognized the masculine face and short white hair; it was one of my favorite matinee movie stars, JEFF CHANDLER! When I asked her about it, she said, “He was my beloved son Jeff.”

When the week was up and I was getting ready to leave, the little old lady called me over and handed me an envelope. “I pay for everything; here, take it,” she said as she thrust the envelope into my hand.

As I walked away from her house, I peeked at the check inside. Scribbled on it was the unlikely amount of one hundred and thirty-five dollars!

God had come through for me once again.

Visit my website www.propheticsignsandwonders.com and you can write me at [email protected].

The post Excerpts From My Bio :: By Jim Towers appeared first on Rapture Ready.