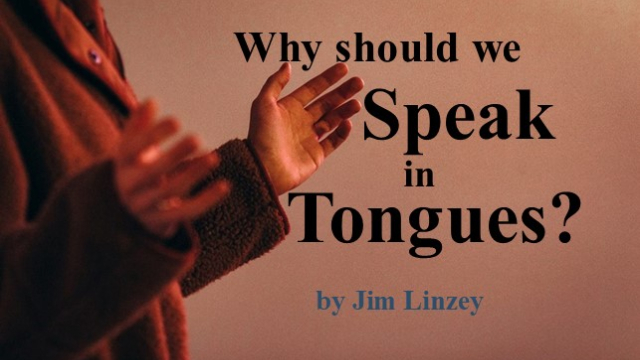 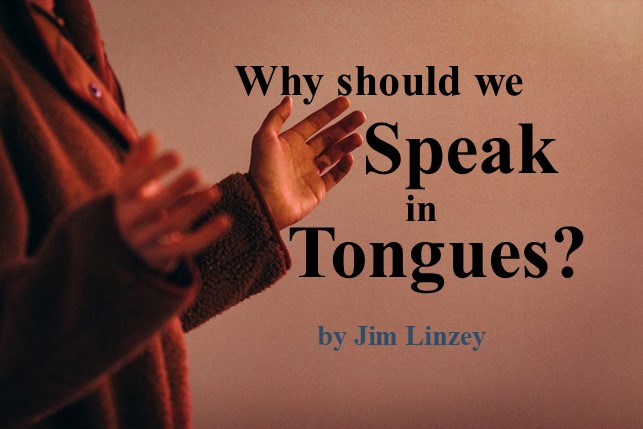 This guest article by chaplain, editor, author, and speaker James Linzey presents biblical answers about why followers of Jesus should pray in tongues. See the note from the Editor below for more about the perspective of this article.

Why speak with tongues? There are many reasons for speaking in a spiritual language. Primarily, though, the Scriptures require it. The apostle Paul commanded us, saying, “Pray in the Spirit always” (Eph. 6:18). Jude commanded it in verse 20, saying, “Pray in the Holy Spirit.” Jesus said it was one of the signs which were to follow the ministry of Christians: “And these signs will accompany those who believe … they will speak with new tongues …” (Mark 16:17). If Scripture commanded it only once, then it is a command, to be obeyed.

Speaking in tongues is one of God’s gifts, and Christians need all the gifts God offers.

The supernatural language is a miraculous manifestation of God’s power, but it combines both human and divine elements and requires both human and divine initiative. Don Basham, in A Handbook on Holy Spirit Baptism, claims that tongue-speaking is “truly a co-operation between the Christian and the Holy Spirit” (page 86). Also, to pray in tongues is a matter of one’s will according to 1 Cor. 14:14-15. Here Paul says that when he prays in a tongue, his spirit prays, not simply his mind. He indicates that he wills to pray and sing with his spirit— it is a decision he makes, not something forced on him. Speaking in tongues is a matter of the will as is any other action.

Misunderstanding what role the speaker has in tongue-speaking has hindered some people from ever confirming the reception of the Holy Spirit through tongues.

Acts 2:4 states, “And they were all filled with the Holy Spirit and began to speak in other tongues, as the Spirit enabled them to speak” (MEV), or “…as the Spirit gave them utterance.” As they spoke, the Spirit filled their mouths. The Holy Spirit did not tell them what to say, nor did He speak through them. He simply gave them the ability to speak. Albert Hoy says that the disciples “used no conceptual forethought of their own in the vocalization” (“Public and Private Uses of the Gift of Tongues,” Paraclete 2, Volume #4, page 11).

In the same manner, the Christian who speaks with tongues will realize that he does not know beforehand what syllables he will utter, but he will speak “not as he receives a mental impression, but as the Spirit gives him the utterance” (Hoy, page 12). Tongues is “the sign of the baptism of the Spirit…. All gifts which the Spirit brings and gives had already been given individually before Pentecost, except for speaking in other tongues with interpretation! Thus, this was the new sign by which the baptism of the Spirit was known” (says F. Kramaric, cited in The Pentecostals by Walter J. Hollenweger, page 342).

Harold L. C. Horton says in Baptism in the Holy Spirit: A Challenge to the Whole-hearted Seekers After God, page 13, that “The evidence of water baptism at Jerusalem, Caesarea, and Ephesus, was not faith nor love, but wetness! It is the same today. The evidence of the baptism in the Holy Spirit at Jerusalem, Caesarea, and Ephesus was neither faith nor love, but tongues. So, it is today. To be baptized merely ‘by faith’ or tradition without evidence, is not to be baptized at all—either in water or the Holy Ghost.”

Many ask whether speaking in tongues is truly the primary confirmation or sign of the outpouring of the Holy Spirit. It is easy to make compromises, but only biblical evidence can be considered proof of the answer. It would seem illogical to use the Old Testament or the Gospels as proof that speaking in tongues is a sign of the baptism with the Holy Spirit because they were written before the outpouring on the Day of Pentecost. It would also seem ill-advised to use the Epistles of Paul as the proof because they are pastoral letters dealing with problems and perplexities of established churches where speaking in tongues was considered normal.

Contemporary experiences are valuable but cannot be considered as proof of tongues being the initial evidence because they would be interpreting after the fact. Consequently, the proof must come from the book of Acts, which records the only known examples of the experience of the baptism with the Holy Spirit among the early Christians.

Note from the Editor

In this guest article, James Linzey is speaking about praying in the Spirit, also known as praying in tongues. Most Pentecostal/charismatics believe that every follower of Jesus may and should pray in the Spirit, and they see praying in tongues as distinct from the gift of tongues with interpretation that operates in a gathering of a community of believers. Linzey is approaching this subject from a classical Pentecostal perspective. Other renewalists (Pentecostals and charismatics) have a different approach about how to interpret what the Bible says about tongues in relation to the Baptism of the Holy Spirit. If you want to learn more, there are many articles available at PneumaReview.com that discuss tongues and the Baptism in the Holy Spirit. Consider starting here.

An Appreciation of Martin Luther: On Why Many Denominations Do Not Destroy the Unity of the Church