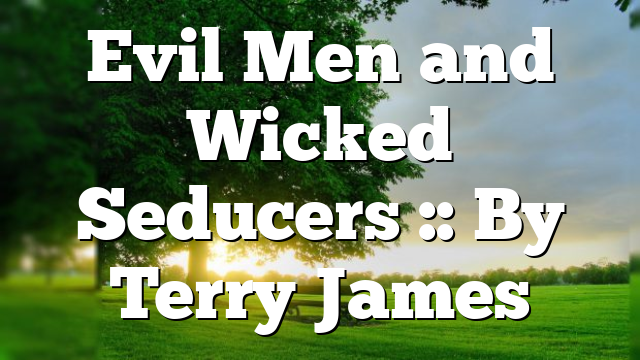 There is no dearth of information–evidence to address the prophecy by the Apostle Paul for the time so near the end of the Age of Grace.

“But evil men and seducers will wax worse and worse, deceiving and being deceived” (2 Timothy 3:13).

We now have in our once biblically-influenced nation an entire public education system steeped in every sort of evil. And the evil begins at the most basic level.

Kindergarteners are now exposed to the likes of drag queens and their perversions. Grades above that level are routinely taught the anti-God lessons of transgender and CRT (Critical Race Theory) and are inculcated on a regular basis that America, as founded and over the years, has been a tyrannical, colonial master of peoples around the world.

History is revised–in many cases completely rewritten—to make textbooks present fabrications and outright lies. Marxist socialism and even worse are foisted upon the students of secondary education and, particularly, those matriculating within colleges and universities.

Human life is counted by these anti-God educators as a problem. Mother Earth suffers because human beings are destroying her, thus abortion is preferred to bringing, in particular, the dark races to birth. (More than 40 percent of the millions of babies murdered in their mothers’ wombs by the likes of Planned Parenthood are African American.)

Abortion is closely allied to LGBTQ etc…etc… Abortionists and LGBTQ etc…etc…evil seducers help achieve the depopulation of “eaters” who are accused of destroying the planet.

Several generations within the nation have been seduced to believe that heterosexuality and homosexuality are equally acceptable within cultural and societal norms. As a matter of fact, anyone who adheres to those previous traditional views of the matters involved is now deemed to be, at best, homophobic bigots worthy of being publicly ostracized at every turn and, at worst, deemed to have mental illness. Homosexuality itself, of course, was a thing psychologists and psychiatrists, in more rational, past times, pointed to as aberrant behavior, or as mental instability in clinical terms.

Now evil men who propose creating transhumanism (superhuman/technology hybrids produced by science) have emerged and are in the process of seducing all of humanity in anti-God ways that are even more egregious than those inflicted by anti-God, anti-American educators since the 1960s. These exhibit the earmarks of influence of the demonic realm. Ephesians 6:12 is in view as never before. Examples of this end times manifestation of evil men and seducers are illustrated through the following information.

One of the most enigmatic, sensational, and misguided thinkers of the last 10 years is Israeli historian and pop philosopher Yuval Noah Harari. His book Sapiens, published in English in 2015, sold over a million copies as it told the story of mankind’s evolution. His 2017 book Homo Deus predicts a transhumanist future, a world where technology fundamentally reshapes what kind of entity human beings are.

“We humans should get used to the idea that we are no longer mysterious souls. We are now hackable animals,” he told attendees at the 2020 World Economic Forum annual meeting. “By hacking organisms, elites may gain the power to reengineer the power of life itself,” he said two years earlier. “This will be not just the greatest revolution in the history of humanity. This will be the greatest revolution in biology since the very beginning of life 4 billion years ago.”

Yuval Noah Harari often blasphemes in his pronouncements that man with his AI ventures is replacing man’s concept of the God of Heaven. Some even believe him to be Antichrist in the making. I don’t believe that is the case. But he exhibits the Antichrist spirit, to be sure.

His work with the likes of Klaus Schwab, Bill Gates, and others within the World Economic Forum does look to be a major platform that might produce the satanic regime headed by the man of sin, the son of perdition.

Paul’s prophecy is front and center as the world grows ever darker and evil men and seducers grow worse and worse. But this all means that we are to serve as God’s light for those who do not accept Heaven’s grace gift and who are doomed to suffer through man’s worst time of history.

If you haven’t accepted that gift, here is how to do so before it is too late.

The Myth of the Pagan Origins of Christmas