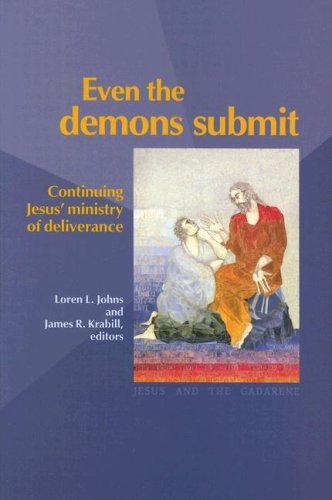 The seventy returned with joy, saying,

Lord, in your name even the demons submit to us!
He said to them,

I watched Satan fall from heaven like a flash of lightning.
See, I have given you authority to tread on snakes and scorpions, and over all the power of the enemy; and nothing will hurt you.

Nevertheless, do not rejoice at this, that the spirits submit to you, but rejoice that your names are written in heaven. ~Luke 10:17-20

Before we begin reading the Bible, we bind the spirits, Bob Ekblad told us. It was a most unlikely setting for an exorcism. I was sitting in a posh hotel meeting room in Philadelphia sur-

rounded by professors and graduate students at the annual meeting of the Society of Biblical Literature. I had been drawn to this work-

shop by the author of 1 because I had read a powerful article he had written about teaching the Bible in a prison in Washington State.2 I had expected to hear him talk about doing Bible study. Instead, he told us we would be reading the Bible together. He would do with us a study that he had done earlier that week with the prisoners. He would use with us the same teaching strategies that he used with the inmates of Skagit County jail. So, before we started, we would ask Jesus to bind the spirits. We needed to name them, and then we would pray.

This roomful of proper academics began tentatively, a little ner-vously. But with Ekblads gentle direction, we were soon moving into authentic naming of the demons dogging us in this particular settingspirits of competition, envy, insecurity, pride, doubt. Then in a simple, almost matter-of-fact prayer of deliverance, our teacher asked Jesus to bind those spirits and to free our minds and hearts for this reading of the text. What followed was remarkable, remarkable in any setting, but near miraculous in the somewhat sterile atmosphere of a major academic convention. It was holy ground. In those simple exercises of listening hard to the word of God in scripture and in one another, healing happened. We became what we in fact were but had been keeping hidden: weary and needy pilgrims taking refreshment at this unlikely way station. There was grace.

For me, Bob Ekblads simple act of asking Jesus to bind the spirits resonated strongly with the conference several years earlier that generated the essays in this volume. At that conference, as in the Philadelphia hotel, people with widely divergent ways of thinking gathered to learn how God is at work resisting evil. The Institute of Mennonite Studies consultation, Hard Cases: Confronting the Spirit World, held at Associated Mennonite Biblical Seminary in April 2004, brought together pastors, scholars, people engaged in deliverance ministries, and not a few people who had experienced deliverance. There were two powerful impulses behind that conference. One was the integrity and charism of Dean Hochstetler, a pastor ordained for deliverance ministry by Indiana-Michigan Mennonite Conference, and the clear testimonies of the many people he has helped find their way back to God. The other was a profound sense of need on the part of some area pastors of congregations providing care for families overwhelmed by chaotic and demonic factors. These are the pastors and these are the congregations dealingwith great courage, deep compassion, and too few resourceswith what Duane Beck describes as hard cases, situations in which a variety of illnesses, addictions, sins, and poverties ravage people at an accelerating pace over several generations. The goal of the conference was to provide a setting for conversation about what deliverance ministries have to contribute to these congregational situations and, just as important, what con-gregations have to contribute to the ministry of deliverance.

The night we heard Gwens story3 was the moment when I finally understood, heart and head, that exorcism in the context of congre-gational compassion and accountability is one way God overcomes evil. One refrain in the story that Gwen told, with her pastor, Duane Beck, was Nothing worked; everything helped. The healing that was in process in Gwens life and in her family had many facets. Help had come from many directionsthe childrens schools, the local police force, social workers, the church, her pastors, and Dean Hochstetler. In that mix, there had been no single answer. There had been no easy answer. Healing continued to be a process, and much was still chaotic in her household. But in that mix, and in that still-messy process of coming back to God, Deans ministry and the congregational support and follow-up to that ministry had played a vital role. Confronting the spirits and binding them marked a significant turning point.

3. See chapter 9 in this volume and Duane Becks reflections in chapter 10.

Her teenagers, she told us, still said every night a prayer that Dean taught them.

As with all conferences, many words were spoken in the course of several days. But when Gwen and Duane finished speaking, words failed us. There was a silence and then, as one, the attending body rose in ovation. Smiles and tears and clapping hands said Thanks be to God, in ways that we could not then put into words. We finished the evening by walking in silence to the chapel to sing the hymns of our tradition that speak explicitly about the demonic. Singing, we were reminded that if evil gathers force over the generations, so also does the power of God to resist that evil. We are not alone in the fight. Others have gone before, and others will come after us. We are the temporary stewards of these ministries.

The diversity of the book is an attempt to honor the complexity of the issue. If you are looking for a simple how-to manual, this book is not for you. If you are looking for a single, easy answer, this book is not for you. But if you want to participate in conversation about the hard and holy work of partnering with God in the battle against evil, you will find much to ponder in this book. If you want to reflect on and care for the people around you who are struggling with hard cases, this book is for you. It is our hope that the varied voices rep-resented in these pages will contribute to the churchs discernment and faithful practice in this arena.

The editors and publishers extend our thanks to Dean Hochstetler, without whom the Hard Cases consultation and this book would never have happened. We also thank Harold Bauman and Duane Beck, who served with the Institute of Mennonite Studies staff and the editors to plan the consultation. And we thank all the presenters and writers who contributed to this volume, as well as Nelson Kraybill and Associ-ated Mennonite Biblical Seminary, who have generously supported this project and the ongoing work of the IMS.

Much gratitude also goes to Barbara Nelson Gingerich, who man-aged the book project and edited it with her customary wise counsel and attention to detail. We are grateful, too, to Willard Swartley for his extraordinary effort in compiling a most useful bibliography, to Mary Klassen, whose sensitivity to good design is reflected in the appearance of the book, to Karen Ritchie for her fine copy-editing services, and to James Nelson Gingerich, who contributed late night and early morning hours to format its pages.

Teens opened fire outside Monroe Church of God #ourCOG IMPORTANT STATEMENT FROM PASTOR SMITH: We had an unfortunate incident at our open gym ministry…