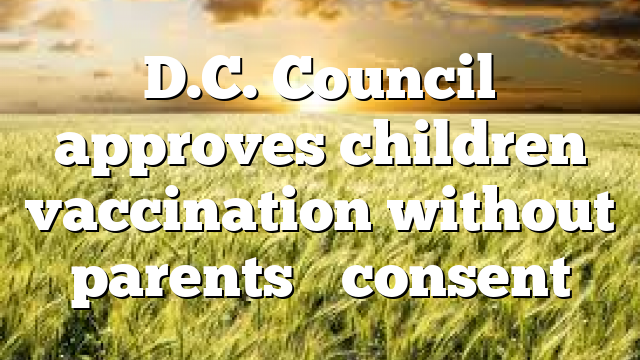 A bill passed by the D.C. Council on Tuesday would allow children as young as age 11 to obtain vaccinations without their parents’ consent.

Under the legislation, if a doctor determines that a minor is capable of informed consent, they would be able to seek government-recommended vaccinations their parents object to on religious grounds. They also could get vaccinated against the human papillomavirus — which is recommended for older children but opposed by some parents because the virus is sexually transmitted and they object to their teenagers having sex.

The bill,which was approved 12 to 1, requires that the doctor send the vaccination record in such cases to the child’s school, rather than to the parents, and seek compensation directly from the insurance company without involving the parents.

THE BILL WAS PROPOSED AS EARLY AS 2019

“Parents have a fundamental right to direct the upbringing, education and care of their children,” White said, before claiming that vaccines, which are generally safe, are a risk to children’s health. White cited the National Vaccine Injury Compensation Program, which has been used by conspiracy theorists to argue that vaccines are dangerous.
PENTECOSTAL UNDERSTANDING OF GOV. RECOMMENDED VACCINES

FacebookTwitterSubscribe
Subscribe to receive all news to your email or phone: [wysija_form id="1"]
approveschildrenconsentcouncild.c.)parentstheologyvaccinationwithout

WHERE do believers go when they DIE?