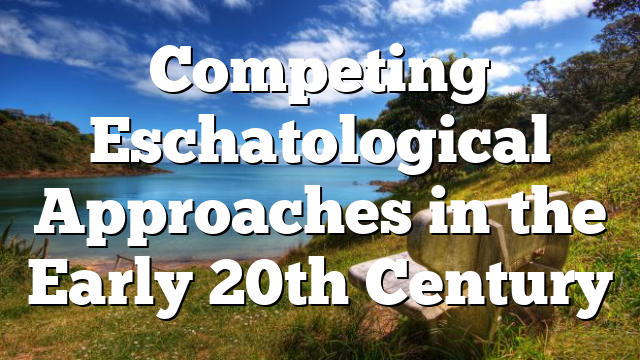 In order to determine whether the early Pentecostals were dispensational in their eschatology, I will outline the major eschatological views extant in the early 20th century. This  exploration  will  provide  historical  context  for  evaluating  the  eschatological  and hermeneutical views of the early Pentecostals in the light of ‘family resemblances’. I will illustrate the various views from the writings of proponents of the late 19th and early 20th centuries. The different approaches will be ordered according to the approximate date of their appearance on the theological scene.

Various approaches to doctrinal issues existed at the beginning of the 20th century. Some individuals were traditionalist in their approach, whereas others innovated in their eschatology.    Michael    S.    Hamilton,    discussing    the    difficulties    of    understanding fundamentalism, identifies the network established in the late 19th century in the United

Some Lutheran theologians of the early 20th century rejected a literal millennium of  one  thousand  years,  finding  instead  a  unity  in  the  events  of  the  last  times.  Henry Jacobs, a Lutheran professor, wrote in 1905 that ‘Christ’s coming and His rewards to the godly and His condemnation of the godless are always closely connected in the Scriptural accounts  of  the  Judgment.’  He  rejected  the  use  of  Revelation  20:1–6  as  proof  of  a dispensational  interpretation  because  the  book  was  ‘figurative’  in  nature,  whilst  other scriptural witnesses to the end times speak in ‘plain language’.58 Relying on the testimony of Matthew 25:31, 32, the Apostles’ Creed, the Nicene Creed, the Athanasian Creed and the Augsburg  Confession,  Jacobs  concluded  that  the  judgement  will  occur  immediately following the Second Coming.59

Jacobs answers the question, ‘Will there be a two–fold coming or manifestation of Christ?’ by quoting the Augsburg Confession,  Art. 17, which condemns ‘others also who now  scatter  Jewish  opinions  that,  before  the  resurrection  of  the  dead,  the  godly  shall occupy  the  kingdom  of  the  world,  the  wicked  being  everywhere  suppressed.’  He  states that  this  statement  ‘clearly  disclaims  all  responsibility  for  any  teaching  that  separates

This was not the only Lutheran understanding of eschatology. Joseph Seiss (1823– 1904)  provides  an  example  of  a  Lutheran  form  of  dispensationalism.  He  held  that  the Augsburg Confession could be read as condemning Anabaptist views of the millennium and  other  abuses,  without  negating  the  possibility  of  a  literal  thousand–year  reign  of Christ after the resurrection.61 Speaking of the timing of future events, Seiss states that ‘as the  great  tribulation  occurs  only  in  connection  with  these  seals,  trumpets  and  vials [in Revelation], the translation by which these honored saints are brought to their rewards necessarily  precedes  that  tribulation  in  point  of  time.’62 In  unique  fashion,  Seiss  taught three  raptures:  ‘Here,  then,  are  at least three distinct  classes of saints,  and each  has its translation and reward at a different time from the other, the rank, privileges and honors being diminished as the succession moves.’63 Following the raptures and tribulation, Seiss taught  a  premillennial  coming  of  Christ:  ‘It  is  Christ’s  coming  that  is  to  make  the millennium, and not the millennium which is to prepare the world for Christ’s coming.’64

Seiss’s dispensational views flowed out of an interest in literal interpretation of prophecy. Seiss quotes a saying that encapsulates his approach: ‘Distinguish the  times, and the Scriptures will harmonize.’ This principle leads to a rejection of ‘mystical and figurative treatment of the Sacred Word, which has so emasculated and obscured it’ and allows one to ‘easily see how every jot and tittle may be, as it will be, literally and completely fulfilled.’ 65 Although holding unique views on certain points, Seiss appropriated dispensationalism within a Lutheran framework.

Churches of the Reformed tradition at the beginning of the 20th century held to covenant theology. Reformed theologians may speak of dispensations, but these are unified under the eternal Covenant of Grace. A. A. Hodge is representative, when he states that

in the several dispensations, or modes of administration of the eternal Covenant of Grace, Christ has contracted various special covenants with his people, as administrative provisions for carrying out the engagements, and for applying to them the benefits of his covenant with the Father.66

Thus, the Reformed see a general continuity in God’s plan for the ages, since his actions are determined under a single covenant. Hodge, speaking of the people of God, finds continuity between the Testaments: ‘The church, under both dispensations, has the same nature and design.’67

In Reformed eschatology, this continuity leads to an eschatology in which all of the events of the end times are unified. In Hodge’s words, ‘Christ’s advent, the general resurrection and judgment, will be simultaneous, and immediately succeeded by the burning of the old, and the revelation of the new earth and heavens.’ 68 In this understanding, a literal millennium of one thousand years is rejected in Revelation 20, as is the idea of ‘two resurrections’ and any return of Israel to their land as a fulfilment of prophecy.69 The traditionalist Reformed of the early 20th century generally held to either postmillennialism or amillennialism. In the former view, the Church would expand and advance, bringing in the kingdom through the preaching of the gospel. According to the latter position, the millennium was a symbolic period in which the Church militant acts. Any thought of a rapture of the Church as a distinct event from the Second Coming of Christ or as a first phase of that return was rejected.

John Fletcher’s (1729–1785) views have particular importance for our discussion on the  relationship  between  Pentecostalism  and  dispensationalism.  This  is  due  to  early Pentecostals’ appropriation  of his views on  the  dispensations and  modern Pentecostals’ retrieval   of   Fletcher’s   ideas   in   their   theologising.   Lawrence   Wood   captures   his eschatological appeal for Pentecostals:

Fletcher often spoke of the coming kingdom of God, its fulfilment on the day of Pentecost, its personal appropriation by faith in the lives of individual believers, and the final arrival of the kingdom when a global Pentecost would engulf the whole world. The essence of the millennium when the whole world would be baptized with the Holy Spirit, was loving God with all the heart, mind, and soul.70

We observe Fletcher’s understanding of both prophecy and the day of Pentecost in his treatment of prophecies that speak of a future spiritual restoration of Israel ‘under the reign of the Messiah’, such as Joel 2:28, Zechariah 12:10, Isaiah 44:3 and Ezequiel 36:25–27. He  states,  ‘That  man  must  be  prejudiced to  an  extreme  degree,  who  perceives not  that these  gracious  prophecies  began  to  receive  their  accomplishment  upon  the  day  of pentecost, when the multitude of them that believed were “of one heart and one soul”’.73

Fletcher appears to refer to a future reign of Christ centred in Jerusalem, but he understands Israel as the Church: ‘In prospect of this glorious time, the prophet calls upon the Church under the ancient name of Zion, Jerusalem, and Israel, to break forth in praise to Jehovah the Redeemer’.74 In equating Israel and the Church, he followed a traditionalist Lutheran understanding of a unified people of God. Fletcher may have popularised the use of three dispensations to divide history, but as J. Russell Frazier comments, ‘Fletcher’s doctrine of dispensations has very little resemblance to the dispensations of modern dispensationalism of the Plymouth Brethren’.75 It is to that dispensationalism that we now turn.

John Nelson Darby, although not the first to promote dispensational ideas,76 is considered the father of modern dispensationalism. Although his writings are vast, a general understanding of his eschatology may be briefly outlined. He used Daniel 9 and the ‘seventy weeks’ as an outline for his historical time line. Speaking of the last week, he states,

But there is still a week left—we have only had sixty-nine weeks—and then there is a lapse. Messiah comes, is rejected, and is cut off, does not get the kingdom at all, gets nothing—He gets the cross, it is true, but that is all He gets. He ascends to heaven, and therefore our hearts must follow Him up to heaven, while He is there.77

Darby, ‘all the direct dealings of God with the world through the Jews are suspended until

77 John Nelson Darby, Seven Lectures on the Second Coming of the Lord: Delivered in Toronto, in 1863

the Church is taken up’79 in the rapture. After the rapture, a tribulation period will begin on earth.80

Darby  distinguished  between  the  resurrection  of  believers  and  the  raising  of unbelievers   because   they   are   ‘entirely   distinct   …   in   nature,   time,   character,   and everything else’,81 being separated by the one thousand years of the millennium.82 During the millennium, the Jewish people will be restored to their land and blessed spiritually in fulfilment  of  the  promises  of  the  New  Covenant.83 In  summary,  the  final  events on  the prophetic calendar for Darby were the rapture, the tribulation, the ‘glorious appearing’ of Christ and the earthly millennium.84

As    mentioned    above,    the    late    19th    century    saw    the    growth    of    an ‘interdenominational evangelicalism’. This movement was influenced eschatologically by a  series  of  prophecy  conferences  held  in  the  19th  century.  To  cite  one  example,  Daniel Steele, an opponent of premillennialism, noted the influence of one of these conferences in 1878. The conference promoted a dispensational reading of history, and the core of the teaching  was  ‘recommended  to  American  Christians  by  certain  popular  evangelists  in their  sermons,  Bible  readings,  and  evangelical  conferences’. 85 This  was  the  type  of conference  that  influenced  people  like  A.  B.  Simpson.  Simpson  published  an  article  in 1891 entitled, ‘How I was Led to Believe in Pre-Millenarianism’,86 and later explained his eschatological  views  in  more  detail  in  his  work  The  Coming  One.87 Whilst  Simpson differed  from  Darbyite  dispensationalism  on  the  issue  of  how  to  interpret  the  book  of

Revelation, opting for a more historicist reading,88 he held to the basic structure of a broader dispensationalism.

Simpson  believed  that  Christ’s  Second  Coming  would  be  premillennial,  and  that Christ  would  establish  ‘a  glorious  terrestrial  millennium’.89 In  his  understanding  the Church and Israel were distinguished,90 and Israel would be restored ‘in two stages, first, national,  and  then  spiritual’  in  accord  with  the  prophecy  of  Ezequiel  37.91 The  Zionist movement was understood as an initial fulfilment of the promise of the return of Israel to their land.92 Before the final events could occur, Simpson believed in a coming apostasy93 and a  great  tribulation,  from which  the Church  would be  removed in the  Parousia  (i.e. Christ’s coming), ‘when His Church shall be withdrawn to meet Him in the air and the holy dead shall be united with them in the first resurrection.’94 He plainly distinguished ‘two aspects of the Lord’s return, the first, at the beginning of the Tribulation, the second at  its  close,  and  at  the  commencement  of  His  Millennial  reign.’95 He  uses  the  term ‘translation’ to refer to a pretribulational rapture:

There will be, doubtless, many spiritual blessings poured out upon the world immediately after the Parousia of our blessed Master, and the translation of His waiting Bride but it will be too late to enter into the joys of the marriage, and escape the sorrows of the great tribulation.96

88 Pyles, ‘Missionary Eschatology of A. B. Simpson’.

Darby’s. Simpson’s views are expounded here as an example of what many pastors, theologians and lay people held within ‘interdenominational evangelicalism’.

This introduction to the major views on eschatology at the beginning of the 20th century provides a basis for evaluating Pentecostal views. If a ‘family resemblance’ approach is taken towards different types of dispensationalists, should early Pentecostals be included in this broader category, or were Pentecostals latecomers to dispensationalism? We will now examine the primary sources in dialogue with these questions.

BLOCK all Satanic and demonic activities!

In the name of Jesus Christ, I forbid and BLOCK all Satanic and demonic activities from transferring to me, any of my family, or…