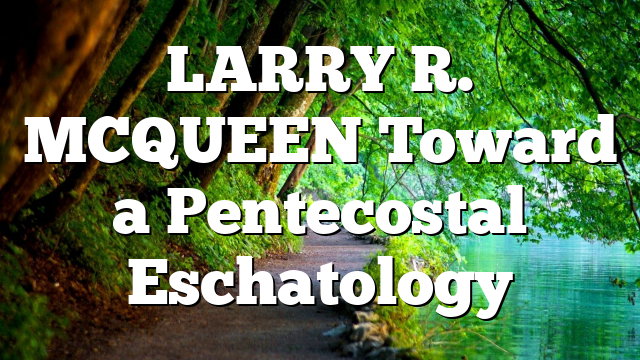 LARRY R. MCQUEEN. McQueen in his work Toward a Pentecostal Eschatology47 provides the most comprehensive study of the eschatology of the early Pentecostals in light of their publications. McQueen examines a great variety of periodicals from both the Wesleyan Holiness stream and the Finished Work stream. Given the overlap between his study and the research questions of this dissertation, I will interact with McQueen on a number of issues.

At this point, I will summarise his views on the relationship between early Pentecostalism and dispensationalism. With respect to the Finished Work stream, McQueen concludes that ‘classical dispensationalism was the only model of eschatology articulated in the early Finished Work stream of the movement.’48 In regard to the Wesleyan Holiness stream, McQueen concludes that ‘no single model or system dominated the articulations of eschatology in this stream.’ In addition, he highlights an approach within the periodicals that incorporates a ‘discerning process’ led by the Spirit’s work within the community.49 In his view, a tendency may be observed within this stream: those positions which emphasise the ‘discerning process’ tend away from classical

48 McQueen, Toward a Pentecostal Eschatology, 293.

49 McQueen, Toward a Pentecostal Eschatology, 141.

dispensationalism, whereas those which focus on ‘reasoned principles of interpretation’

McQueen, in another publication, examines The Apostolic Faith from 1906 to 1908 to  ascertain  ‘how  influential  dispensationalism  was  during  the  earliest  period  of  the movement.’51 McQueen gives three reasons for which he believes that ‘The eschatology of early   Pentecostalism   is   not   a   non-critical   assimilation   of   classical   dispensational categories’. These reasons include the ‘Latter Rain’ concept, in which spiritual gifts were restored. According to McQueen, this idea does not combine well with the dispensational system. He also finds difficulties with the differences in the number of dispensations (e.g. three or seven). Finally, he believes that Pentecostals applied certain passages directly to the Church, which cessationist dispensationalists believed applied only to Israel. 52

McQueen’s   writings   provide   a   nuanced   view   of   the   relationship   of   early Pentecostalism to dispensationalism.  Nonetheless, McQueen orients his thinking in line with   the   contours   suggested   by   Sheppard. 53  With   respect   to   the   ‘latecomer   to dispensationalism’  view,  he  suggests  the  importance  of  investigating  ‘beyond  the  early 1920s  to  discover  the  reasons  why  classical  dispensationalism  finally  became  the  single model  of  eschatology  in  those  groups  in  which  the  discernment  process  was  still ongoing.’54 This comment indicates that for McQueen dispensationalism is directly linked to  a  certain  instantiation  of  the  system.  He  does  not  entertain  the  possibility  that dispensationalism   could   be   a   broader   eschatological   position   within   which   both Pentecostals and cessationists lived and moved and had their being.

50 McQueen, Toward a Pentecostal Eschatology, 142.

53 The section on Sheppard opens the final section of his literature review, providing a framework

for evaluating ‘constructive contributions’. McQueen, Toward a Pentecostal Eschatology, 33–35.

54 McQueen, Toward a Pentecostal Eschatology, 296.

The second research question of this dissertation is whether this portrayal of the history and theology of early Pentecostals conforms to the historical data. Are these points confirmed by an examination of the primary sources of the movement? Does the ‘latecomer to dispensationalism’ perspective faithfully narrate the history of the movement?

The scope of this study must be limited to a manageable set of historical data. I will limit my research especially to the North American, classical Pentecostal context, and following McQueen’s lead, I will focus especially on classical Pentecostal periodicals in the first two decades of the 20th century. Of the many periodicals surveyed by McQueen, I will examine the three that provided the strongest evidence for the ‘latecomer to dispensationalism’ view: The Apostolic Faith, The Bridegroom’s Messenger and The Church of God Evangel. I will also discuss The Christian Evangel, the official periodical of the AOG, due to the importance of this denomination in Sheppard’s argument.

Outline of the Dissertation

In chapter one, I will provide a brief discussion of competing eschatological systems of the early 20th century. This section will allow us to place the Pentecostal approach within the theological context of competing visions. Once the contrasting systems are examined, the ‘family resemblances’ of Pentecostal eschatologies to other systems may be evaluated. In chapter two, I will examine the four periodicals mentioned above in light of the ‘latecomer to dispensationalism’ view. In chapter three, I will bring out some implications from this research in assessing the relationship of early Pentecostalism to dispensationalism. My hypothesis is that if we read the primary sources in light of a ‘broader dispensationalism’, we may see substantial ‘family resemblance’ to other dispensationalists of the early 20th century without negating the differences amongst them. On this reading, the changes seen in Pentecostal eschatology after the first two decades may be understood as adjustments rather than major changes.