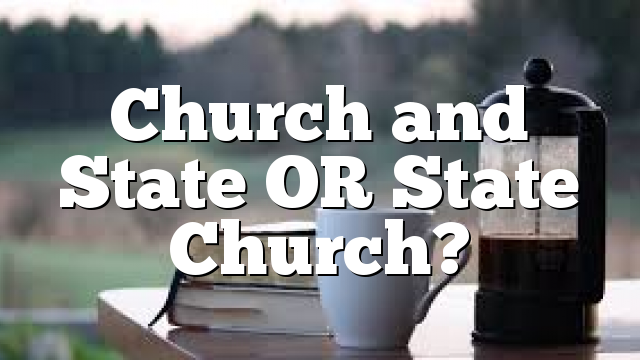 State church is often thought of as something medieval, in history and no longer a part of what we experience. We know that the Roman Catholic church was given political power to add to their already overwhelming religious power, and that united something sinister that we protestants are still fighting against to this day. This state church is what protestantism is protesting against. And yet, the very thought processes that underlie state church are what many protestants have built their entire theology and evangelical view upon. To love the truth we must be willing to part from even these things.

How many people are praying for revival in America, hoping that it will bring about a Christian nation? Where does the idea of a Christian nation come from? Can you find a Scripture that speaks of it? The point that I want to make here is that over and over again God is interested in a City whose builder and Maker is God, a dwelling that is above, and that we are ambassadors of that heavenly City. Any mindset that leads us to thinking that the nation that we are a part of could be that City on earth, which is very Augustinian and Calvinist, or that we can build the Kingdom of God1 on this earth in a physical display, is the very essence of state church.

This cultural Christianity is something based upon ethics, and instituted through fear tactics. In order to consider whether what you are a part of is indeed a state church, or maybe “state church” without the generality, is to ask whether there are rules and regulations outside of the obvious parameters given in Scripture. It isn’t about unity, nor about disallowing any and all kinds of debauchery, but about the ethics that are presupposed on the basis of cultural etiquette. A Christian nation is a nation where the people in it, whether a majority or all, believe in a certain system that teaches a certain morality and idealism, and that those people then are given the right to judge on the basis of their ethics whether other nations, people groups, or cultures are indeed Christian or moral.

Such a statement does not come from the God of the Bible, nor of Israel’s example in the Bible, but rather from the very enemies of God. Those nations that despised Israel, under the wisdom and guidance of the principalities and powers of the air, being wholly given over to the false gods of Baal, Dothan, Molech, etc, were at odds with the very God of creation, who is God of gods, and Lord of lords, and King of kings, simply because they believed this state church mindset of ruling over other nations because our gods are better. Assyria displays it vividly in Isaiah 36-39. Egypt gives the manifest display of the wisdom of the principalities in Exodus, enslaving an entire people whose God is truly God simply because they are great in number and therefore constitute a threat. Who gave the Philistines the right to come against Israel, or Moab to tax Israel, or the Babylonians to strip and burn her with fire? In all these times, the answer is God, but that does not then mean that these other nations were operating under the wisdom of God.

This brings an interesting perception. When a “Christian nation” goes to war, it isn’t that they are warring against someone else because they started it, but because they must battle the evil that is in the world. We pray for the victory, because we fully believe that what we are doing is God’s will and purposes. Yet, in the Bible, there are numerous times where God stops the victory, or stops the prophet from praying. A sure sign that we’re dealing with idolatry is that we don’t hear of people who are stopped, but rather that we must continue to push through until we gain the victory. Yet, what if the LORD’s angel is standing with his sword drawn, and we’re about to send our boys into battle against God Himself? Such a thought is never considered, because we aren’t fighting for the Lord. We’re fighting for our nation, which has now become the substitute for the Lord. Whatever tactics are used for the victory are justified, because it’s better to rid the world of evil, or even this specific kind of evil, than to do nothing or allow evil to continue.

This is the kind of mindset that will allow the Anabaptists to be burned alive, or drown in the lake, simply because they won’t fight in the army. These quiet ones of the earth were not simply nonviolent; they were nonresistant. Such a belief in the words of Jesus that we should love our enemies and pray for them, and that they who strike us on the right cheek should have the left also turned to them, was anathema, even to Martin Luther and John Calvin. The Anabaptists and Libertines were burned alive by the Catholics, and mercy was shown from the Protestants with death by drowning. All of this was simply because they wouldn’t join their movements, and wouldn’t serve in armies, and wanted to live in communities that were focused solely upon living the message of Jesus. And even today there is hostility against those who are outside of the church buildings, claiming that you can’t be Christian and break fellowship, which only goes to show what those ministers and ‘churches’ are gripping onto.

With state church claiming to be “Christian nation”, and you have several different nations at the same times in history all claiming to be, and they even war against one another, you have to ask the question of what it all even means anyway. But it gets even more confusing when you add the detail that the state church believed in a “hidden” church. That is to say, the true people of God, or the “true saints”, or the “true church” is not the general mass that claims to be Christian, but rather the select few who really get it. Thus, we can conclude that “state church” is completely self defeating in every way. Everyone is Christian because everyone holds to these beliefs, but there is a “hidden remnant” that is really the “true church”. That is a contradiction through and through. Yet, it is precisely this that most, if not all, congregations in the West hold to. You have to go to church so as to not break fellowship with the fellow believers, but everyone knows that not everyone who goes to church is truly a believer. How, then, do you decipher whether you’re truly fellowshipping with believers in the church, or whether you’re getting along because you’re all goats and wolves?

David K. Hebert, Master of Arts in Theological and Historical Studies The Rapture of the Church: A Doctrine of the Early Church or a…