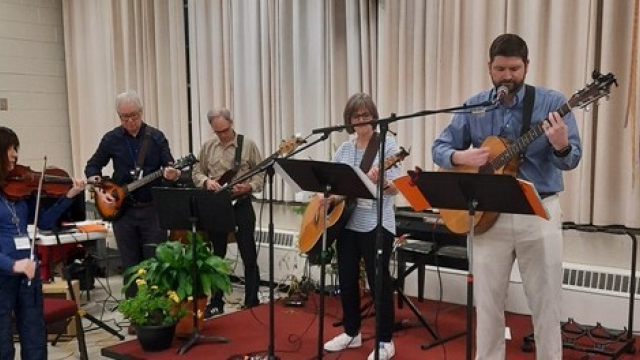 This year’s Charismatic Leaders Fellowship met Monday, February 21st thru Thursday the 24th in Augusta, at the Alleluia Covenant Community. This was our fourth year in a row there.[1] It is a great place to have a meeting as the families of the Community host us for “bed and breakfast,” and the quality of the hospitality is always great. The Conference was mixed live and zoom with roughly 40 on site participants, and about half that number by zoom – most of them out of country. The zoom sessions went off without major problems. (We Christians are getting savvy on this stuff.)

This year’s theme was “Developing Disciples for the Kingdom.” 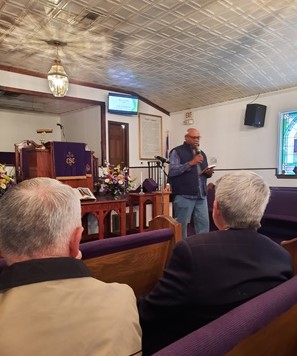 The Conference began with a fellowship dinner at the Community school and then Randy Clark came in on zoom with a presentation on his perspective on discipleship. Principally, he has concluded that all disciples need healing and inner healing prayer, not just theological instruction. Zoom interactions were great, and when I came up to the camera Randy recognized me and spoke with me about a writing project. This was an unexpected blessing for me.

The next morning (Tuesday) began with an ecumenical prayer breakfast at a local African American Pentecostal/Baptist church. The church had hosted a monthly prayer meeting for the major and civic and church leaders of Augusta for several years. The meetings made a major spiritual impact in keeping racial peace and harmony in Augusta during the “troubles” of the summer of 2020. The prayers at the church were lively and Pentecostal, but I have to admit I was disappointed that the civic leaders were not in sight.

Back at Alleluia Community school, we had a zoom session with Fr. John Crossin, a Catholic priest stationed in Austria. He informed us about of the current state of Catholic/Protestant ecumenical dialogue. His presentation was informative but disappointing. His estimate is that it would be a good 15 years or so before there might be inter-communion between Catholics, Lutherans, Anglicans, and other denominations. However, there has been a great deal of progress in theological reconciliation. Fr. Crossin pointed out that even after the church hierarchies agree to inter-communion there is always time spent in educating the lay folks about the agreements and implementing actual inter-communion services. I pray, and invite the readers to pray, that this assessment be mistaken, and intercommunion happen much quicker.

Effective disciples withdraw for a private time of prayer with the Lord, and then return refreshed to the encounters of life and ministry.

After lunch, the conference resumed with a live presentation by the Rev. Richard Roberts of England. Roberts oversees a group of Evangelical churches in England and has had much experience in disciplining leaders. He shared insights in this matter which include urging the disciple to have cycles of withdrawal and encounters. That is, to withdraw for a private time of prayer with the Lord, and then return refreshed to the encounters of life and ministry. Another way of encouraging discipleship is to tell the stories of revival for encouragement. Also necessary are opportunities to further experience God’s presence as in worship and prayer.

After, another zoom session, from England, on the topic of prophecy. This was by Peter Dripple, the head of Teen Challenge in Great Britain. I found his presentation sliding into theological liberalism as he cited, for instance, the Beatle’s music as being prophetic. (Well, maybe, but also destructive to the gospel as in the song “Imagine”). 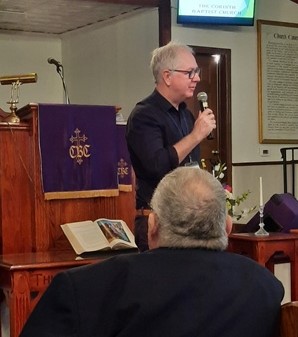 I found the next session, also on prophecy, much more satisfactory. This was given by Pat Sparrow, pastor of a major charismatic church in California. In everyone’s mind was the massive prophetic failures in American Pentecostal/charismatic circles on the 2020 Trump election. He suggested that the prophetic gift in the church be re-set to the more modest goals of 1 Cor 14:3, which do not deal with foretelling (or fortune telling) but rather strengthening and encouraging the church. He also suggested that all prophecy be given in the “soft” mode as in “I Believe the Lord is saying…” as against the authoritative “Thus says the Lord…” This was a much-needed word to the American church. Interestingly, the Rev. Sparrow took some of his discernment understanding from a very early Christian document, the Didache, which had some strong things to say about church order. (I disagreed here, as I believed the document goes too far in restricting prophecy and is anti-Semitic).

In the afternoon (Wednesday) we had a live zoom connection from Ralph Martin, one of the founders of the Catholic Charismatic renewal and major charismatic theologian. His presentation laid out the dire fact of the church in a post-Christian age which is rapidly becoming an anti-Christian age.

In the evening we had a worship and healing service. Bob Armstrong (FGBMFI) and Bob Garrett, the MC of the conference and leader of the Alleluia Covenant Community laid hands on various persons with physical ailment, myself included – I was healed of acid reflux and other were healed of various ailments.

The next morning included worship, evaluation and planning for next year. It will be held again at the Alleluia Community, and one of the topics to be discussed will be how to counter our anti-Christian culture. Hope to see some of you church leaders join us.

An interesting note here. Like Christians all over the world, that morning we prayed for the people of the Ukraine, and for a quick end to the Russian invasion[2]. Person after person led prayers for this. I stepped up to the microphone and explained what a prayer of “command disablement” was according to Acts 13 (Paul temporarily blinding the sorcerer). I then led a prayer, enthusiastically agreed to by the conference participants, which placed a spirit of confusion on the Russian generals leading the invasion.[3]

Have you noticed how inept the Russian invasion has turned out? Of course, the courageous defense put up by the Ukrainians has been a major factor, as well as the poor training and low morale of the Russian soldiers. But I wonder if the prayer of command disablement by a handful of experienced prayer warriors was a major factor in this unexpected incompetence of the Russian military (Lev 26:7-8).

[1] I explained what a covenant community is in my earlier report on the CLF for 2020: William De Arteaga, “Charismatic Leaders Fellowship 2020” Pneuma Review, (March 30, 2020) http://pneumareview.com/charismatic-leaders-fellowship-2020/

[2] Editor’s note: It was on the 24th of February 2022, that Russia launched a large-scale invasion of Ukraine, the last day of the CLF conference.

Pentecostalism vs The Charismatic Movement

Overview Pentecostalism (from Pentecost, the day on which the gift of the Holy Spirit was given to the Apostles) originated from the Wesleyan Holiness…