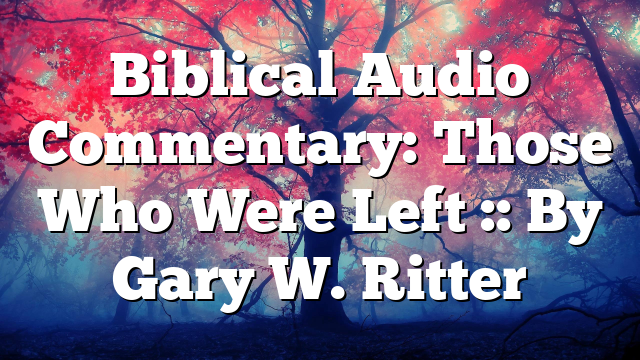 Although it was obviously God-ordained, I’ve always thought the circumstances surrounding the split in Israel after the reign of Solomon, between what became the Northern and Southern Kingdoms, contained a strange contradiction – until I read more closely.

Every indication was that during the time of Solomon, the people of Israel were well-treated and lived in abundance. Confirming this is 1 Kings 9:22:

“But of the people of Israel, Solomon made no slaves. They were the soldiers, they were his officials, his commanders, his captains, his chariot commanders and his horsemen.”

“Happy are your men and happy are these your servants, who stand continually before you and hear your wisdom!”

Yet, for some reason, there was trouble in paradise. We learn of the bottom-line reason in 1 Kings 11:9-13:

“So the Lord became angry with Solomon, because his heart had turned from the Lord God of Israel, who had appeared to him twice, and had commanded him concerning this thing, that he should not go after other gods; but he did not keep what the Lord had commanded. Therefore the Lord said to Solomon, ‘Because you have done this, and have not kept My covenant and My statutes, which I have commanded you, I will surely tear the kingdom away from you and give it to your servant. Nevertheless I will not do it in your days, for the sake of your father David; I will tear it out of the hand of your son. However I will not tear away the whole kingdom; I will give one tribe to your son for the sake of My servant David, and for the sake of Jerusalem which I have chosen.'”

It never fails, as we see throughout all of Biblical history, when God’s people turn from Him, He eventually brings the rebellious to account.

The question becomes, however: If the people of Israel were happy and content, what circumstances could possibly lead to the split of Israel into two kingdoms?

Why is this sad? Clearly, as the text states, these peoples shouldn’t have been there in the first place. If Israel had been obedient to the Lord and destroyed these tribes as God commanded, the situation would have been much different. But, just like the Gibeonites who deceived Joshua and remained in the land as servants to the Israelites (because he didn’t seek the Lord on this issue), none of these groups was wiped out and, over time, were conscripted to work for King Solomon as forced labor in his building projects, as 1 Kings 9:15 notes:

“And this is the account of the forced labor that King Solomon drafted to build the house of the LORD and his own house and the Millo and the wall of Jerusalem and Hazor and Megiddo and Gezer.”

The NKJV provides an interesting contrary description of this same verse using this phrase: “the labor force which King Solomon raised.” I think that the ESV, which I’m first referencing, is correct, given the context.

So, here’s the situation: Solomon begins carrying out the temple and palace-building efforts that his father David had envisioned. He uses the pagans in the land for the bulk of the hard work, while the Jews are given preferential treatment in the work they do. In order to accomplish the tasks at hand, we see the necessary delegation in 1 Kings 11:28:

“The man Jeroboam was a mighty man of valor; and Solomon, seeing that the young man was industrious, made him the officer over all the labor force of the house of Joseph.”

All the pagan tribes engaged in the forced labor had Jeroboam over them. Because of the Lord’s intent to rip Solomon’s kingdom in two after his death, God had the prophet Ahijah anoint Jeroboam as the one who would do that (1 Kings 11:29-33). In fact, God promised Jeroboam that if he was faithful to the Lord, God would build His house through him and his descendants (1 Kings 11:38).

Solomon somehow knew of this anointing and tried unsuccessfully to kill Jeroboam (1 Kings 11:40). All this inspired Jeroboam. Once Solomon died and his son Rehoboam ascended to the throne, Jeroboam put events in motion to achieve the crown promised him by God.

He had the ear of the pagans who were tired of the work to which they’d been assigned. Hearing their complaints, he came before Rehoboam to present their case. Identifying with the pagans, he said in 2 Chronicles 10:4:

“Your father made our yoke heavy; now therefore, lighten the burdensome service of your father and his heavy yoke which he put on us, and we will serve you.”

We know that Rehoboam foolishly rejected the good advice of the elders who had counseled Solomon and listened to his peer group, i.e., the hot-headed young men surrounding him.

That opened the door for the Word of God to come to pass as spoken by the prophet Ahijah over Jeroboam. The kingdom of Israel was rent apart with even the Jews in that part of the land following Jeroboam and the pagan tribes.

Subsequently, Jeroboam turned from God despite His having given him honor and power. The man’s abandonment of the Lord was so great that he commissioned two golden calves to be built as worship idols in order to convince the Jews in his Northern Kingdom not to travel to Jerusalem to the temple of Yahweh. In the succeeding years, resulting from his actions, it was his name that was inevitably associated with some of the greatest apostasy in Israel’s history.

It was his wickedness in this matter of leading the people astray that provoked the Lord immensely. The “sins of Jeroboam” (ref: 1 Kings 14:16, 2 Kings 13:11, and many more) ultimately brought destruction upon the Northern Kingdom, as the people never turned back to Yahweh.

The moral of the story is that leadership matters. Someone may even have a promise from God for His blessings, yet because of the lusts of the flesh, completely disregard what the Lord has said in order to fulfill his own need for power or money. Because of Jeroboam’s interactions with the pagan tribes, i.e., the Amorites, the Hittites, the Perizzites, the Hivites, and the Jebusites, they had likely corrupted him long before he came into his anointed authority.

He yoked himself to those who had no reverence for God and became like them. The world drew him into its sphere, and he became no different than the world.

Isn’t this what we see among many church leaders today? They want to please those outside the church, they ignore God’s Word and believe what the world says, and inevitably they spurn God by disputing the inerrancy of the Bible by embracing the social causes promoted by government and media, and often by falling into sexual sin.

If so much of the church is compromised by its leaders, is it any wonder there are so few remaining people of God yearning for Him and His soon return? If you have rejected God, why would you want Him to come in judgment? Wouldn’t you want to dig deeper into this world, to try to mold it to suit your needs and desires, and to keep it going as it is as long as possible?

That’s what happened in ancient Israel and which led to the nation’s utter destruction. We have Bible history to see God’s actions as a template for how He operates. It’s why we can say with certainty that, given all the wickedness and the converging prophetic signs, devastation is almost at hand.

How long will God extend His mercy by refraining from exercising deserved judgment upon the world? We can’t know, but the Lord has given many of us a sense of how desperate the times are. We also see that the remnant is comprised of few believers – weary believers, I might add.

Surely those who follow Christ have become fatigued in past years, but has there ever been such a universal awareness of that among those waiting for God to act? I don’t know – but I have my doubts.

God, indeed, will act in justice and righteousness according to His timing. Let us cling to what is good, and He will come sooner than we can even imagine.

Please click here to hear the audio version of this commentary: https://rumble.com/v1p1oq5-biblical-audio-commentary-those-who-were-left.html

The post Biblical Audio Commentary: Those Who Were Left :: By Gary W. Ritter appeared first on Rapture Ready.