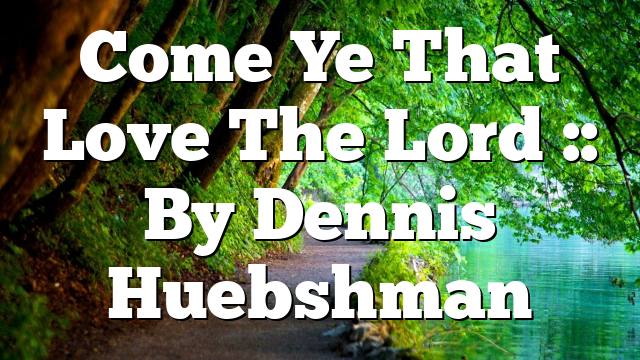 John 20:28-29; “Thomas answered Him; ‘My Lord and My God!’ Jesus said to him, have you believed because you have seen Me? Blessed are those who have not seen, and yet believed.'”

Just being in a church building every time the doors are open, singing the songs, saying “Amen” at the end of prayers, and listening to a preacher give what you may believe to be biblical words does not mean a person truly has Jesus in their heart. It becomes a ritual but not a true lifestyle. Going just to get ear-tickling messages and heart-thumping music doesn’t save anyone.

Luke 6:46-49; “Why do you call Me, ‘Lord, Lord,’ and not do what I tell you? Everyone who comes to Me and hears My words and does them, I will show you what he is like; he Is like a man building a house, who dug deep and laid the foundation on the rock. And when a flood arose, the stream broke against that house, and could not shake it, because it had been well built. But the one who hears and does not do them is like a man who built a house on the ground without a foundation. When the storm broke against it, immediately it fell, and the ruin of that house was great.”

No matter what we may believe, without a relationship with the Gentle Shepherd, who gave His life so His flock could have an eternal Home with Him, we are lost. A person may say they believe Jesus and God are real, but as James 2:19 says, even Satan and the demons believe. They just don’t accept Him as their God.

Prayer warriors are invaluable. When someone is praying for another, they are asking that the Holy Spirit reach out and touch the heart of the one being prayed for. It does not mean that the Father will force anyone to receive and accept His Son, but He could very well put an image on a person’s mind as to what eternity will be like without Jesus. We all still have the free will to choose eternal life in Heaven or eternal punishment in the Lake of Fire.

Jesus knew what would be happening near the end of this age, and in Matthew 24:10-12, He states, “And then many will fall away and betray one another, and hate one another. And many false prophets will arise and lead many astray. And because lawlessness will be increased, the love of many will grow cold.”

The “easy” way is to go along with the world and accept whatever Satan and his demons are putting out. The “hard” way is to go against the grain: accept Jesus the Christ as our Savior and Redeemer, and turn away from all the deceptions. It has become a “ritual” that when someone finds out we follow Christ, we automatically become a “hater.”

To follow the will of our Savior, we are to love everyone, even those who persecute us. They all have an eternal soul, and our prayer is that they will repent and call out to be saved before they pass from this earth. All who do so will be forgiven and spend eternity with the Gentle Shepherd as a part of His flock. We just don’t have to accept any lifestyles that our Heavenly Father calls abominations.

On the other hand, the unforgivable sin right now is to leave this earth without having received and accepted the gift of Jesus, which He paid dearly for at Calvary. This would include “regular” churchgoers who never really ask Him into their hearts and just take up space in the audience.

All who truly believe that Jesus is the Son of God and that He really died as a human, and is the only pure sacrifice there is for sin, and that God raised Him from the grave three days later to conquer sin and death for all who would call on Him, they will be saved. (Romans 10:9-13) We are all sinners (Romans 3:10; 3:23) and deserve eternal punishment for this (Romans 6:23). However, when we confess to the Lord that we are lost without a loving Savior, ask His forgiveness, and ask Him to come into our hearts, we will be saved.

Next question; will we be sin-free from then on? Simple answer – No. God knows our human weaknesses, and because of our sin nature, He has provided the means to be forgiven when we do slip and sin. He gave us 1 John 1:8-10; “If we say we have no sin, we deceive ourselves, and the truth is not in us. If we confess our sins, He is faithful and just to forgive us our sins, and to cleanse us from all unrighteousness. If we say we have not sinned, we make Him a liar, and His word is not in us.”

The main point is, we make every effort to turn away from habitual sin. When we find that we have sinned, as all of us will do, we confess this to the Father and ask Him to forgive us. He already knows what we have done, but He has promised that He will forgive us, because He understands us better than we ever could.

He also knows that when we leave this earth, either by death or by Rapture, we will be given new mindsets that will not be subject to sin’s temptations ever again. That’s why our old bodies will be purged, and we will have an eternal, immortal body that will not have any of our present issues of aches, pains, and death.

All who refuse to call out to Jesus and be saved will also receive forever immortal bodies, but they will be tormented forever with Satan and his demons (fallen angels) in the Lake of Fire. That’s Revelation 20:11-15. There is no third option, no matter what false prophets may try to tell you.

There is an urgency today that is letting us know the end of this age is very near. For the first time ever, all the end-time signs are here at the same time. The Ezekiel 38 coalition is in place, and the “hook,” as given in verse 4, is being set. All three major countries are just about bankrupt, and it’s obvious that little Israel is sitting there with all that wealth just for the taking.

That which was promised would take place is happening daily. There are many who believe this is just foolishness (1 Corinthians 1:18) and that everything is happening as it has since the very beginning of time (2 Peter 3:4). That is part of the “deluding influence” that the Father will send in the Tribulation. Those who have continuously rebelled and refused to turn to Christ as their Savior will believe Antichrist’s lies and worship him instead (2 Thessalonians 2:11).

As stated above, God will force no one to receive and accept His Son’s free gift that is being offered. However, He will turn no one away who truly calls out for forgiveness and asks Jesus to be their Savior. Before any more time passes, if you haven’t asked the Gentle Shepherd to become a part of His precious flock, today would not be too soon. The event known as the Rapture could take place any second, and that’s just about how long it will take (1 Thessalonians 4:13-17; 1 Corinthians 15:51-53). In the twinkling of an eye is the term Paul uses, and that is very much less than one second.

Your eternal reservation could be made this very minute, and you would be eternally thankful that you did so. To be left behind to face the worst 7 years this world has ever seen would be a misery beyond description. No one has sinned so greatly that they cannot be forgiven, if they will only ask. No special fees; no special works; just turn your heart over to the Savior for an eternity with Him in Paradise.

The post Come Ye That Love The Lord :: By Dennis Huebshman appeared first on Rapture Ready.

NYSE Suspends Trading in All John Kissinger [07/08/2015 1:01 PM]Investors were forced to steer orders away from the New York Stock Exchange as the…