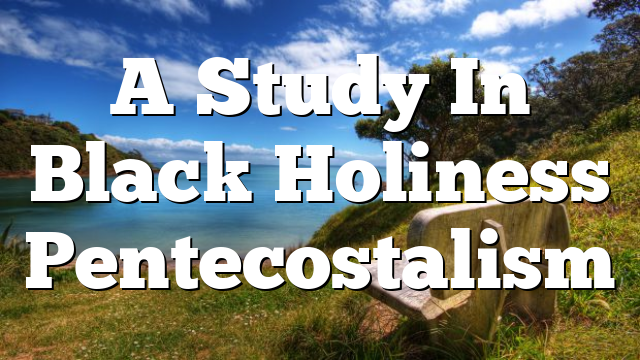 William C. Turner, Jr., Associate Professor for the practice of Homiletics at Duke Uni- versity Divinity School, and pastor of Mount Level Missionary Baptist Church, has made a significant contribution to Black religious studies and to Holiness-Pentecostal history by this cultural-sociological study of the United Holy Church of America. Of central value is the chapter on Holy Convocation which provides historic insight into the ritual transfor- mation from inter-racial Methodist and ecumenical camp meetings and holiness associa- tions to the Holy Convocations common in African American Pentecostalism. Two chapters helpfully situate Black Holiness-Pentecostalism as a Black religion, and another two outline denominational history and review founders within typologies. Turner’s work is an important resource on African diaspora, African American religion, African Ameri- can Pentecostalism, holiness, camp meeting, and pilgrimage — and their intersections. Chapter one identiﬁes 1886 as the year of the initial meeting out of which the United Holy Church of America emerged but emphasizes it roots in black life prior to the Civil War. Turner helpfully reviews the social and theological context of denominational devel- opment: 1) varieties of slaves and freedmen who were craftsmen, entrepreneurs, contrac- tors, miners, dock and railroad; 2) the challenges of Reconstruction and motivations of urban and northern black migrations; and 3) its theological foundations in John Wesley’s “methods” of sanctiﬁcation or growth in perfect love developed by discipline, devotion, service and experience. Turner notes the emergence of holiness (including Weslyans and Free Methodists) which combined black and white experiences and styles in “exercises” that involved bodily manifestations such as dancing, rolling, falling, shaking, or shouting, but he also emphasizes the development of black holiness within the traditions of slave religion and the Black Church: its joyful celebration of the Spirit’s presence and its intense passion for freedom. Within the context of Jim Crow, ongoing forms of disenfranchise- ment, and lynching, black people were not able to exercise freedom in white company, and black holiness was an embodied and theological expression of being set apart from both white Christianity and black church assimilationists. Its holiness was about diﬀer- ence, and its “blackness” about existence shaped by oppression and suﬀering.

Chapter two reviews how the character of the church was centralized in the annual con- vocation and expanded through the multiplication of regional convocations. Tese were ecumenical holiness meetings often held in Methodist churches. After incorporation in 1918 convocations continued to be the administrative, ethical, inspirational, relational, and educational center of the denomination where women and men received ministerial credentials; “irregular marriages” and immoral or non-holy living was disciplined; false teaching was corrected; and courses of ministerial study were developed based on the com- mon life of prayer, Bible study, music, preaching, and shared meals. Further education was also accomplished at the Boydton Institute in cooperation with the Christian Mis- sionary Alliance denomination (in addition to cooperation in local and overseas missions). Te “founding fathers” did not “go into the forefront of political struggles or become race heroes” (54), yet the denomination advanced prophetic social consciousness including supporting the NAACP (National Association for the Advancement of Colored People)

and United Christian College student involvement in civil rights demonstration at the segregated counter of Woolworths in Goldsboro, North Carolina.

Adapting Joachim Wach’s leadership typologies to “Te Fathers,” chapter three describes Henry Lee Fischer as “the man of compassion and wisdom” and the prophet of the Pente- costal Holiness tradition, Johnson Branch as “the holy man,” Jeﬀerson Davis Diggs as “the scholar,” J. W. Houston” as “the interpreter of mysteries” and dispensational theology, E. B. Lyons as “the healer,” and E. B. Nichols as “the missionary.”

Chapter four, “Holy Convocation,” elaborates on the preparations, schedule, bodily activities and ecstasies of these biblically named gatherings. Te ﬁrst day at “four or ﬁve o’clock in the morning” begins with reconsecration and prayer, followed by Bible Church School at 9:00 A.M., then morning worship at 11 A.M., which opened “like a pageant ﬁlled with dignity and grace.” Morning worship involves physical expressions through tears, but often turned toward loud and boisterous “High praise” such as dancing or tongues that could break out at various points of the service: during singing, preaching, or prayer (90-91). Tese events are historically evaluated in relationship not only to African origins, but also in relation to John Wesley’s openness to experiential religion, and are religiously illuminated by Victor Turner’s ritual structure which highlights social liminality and the feeling of community that it creates (communitas). Te chapter’s data is based on 1936 records of denominational “Preceedings,” interviews with two bishops in the 1980s, Year- books, Henry L. Fisher’s History of the United Holy Church of America, and, presumably, the author’s own experience. Tese diverse sources combine decades, but leaves me wishing for a more extensive review of a particular Holy Convocation that describes meeting space, duration (in hours of day and number of days), arrangement of space, housing, attendance, provisions for food, etc. Still, the chapter suggests understanding African American Pente- costalism as an extension of holiness camp meeting rituality which conﬂated African embodied spirituality with Methodist experiential sanctiﬁcation. In this way, Turnerian analysis extends and advances theological discourse by attention to embodied practice. Tis is developed by chapter ﬁve, “Te Blackness of Black Holiness-Pentecostalism” which reviews an African religious or cosmological-ritual background. Afropentecostalism is analyzed as a reformation of both black (and white) Christianity, whose revision is charac- terized in the dynamics of Holiness, spiritual empowerment, and prophetic social con- sciousness. Chapter Six, “Holiness, Pentecostalism, and Black Church Studies,” is a review of central related literature, and methods used.

Professor and Pastor Turner has combined historic and ritual descriptions of the United Holy Church of America, to demonstrate that Black Holiness-Pentecostalism is an exten- sion of African sacred cosmos and ritual practice that reformed Christianity toward public healing in a society that was sick by slavery and segregation. Today the sickness continues in racialized ghettoization and incarceration. By reviewing the Holy empowerment of the past, Turner helps to orient us to places where the Spirit is groaning and active today.