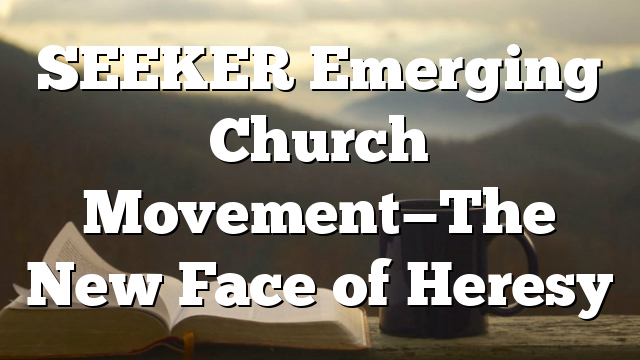 The Emerging Church IS the Laodicean Church – it will birth the Harlot Church of the Tribulation Period.

The thinking of many who profess an identification with some form of “Christianity” has become mushy indeed. Here is a typical comment from a student of the so-called neo-evangelical community.

This statement is senseless. How about more teaching and better living? How can there be correct living without proper teaching?

If we may borrow an expression from Solomon, “there is no new thing under the sun” (Ecclesiastes 1:9); the same old heresies just undergo superficial theological cosmetic surgery—or to use another metaphor, they are recycled. Let us reflect upon several old ideas with new faces.
Universalism

Universalism asserts that there will be the final and complete salvation of all beings. The dogma was taught by some of the early church writers, e.g., Clement and Origen of Alexandria, who lived in the mid-second to mid-third centuries A.D. There is no biblical basis for this dogma (see The Growing Trend Toward Universalism). Yet most folks seem to be inclining to the notion that almost everyone—if not literally everyone—will be saved ultimately.
Postmodernism

The expression “postmodernism” is not found in Van Harvey’s book, A Handbook of Theological Terms, published in 1968. It is a relatively new designation. Postmodernism denies universal truth. Supposedly, truth is how each individual feels about things, not how they really are. Hence, supposedly there is no exclusive, true gospel. The facts of Christianity must be redefined by a new vocabulary in preaching, writing, and worship. This is a wrong-headed ideology.
The Emerging Church

The so-called “emerging church” is the stepchild of postmodernism. This ideology contends it is arrogant to believe that one knows the truth; instead the “truth” is that truth is only determined subjectively, being fashioned by culture, not Scripture. Is this concept even remotely associated with a logical thought process?

It is contended that each person must find his own way to God, and not be addicted to “bibliolatry.” This sounds like the philosophy of those rebels who lived in the dark ages of Israel’s history (Judges 21:25). The “emergist” believes all are arrogant who do not subscribe to his elastic view of truth. He absolutely knows one cannot know absolute truth.

Several of these aberrant ideas have found their way into churches that once were conservative. For example, it is argued by an increasing number that we cannot declare as gospel truth that those are wrong who disagree with our “traditional” teaching. All teaching is now declared to be mere tradition.

What difference does it make whether one believes that baptism is “for [unto, to obtain] the remission of sins,” or whether it is “because of remission of sins.” It is alleged that gospel preachers of bygone years who debated with the sectarians on the design of baptism were misguided. Some are contending that the mode of baptism is irrelevant; sprinkling is as valid as immersion, and those baptized as infants must not be excluded from Christian fellowship. To speak of a “non-immersion baptism” is an oxymoron, because “baptize” by definition signifies “to immerse.”

“Emerging” churches are restructuring the worship format. The Lord’s supper is being offered in conjunction with special events, e.g., weddings. The communion memorial is not restricted to the Lord’s day; instead groups step beyond the biblical pattern and provide it on weekdays, ignoring a New Testament that is undergirded with historical truth, namely the Lord’s resurrection on Sunday.

The music issue is wide open among a growing number of churches. A prominent church in Dallas (that once hosted a respected school of preaching) recently advertised for a “minister of music.” One of the stipulations was that he must be able to play the guitar or the electronic keyboard. Choirs, praise teams, clapping to accompany singing, etc., are becoming standard fare in a number of churches. Performance is rapidly supplementing congregational worship. Biblical authority yields to emotionalism. It is the new “will-worship” (Colossians 2:23).

These are trying times for the body of Christ. But it is not a time for despair. Instead, courageous men and women must keep the ship of Zion on a straight (and strait) course within the boundaries of divine truth. Truth will prevail in spite of the winds of change—and irrelevant statistics.

What is Your New Year’s Resolution?

What Should be Your New Year’s Resolution? #ourCOGJohn Kissinger [01/03/2016 8:14 AM]http://www.christianitytoday.com/women/2016/january/year-without-resolutions.html