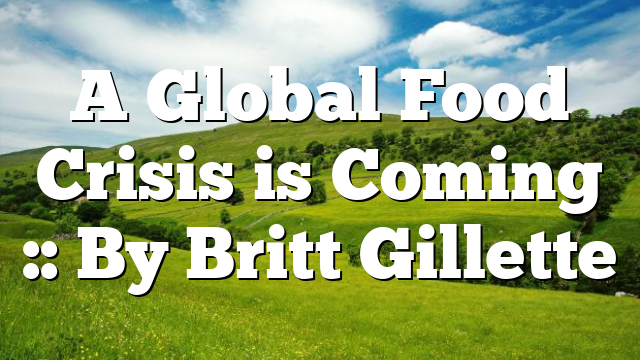 In January and March, I wrote about a coming global famine. Unfortunately, the world has remained on the same trajectory since that time. As we enter the last few months of 2022, the world will awaken to that reality as global harvests come in with lower than expected totals.

Why is this? Entering 2022, rising energy costs had driven up prices for both diesel and fertilizer. Since these are the two most costly inputs in agricultural production, this led to increased food production costs. Those, in turn, impacted the feed cost for cattle, hogs, chickens, and other animals. But now we’re entering the phase where the world will realize shortages and/or higher prices; for fertilizer, herbicides, and pesticides significantly impacted crop yields all over the globe.

What Are the Current Harvest Projections?

On August 12, the U.S. Department of Agriculture released its monthly World Agricultural Supply & Demand Estimates. At first glance, the numbers they cite seem to point to a better than anticipated harvest. However, when you take a look at the numbers and compare them to news coming from the front lines, they appear glowingly optimistic. For example, the USDA projects global rice exports to be the same as in 2021, and they estimate Indian rice production will decrease 0.9%. Yet, according to this TimesNow article:

“There has been a 13 percent decline in paddy sowing so far in the monsoon season in India. Even though the rains have been sufficient, reports say that their distribution in time and space has been inconsistent. This has affected sowing in June and July, the peak months for planting the crop which is fed by monsoon rains and is harvested in October-November.”

And according to Reuters:

“India’s top rice-producing states of Bihar, Jharkhand, West Bengal and Uttar Pradesh have recorded a monsoon rainfall deficit of as much as 45 percent so far this season, data from the state-run weather department shows. That has in part led to a 13 percent drop in rice planting this year, which could result in production falling by 10 million tonnes or around 8 percent from last year, said BV Krishna Rao, president of the All India Rice Exporters Association.”

India accounts for almost 40% of global rice exports, so an 8% decrease in their rice production vs. the USDA’s projected 0.9% decrease dramatically transforms the outlook for the global rice trade. In this video, “WARNING: A Global Food Crisis is Coming ~ GET READY,” I go through the USDA projections for global production, exports, and imports for the most important grains in the world – corn, wheat, and rice. They point to a dire situation. But the official numbers are blind to this because they’re mostly based on outdated surveys that don’t reflect recent weather issues, and they put more emphasis on “area planted” rather than yield expected (which will vary significantly from past years due to fertilizer, herbicide, and pesticide shortages).

Throw in the ongoing war in Ukraine (which feeds a large part of Europe and Africa) as well as a historic drought in Europe, and governments around the world should be working overtime to alleviate the situation. Instead, they’ve been working to make it worse.

Following Russia’s invasion of Ukraine, the U.S. and its allies put sanctions in place to punish Russia. This had serious consequences for the global food market. Why? Russia is the earth’s largest wheat exporter, accounting for 18% of global sales. In addition, Russia is one of the world’s top oil producers. Fossil fuels play a major role in food production. Diesel fuel powers farm equipment. It powers the trucks that bring food to market. And most notably, natural gas is a critical component in the production of fertilizer. As the world’s #1 exporter of fertilizer, the sanctions placed on Russia strained global supply chains and increased the price and availability of fertilizer all over the globe.

On top of the sanctions against Russia, and despite the current fragility of the global food supply, western governments continue to push a climate change agenda that involves significant reduction of fertilizer usage and cutbacks on the number of methane-producing livestock. For example, the Canadian government is pushing for a 30% reduction of nitrogen fertilizer use by the year 2030 – a target farmers say will lead to lower food production and higher food prices. In the Netherlands, the government is pushing for a 50% reduction in nitrogen fertilizer usage. Even though it’s small in land mass, it’s an agricultural powerhouse, supplying the world with billions of dollars worth of agricultural products, materials, and technology. In Ireland, the government is attempting to cull 30% of the cattle in an effort to reduce greenhouse gas emissions. These types of policies will only compound food shortage issues.

At this point, famine is unavoidable. The only questions remaining are how severe the food shortages will be and how high food prices will rise in the places where food is still available. Once the severity of the situation becomes clear, governments will react swiftly.

Food protectionism will sweep the globe as nation after nation bans agricultural exports. Those supplies still available for export will be vacuumed up by the wealthiest nations, who will be willing to pay whatever is necessary to guarantee their food supply. This will leave low income per capita, net importing nations on the outside looking in. Countries such as Somalia, Yemen, South Sudan, Afghanistan, and Haiti will experience severe food crisis and widespread famine and starvation.

What is the End Goal?

In the end, no country will escape the crisis as massive food inflation strikes lower-income citizens in even the wealthiest nations. In the United States, flash mobs will move on from jewelry stores to grocery stores. Food theft will run rampant until grocery stores implement strict security measures. We might even see the rollout of Sri Lanka-style digital rationing cards. Is this the end goal?

It wouldn’t surprise me to find out these government policies are being intentionally implemented to create a food crisis. If they’re starving, most people will gladly trade their freedom and liberty for food.

The Mark of the Beast Platform

While digital rationing cards are not in and of themselves the mark of the beast, they impose a social system identical to the one imposed by the mark of the beast. How? By fencing people into a system where they are completely reliant on the government for their existence. In the past few years, we’ve witnessed the rise of the mark of the beast technology platform. The marriage of corporate and state power has brought us censorship on Big Tech platforms, banking institutions willing to shut the accounts of peaceful protestors, and vaccine mandates and passports.

A global food crisis would be the perfect environment for the world’s would-be rulers to implement a digital food rationing system. Since most people no longer live on farms and don’t know how to grow or raise their own food, they’re vulnerable to becoming slaves to a system they can’t survive outside of. When that happens, the government will have complete and total power. The world is paving the way for the rise of the Antichrist. Fortunately, our hope is in Jesus Christ, and our joy is that He’s coming soon!

Britt Gillette is author of the free ebook Coming to Jesus as well as the books Signs of the Second Coming, Racing Toward Armageddon, and The End Times. Receive his book 7 Signs of the End Times for free when you sign up for his monthly newsletter.

The post A Global Food Crisis is Coming :: By Britt Gillette appeared first on Rapture Ready.

Tropical Storm “Fiona” expected to become a hurricane while moving near Puerto Rico Heavy rains produced by Tropical Storm “Fiona” continue over portions of the Leeward Islands and are spreading across the Virgin Islands. The storm is strengthening and moving toward Puerto Rico and the Dominican Republic. Historically powerful Alaska storm, U.S. Remnants of Typhoon […]