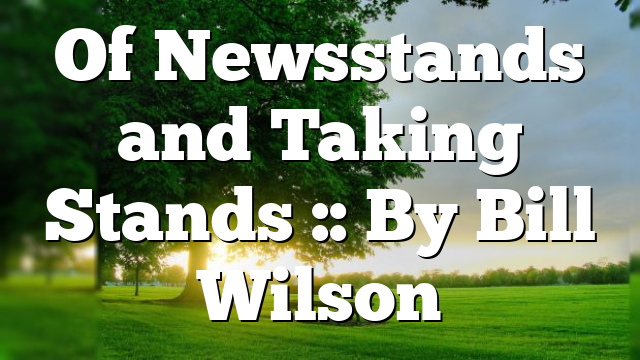 Some of the headlines in the news right now are indicative of just how upside-down the world is. As a matter of fact, it is amazing that the news media would even give some of these people a headline, except the media is about as far from truth and common sense as the earth is from the sun.

Here’s one: Hillary Clinton says that Americans worship guns more than life. This is coming from someone who advocates killing babies in the womb. Howard Stern calls Donald Trump supporters “Morons” who want to live under a dictator. This is coming from a guy who thinks lockdowns and vaccine mandates apparently are not dictatorial. These people judge others from the content of their own hearts.

In Ezekiel 22, the Lord God speaks about a situation in ancient Israel much like what we have in many places around the world, especially in America.

“The people of the land have used oppression, and exercised robbery, and have vexed the poor and needy: yea, they have oppressed the stranger wrongfully.”

He concludes in verse 30,

“And I sought for a man among them, that should make up the hedge, and stand in the gap before me for the land, that I should not destroy it: but I found none.”

Sadly, He found none.

We all like to quote that verse about how the Lord searched for someone who would make up the hedge and stand in the gap before Him for the land, but we rarely quote the last of it, where He found none. Don’t get me wrong. There are many organizations that are standing in the gap, seemingly against overwhelming odds. There are many more people who are asking themselves and others, “What can I do?”

First, seek the Lord. Are there things in your life that are preventing you from seeing what to do? Are you discerning the truth for truth’s sake, or to confirm your own bias? Ask yourself, “what is the mission?” As individuals, we cannot solve all the problems, but the Lord knows you can help solve one of them. Ask the Lord to show you what He wants you to do. Don’t confuse the Lord’s work with political beliefs.

As Christ said about his disciples in John 8:32,

“And you shall know the truth, and the truth shall make you free.”

We can’t defeat lies with lies. Discern the truth. Finally, taking a stand is doing what you can do where you are.

“But you are a chosen generation, a royal priesthood, a holy nation, a peculiar people; that you should show forth the praises of him who has called you out of darkness into his marvelous light.”

“Having your conversation honest among the Gentiles: that, whereas they speak against you as evildoers, they may by your good works, which they shall behold, glorify God in the day of visitation.”

Pray. Know who you are. Put on your armor. Dig in. Make a stand. The Lord will work through you.

Posted in The Daily Jot

The post Of Newsstands and Taking Stands :: By Bill Wilson appeared first on Rapture Ready.

What scripture says Heaven is a planet?

What scripture do you base the idea that Heaven is a planet? (Finis J. Dake) Facebook Comments