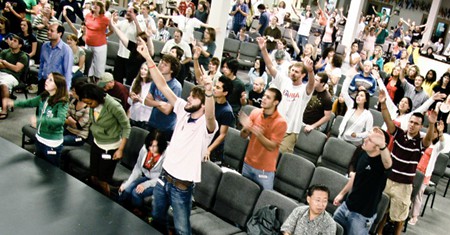 A fresh (and eye witness) look at the “Kansas City Prophets.” I was an eye witness to the mess

John Kissinger [01/10/2016 8:49 AM]
“… The experience of the Corinthian church gives evidence that abuse and misuse can creep into the operation of the gifts of the Spirit if the vessel is not wholly submissive to the guidance and control of the Holy Spirit. That is why Paul said the message of the prophet spoken in the New Testament church should be judged by all who were hearing the message. The judging most likely was to ask how the prophecy conformed to the whole of Scripture…”

John Kissinger [01/11/2016 10:17 AM]
an even fresher 2016 look at Kansas city iHOP reveals that its eschatology has moved toward kingdom-now eschatology. #iHOP and its post-millennial shift toward Dominion kingdom-now theology and NAR’s twist on the traditional charismatic teaching. This video from GOD TVshows Wes Hall–a leader in the International House of Prayer (IHOP) in Kansas City, Missouri–teaching that the reason to pray for Israel is because it is God’s strategy for releasing “breakthrough” to cities and nations (that is, bringing God’s physical kingdom to earth), if#iHOP is part of NAR they sure are Kingdom NOW theology believers
http://www.spiritoferror.org/…/the-nars-obsession…/2915

John Kissinger [01/11/2016 10:28 AM]
I was reading in a forum by former #IHOP members talking about Mike Bickle and International House of Prayer saying: “They are part of the Kingdom Now movement, which basically teaches that either 1) the Book of Revelation has already occurred and the Kingdom of God is currently being perfected by today’s believers or 2) the Book of Revelation is totally symbolic.” http://rr-bb.com/showthread.php?58924-Mike-Bickle-and-International-House-of-Prayer

John Kissinger [01/11/2016 10:35 AM]
So are you saying that Dr. Michael Brown is wrong that Mike Bickle of IHOP and Lou Engle of TheCall are part of NAR ? What exactly is your claim? http://apprising.org/2014/01/14/dr-michael-brown-says-friends-mike-bickle-and-lou-engle-true-men-of-god/

John Kissinger [01/11/2016 11:24 AM]
I am currently interested in the THEOLOGICAL SHIFT Assemblies of God, IHOP and others are making toward NAR. Hence the reasoning polling you as a direct witness. These other witnesses were also there from day 1 and seems like along after you left. Are you saying they are dead wrong on the eschatological shift of IHOP? This is also a direct collective quote from multiple similar sources about IHOP:

“IHOP officially holds to evangelical post tribulation and affirms historical premillennialism. They also hold to the teachings of the New Apostolic Reformation which is part of the Manifested Sons of God theology which came out of the Latter Rain Movement. This theology teaches that it is the Christian’s responsibility to take back society in order that Jesus Christ may return to set up His kingdom here on earth. This is also known as a 7 Mountain mandate or Kingdom now theology.”
http://www.empoweredbychrist.org/international-house-of-prayer.html

Is it your position that telling me all these testimonies from IHOP are wrong?

John Kissinger [01/11/2016 12:16 PM]
We already discussed the eschatology paper they published by IHOP – I recently listened to a series of recorded messages from a conference featuring several prominent teachers associated with the IHOP ministry. The conference discussed Israel, her current status in th world and her place in the prophetic end-time scenario. IHOP from the Kansas city International House of Prayer is one of a growing numbers of Christian associations who teach that the church will be the instrument God uses to bring forth the kingdom of God upon the earth. This teaching fall into the category called the “Kingdom Now” doctrine. – Posted here are testimonies of ex-members who are testifying of IHOP’s move toward kingdom-now theology

Ryan Miller [01/11/2016 1:13 PM]
Tack Mk. 16 on there too. Or are we cutting that put “since it is not in the earliest manuscripts?” If people change, culture changes. It can take JUST one person to change a workplace-positive or negative.

John Kissinger [01/11/2016 1:18 PM]
Peter A Vandever the statement you posted is from May 16, 1993 or 23 years ago. You yourself have said that IHOP eschatology has changed since then. The witnesses sited above agree in the proposed in the joint NAR / Kingdom-now shift. Why dont you agree with their testimonies ?

John Kissinger [01/11/2016 1:28 PM]
If that is really true (which we have multiple eye witnesses saying it’s not), your comment that IHOP belongs to NAR is simply not true. NAR’s foundation, especially since announcing the new apostolic age in 2001, is the Kingdom-now-theology BTW would you give at least one source that the IHOP Kingdom Now position is current? Miller What’s your point?

John Kissinger [01/13/2016 8:13 AM]
NAR is ALL about Kingdom-now – NO way around it! C Peter Wagner denies the rapture of the church. So do Mike Bickle and the IHOPchurch https://www.youtube.com/watch?v=aEqAJpVy8Jw

FacebookTwitterSubscribe
Subscribe to receive all news to your email or phone: [wysija_form id="1"]
cityeyefreshkansaswitness

His Word Brings Stability – No Emotional Roller Coasters – Ray E Horton If we are doing what we know to do, standing against…