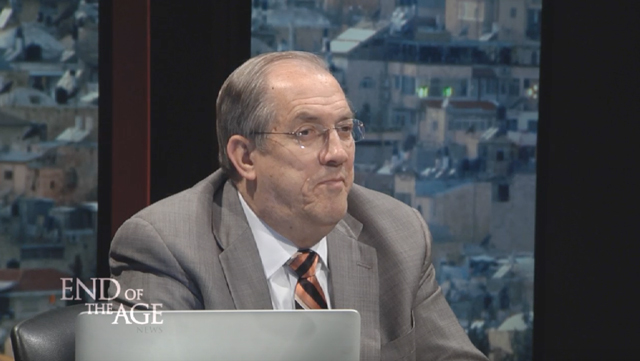 John Conger [01/06/2016 9:57 AM]
I don’t listen to etm anymore but did many years ago. He used to teach that the 3rd trumpet was Chernobyl, the 4th was Saddam burning the oilfields in Kuwait, and the 5th was the apache helicopters in desert storm. (looked like demons to the Iraqis ?). This is a perfect example of someone who tries to force current events into scripture. He used to come to Odessa often to a large upc church there that supported him.

Jim Price [01/06/2016 11:13 AM]
Irvin Baxter seems like a sincere man but he has wrapped himself up in trying to tie together O T prophecies that were never meant to be connected. I expect that in Jan. 2017 we will be hearing all over again how that will be the year of the end time. Meanwhile those of us who grew up in the pentecostal tradition will be distracted from preparing for our own future and we will not be diligent in getting our children and grandchildren to ” occupy til He come” as we should. It only takes getting saved to be prepared for the second coming; it takes generations to establish a families presence in the world.

Tammy Rockwell [01/06/2016 11:51 AM]
Nobody who knows anything about Hollis Gause would insult him or his memory by putting him in the same category as the get get rich off of fear mongering and false prophecy as the guys lauded on this Facebook page, and that includes the dude in the article

FacebookTwitterSubscribe
Subscribe to receive all news to your email or phone: [wysija_form id="1"]
prophetic

Pastor Shane Brown: The Weapons of Our Warfare

Pastor Shane Brown gives a Bible-based teaching about the many weapons of spiritual warfare that have been given to the church. (This is part…