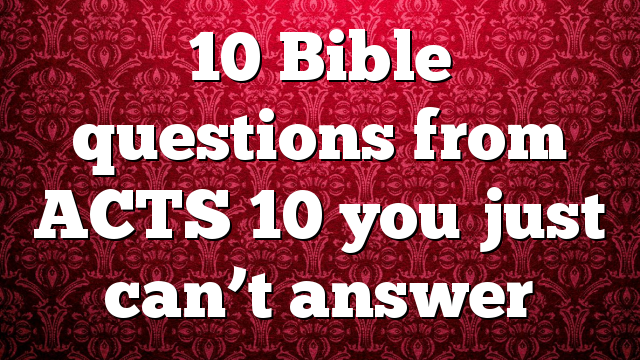 1. Who is Cornelius and what is significant about his vision?
2. What is the context and significance of Peter’s vision?
3. What about that sheet in Peter’s Vision?
4. What are all those animals doing mingling in that sheet?
5. How could Peter’s vision be interpreted?
6. If God intended to make everything acceptable to eat, why did He declare certain foods to be unclean in the first place?
7. Why would God reverse His decision about eating certain foods?
8. Could the phrase God accepts those who do what is right be a way of supporting the doctrine of salvation by works-righteousness
9. Where do we see the power of the Holy Spirit assisting the disciples in completing the work Jesus assigned to them at the end of Luke?
10. How has the Holy Spirit allowed the work of evangelism to be mobile and effective in furthering the gospel?

Discover How Strange Prophecies Can Now Be Fulfilled Numerous cosmic signs have been revealed to us over the past five years. On this DVD,…