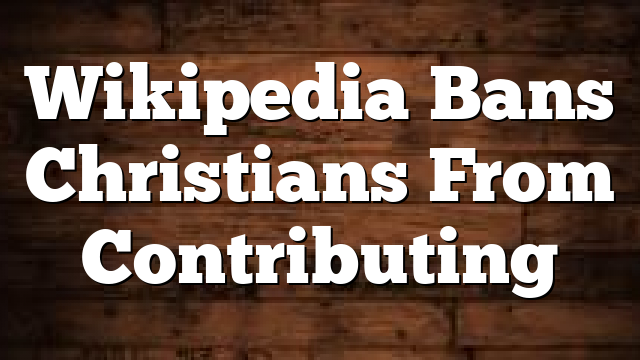 Wikipedia, for years, has been a largely neutral, open platform that was community-supported by editors and contributors who held a wide-ranging variety of viewpoints but collaborated to produce articles that were substantiated and rooted in verifiable facts devoid of bias and opinion.

That is no longer the case. The website has now announced that it will no longer allow Christians who openly-display their faith on their profile pages to contribute to their website. According to Breitbart, a group of leftists went into a tizzy and got their panties all in a wad after it came to light that one of the editors displayed in their userbox profile that “This user believes marriage is between one man and one After a gaggle of leftists whined in a Wikipedia discussion about it, several other user profiles containing conservative, Christian statements and the decision was made by Wikipedia to pull the plug on Christians who openly expressed their beliefs.

Meanwhile, Black Lives Matter and other leftism openly displayed in user profiles is perfectly fine and one user equated stating that marriage is between one man and one woman with saying “black lives don’t matter.”

Conservatism — and particularly, Christianity — is under relentless attack. It is of utmost importance that Christians stand their ground in this culture war. It is a battle that will ultimately be lost by man, but we must remember that Christ has already won the war at the cross. As Christians, even in America, will begin to face ever-increasing persecution, we must remember that Jesus said, “If the world hates you, know that it has hated me before it hated you.” (John 15:18)

FacebookTwitterSubscribe
Subscribe to receive all news to your email or phone: [wysija_form id="1"]
banschristianscontributingfromtheologywikipedia

Will coronavirus introduce the mark of the beast?

Will coronavirus introduce the mark of the beast? That has become a common question in some circles. The idea is that, soon, lockdowns around…