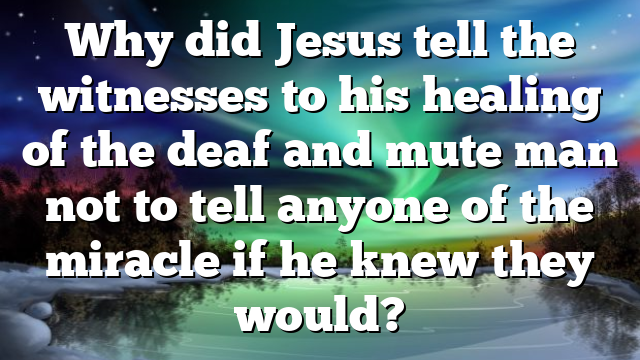 I am at a loss to be able to reconcile the apostle John's description of Jesus in John 2:24-25 with Mark's account of Jesus's healing of the deaf and mute man in 7:31-37, particularly v. 36.

But Jesus would not entrust himself to them because he knew all people. He did not need anyone to testify about man, for he knew what was in man (NASB).

Jesus commanded them not to tell anyone. But the more he did so, the more they kept talking about it (my bolding) (NASB).

Clearly, Jesus was a discerning observer of people. As a man he was more than a little familiar with people's inconsistencies and weaknesses in general and their fickleness in particular. As God, he also had the ability to discern the thoughts and intents of people's hearts (Hebrews 4:12-13).

Assuming Jesus knew human beings in the way he did, why then would he repeatedly tell the people who witnessed his healing of the deaf and mute man not to tell anyone about the miracle? Most certainly, Jesus knew in advance that the more he told the witnesses not to do something, the more they would do it.

I suppose one way of reconciling the two passages is to say that Mark, as a witness to the miracle, was simply making an observation about the link between Jesus's commanding other witnesses to be silent about the miracle, on the one hand, with their unwillingness to do so on the other. In other words, Jesus frequently told his followers what to do, knowing in advance of their unwillingness to obey notwithstanding.

To pose my question crassly, if Jesus knew that the more he told his audience not to do something the more they would do it, why in the first place did he tell them not to do it?

Perhaps a homey illustration might be helpful. Suppose a parent knows in advance that telling a potentially rebellious son or daughter not to do something will simply increase their likelihood of doing it. Such a parent might just issue the warning once, and then simply let the chips fall where they may.

How, then, do we account for the parent's behavior?

HEAR HIS WORD THIS MORNING

Our voices should cry out today: “…In the wilderness PREPARE THE WAY OF THE LORD; make straight in the desert a highway for our…