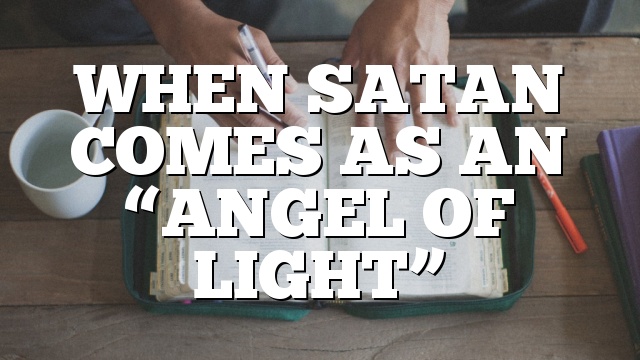 WHEN SATAN COMES AS AN “ANGEL OF LIGHT”

A noise was heard like the sound of a rushing mighty wind, which filled the Temple, and all the congregation simultaneously arose, being moved upon by an invisible power; many began to speak in tongues and prophesy; others saw glorious visions; and I beheld the Temple filled with angels, which fact I declared to the congregation (Hyatt, Angels of Light, 37-38)

Many do not realize it, but the early Mormons experienced speaking in tongues, prophecy, falling under the power, visions, and angelic visitations Yes, this movement, that denies the virgin birth of Jesus and believes there are many gods ruling different plants, emerged out of one of the most powerful revivals in Christian history, the Second Great Awakening.

Their example is a wake-up call for all who embrace the supernatural ministry of the Holy Spirit to be diligent in carrying out the Biblical commands to test the spirits and to judge prophetic utterances and supernatural manifestations. After all, Satan does not come in a red suit with horns and a pitchfork; he comes as an Angel of Light as Paul warned in II Corinthians 11:14.

Mormons and the Second Great Awakening

Peter Cartwright (1785-1872) was a circuit-riding Methodist preacher and one of the most remarkable revivalists of the Second Great Awakening. His autobiography offers intriguing reading and provides valuable information concerning the religious landscape in early and mid-nineteenth century America.

His autobiography also offers a personal glimpse into the origins of Mormonism and how it began in the milieu of religious revivalism. For example, Cartwright tells about a large campmeeting he was conducting with thousands in attendance, including Methodists, Baptists, Presbyterians, Quakers and others. On Saturday morning, he said, “There came some twenty or thirty Mormons to the meeting.”

He tells how at the end of the service, the Mormons remained behind, singing and praising God. They were excellent singers and many began coming back under the tabernacle to hear them. They continued singing and as people finished their noon meal they came back to the tabernacle until there was a large crowd gathered around them.

Eventually one of the Mormon women began to shout and then swooned away and fell into the arms of her husband. Her husband then announced that she was in a trance and that when she came out of it she would speak in an unknown tongue and he would interpret. This was obviously not something new for them (Hyatt, Angels of Light, 33).

Cartwright, by this time, decided to break up their meeting, as he believed they were purposely seeking to draw attention to themselves. As he walked into the midst of the group the woman in the trance began speaking in tongues. When Cartwright told her to “hush,” she opened her eyes, laid her hand on his arm, and said, “Dear friend, I have a message directly from God to you.”

Cartwright, who was a gruff sort of personality, said, “I stopped her short and said, ‘I will have none of your message.’” The woman’s husband, who was to interpret the message in tongues, angrily replied, “Sir this is my wife, and I will defend her at the risk of my life.” Cartwright retorted, “Sir, this is my campmeeting and I will maintain the good order of it at the risk of my life” (Hyatt, Angels of Light, 34).

After an exchange of emotionally charged words, the group finally left. Cartwright identified them as Mormons, followers of a “Joe Smith” with whom he had had several conversations.

Cartwright had several meetings with the founder of Mormonism, Joseph Smith, whom he called “Joe Smith.” Smith shared with him his vision for the restoration of the church of the New Testament. According to Smith, during a time of revival in upper state New York he had prayed about which church was the right one. Smith said that during this time of prayer,

I saw a pillar of light exactly over my head, above the brightness of the sun, which descended gradually until it fell upon me. When the light rested upon me I saw two Personages, whose brightness and glory defy all description, standing above me in the air (Hyatt, Angels of Light, 35).

According to Smith, the Father, Son and Holy Spirit appeared in this vision and told him not to join any of the churches, for none was the true church.

Cartwright said that Smith, at first, sought to flatter him telling him that of all the churches then in existence, the Methodist church was the closest to the church of the New Testament. According to Smith, however, the Methodists had stopped short by not claiming the gift of tongues, of prophecy, and of miracles. He went on to tell Cartwright,

If you will go with me to Nauvoo (a Mormon community), I will show you many living witnesses that will testify that they were, by the saints, cured of blindness, lameness, deafness, dumbness, and all the diseases that human flesh is heir to. And I will show you that we have the gift of tongues, and can speak in unknown languages, and that the saints can drink any deadly poison and it will not hurt them (Hyatt, Angels of Light, 35).

Smith Proves to be Angry and Unteachable

As Cartwright listened to Smith, it soon became obvious that he had left behind Biblical truth and was following sensational teachings based on prophecies, visions, and supposed angelic visitations. As Cartwright began pointing out to Smith his error with Scripture, he said that Smith’s wrath boiled over and “he cursed me in the name of his God.” Smith angrily retorted,

Joseph Smith and his early followers not only claimed the miraculous gifts of the Spirit, they claimed to experience visions and angelic visitations on a regular basis. Those of the contemporary prophetic movement would have, if they had been there, designated Smith as a prophet or seer.

Smith claimed that on one occasion an angel named Moroni appeared to him and told him where to find the plates on which were inscribed the Book of Mormon, written in an ancient Egyptian text. Smith claimed that while he and an associate, Oliver Cowdery, were translating the book, John the Baptist as well as Peter, James, and John appeared to them and ordained them to the priesthood of Melchizedek.

Smith obviously had a very active imagination and a desire to be important. Demons will always play on such human credulity and pride, telling indiviudals how important they will be if they accept the revelation. Cartwright considered Smith and the Mormons a living exmaple of Paul’s warning that Satan transforms himself into an angel of light (II Corinthians 11:13-15).

Out of this group that based its beliefs on prophecies, visions, and angelic visitations, has grown a movement that today numbers millions of followers around the world. While many of their beliefs are obviously Christian in origin, they also hold to many beliefs that have no basis in Scripture and are at odds with Biblical Christianity. This happened because they exalted their spiritual experiences to equality with, and even above, the Bible.

For example, Mormons teach a form of polytheism, claiming that the planets of the universe are ruled by different gods and that Elohim—the God of the Old Testament—is the god of this planet. They also teach that Elohim had a wife who bore his offspring as the Eternal Mother. According to Mormon doctrine, Jesus is merely the oldest of the offspring produced by the Heavenly Father and Heavenly Mother, and we are all his spirit brothers and sisters.

We Must Not Repeat Their Mistakes

Winston Churchill once said, “Those who do not learn from history are doomed to repeat it.” I see emphases in the modern charismatic and prophetic movements that could lead to similar tragic ends if we do not learn from their mistakes. Here are five suggestions that can help us avoid repeating the same mistakes as this movement.

1) Make the Bible the standard by which every spiritual experience is judged. When John Wesley was faced with strange spiritual manifestations in the Methodist revival, he exhorted, “Try all things by the written word and let all bow down before it. You’re in danger of enthusiasm every hour, if you depart ever so little from the Scripture: yea; from that plain, literal meaning of any text, taken with the context.” The Bereans, in Acts 17:11, were commended because, instead of naively accepting what Paul and Silas preached, They searched the Scriptures daily to find out whether those things were so. Because the Mormons neglected the Bible as the final standard of truth, they were led astray by those angels of light Paul referred to in II Corinthians 11:13-15).

2)  Don’t be afraid to “test the spirits.” We will not quench the Holy Spirit by doing what He has commanded us to do. We may quench spiritual pride and religious ambition, but not the Holy Spirit. Smith and the early Mormons did not test the spirits, nor did they judge their prophetic-supernatural experiences. Instead they twisted Scripture to make it fit their experience. Avoid this at all costs.

3)  Avoid spiritual pride. Cartwright says that Smith told him that if he [Cartwright] would join him [Smith], “We could sweep, not only the Methodist church, but all the churches, and you would be looked up to as one of the Lord’s greatest prophets.” Do you see and hear the pride in that statement? Remember that, “the stronghold of deception is pride.” We must stop trying to be important and simply be obedient to the Lord.

4)    Stop chasing the sensational. Let the supernatural happen: Don’t try to make it happen. The early Mormons were obviously enamored with the sensational—visions, angelic visitations, and so on. This led to their departure from Biblical truth. Along with teaching the miraculous dimension of our Christian faith, we must emphasize the practical Christian lifestyle of Scripture. This is clearly articulated in passages such as the Sermon on the Mount. Don’t be afraid of using some sanctified common sense, which the Bible calls wisdom.

5)    Avoid an elitist mindset. Smith claimed that he and his followers were the true restored church of the New Testament and that all other churches were false churches (the Mormons still believe this). This too was based in pride and an unhealthy lust for importance and power.

My prayer is that God will have mercy on us, and bless us, and cause His face to shine upon us, that His ways may be known upon earth and His salvation among all nations (Psalm 67). May God give us a love and hunger for His word, a sharpened sense of discernment, and the courage to speak and walk in His truth.

This article is derived from Dr. Eddie Hyatt’s latest book, Angels of Light, available from Amazon and his website at www.eddiehyatt.com. Eddie is deeply committed to a ministry of writing , teaching and preaching, calling America back to God and her founding principles. He believes there is a purifying process taking place in the American church, which is a necessary prerequisite for genuine Spiritual Awakening.