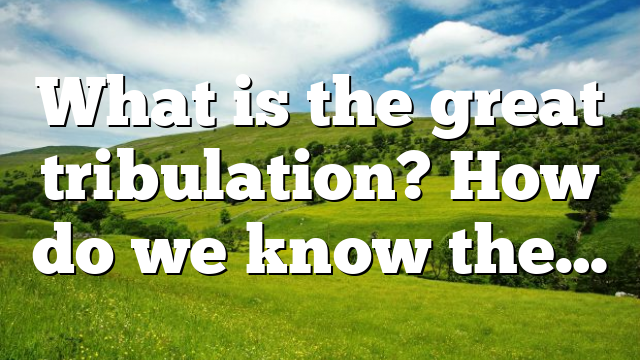 An understanding of Daniel 9:24-27 is necessary in order to understand the purpose and time of the great tribulation. This passage speaks of 70 weeks that have been declared against “your people.” Daniel 9:24 speaks of a period of time that God has given “to finish transgression, to put an end to sin, to atone for wickedness, to bring in everlasting righteousness, to seal up vision and prophecy and to anoint the most holy.” God declares that “seventy sevens” will fulfill all these things. This is 70 sevens of years, or 490 years. (Some translations refer to 70 weeks of years.) This is confirmed by another part of this passage in Daniel. In verses 25 and 26, Daniel is told that from the moment it came out the order to restore and rebuild Jerusalem until the appearance of the Messiah announced by John the Baptist, it will pass seven weeks and 62 weeks (69 in total). After the sixty-two weeks the Messiah shall be cut off (this is the crucifixion of Jesus).

In other words, 69 sevens of years (483 years) the Messiah will be cut off. Biblical historians confirm that 483 years passed from the time of the decree to rebuild Jerusalem to the time when Jesus appeared. Most Christian scholars, regardless of their view of eschatology (future events), have the above understanding of Daniel’s 70 sevens.

With 483 years having passed from the decree to rebuild Jerusalem to the coming of the Messiah, this leaves one seven-year period to be fulfilled in terms of Daniel 9:24: “to finish transgression, to put an end to sin, to atone for wickedness, to bring in everlasting righteousness, to seal up vision and prophecy and to anoint the most holy.”

Daniel 9:27 gives a few highlights of the seven-year period: “And he shall make a strong covenant with many for one week, and for half of the week he shall put an end to sacrifice and offering. And on the wing of abominations shall come one who makes desolate, until the decreed end is poured out on the desolator.” The event of which this verse speaks is that that Jesus calls the “abomination of desolation” (Matthew 24:15). The person who will establish the covenant is called “the beast” in Revelation 13. Daniel 9:27 says that the beast will make a covenant for seven years, but in the middle of this week (3 1/2 years into such period), he will break the covenant, putting a stop to sacrifice. Revelation 13 explains that the beast will place an image of himself in the temple and require the world to worship him. Revelation 13:5 says that this will go on for 42 months, which is 3 1/2 years. Since Daniel 9:27 says that this will happen in the middle of the week, and Revelation 13:5 says that the beast will do this for a period of 42 months, it is easy to see that the total time of the covenant is 84 months or seven years. Also see Daniel 7:25, where the “time, times, and half a time” (time=1 year; times=2 years; half a time=1/2 year; total of 3 1/2 years).

In summary, the great Tribulation is the 3 1/2-year time period in the end times in which humanity’s decadence and depravity will reach its fullness, with God judging accordingly.