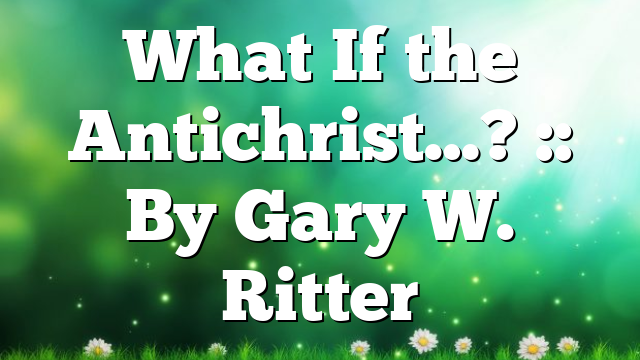 It’s fascinating that most of us who consider such things have inevitably thought of the person of the Antichrist as coming out of the ranks of the elites. Why would we do this? Probably because we figure that anyone rising to such influence must have some base of power to begin with.

Think about some of the candidates that have been put forth for this remarkable end-times position as the man who will rule the earth during the Tribulation. Emmanuel Macron, President of France, is a popular figure whom many point toward as the Man of Sin. After all, didn’t he walk on water, according to the Economist Magazine in 2017 while being labeled “Europe’s Savior?” We have some folks who think Pope Francis could be the man, while others have pointed toward Prince Charles. I postulated back in May that perhaps Bill Gates could be this infamous figure.

We link – and I think rightly so – the man riding the white horse when the 1st Seal is opened with Antichrist, a political figure who will be seen as “the man with a plan,” as Jan Markell has said. The world will be in turmoil, and in some way, this man gains authority with the means of both attracting belief in him plus the adoration of the entire planet. What an amazing rise to prominence!

Yet, perhaps there’s a flaw in our thinking as to who this mesmerizing person might be. Many people are waking up to the engineered harm done by COVID and the so-called vaccines. They know something is wrong, and it starts at the top. They can see that authority figures in government, huge corporations, noted institutions like the WHO, NIH, CDC, and FDA, plus most of the medical establishment – among them hospitals, doctors, and nurses – have lied to the extreme.

These are all official bodies and people in positions of great influence in society. They are among the elites: the globalist rulers and power brokers.

Given this fact and many people’s realization of it, the question that comes to mind for me is: Why would anyone trust a person emerging from this morass of lies and deceit? It’s true that after the Rapture, great deception will come upon the earth; and maybe people will be that stupid to place their lives in the hands of someone with the background credentials of someone like a Macron or Gates.

But… but… what if we’ve got it wrong? What if the Antichrist… comes from “We the People”?

Consider how Antichrist is pictured in Revelation 13:1:

“And I saw a beast rising out of the sea, with ten horns and seven heads, with ten diadems on its horns and blasphemous names on its heads.”

What does it mean that he rises out of the sea? The sea in ancient Israelite thinking represents chaos and even a place of evil.

Biblically, the sea also can represent humanity, i.e., the sea of humanity. And isn’t humanity’s mass of peoples one of chaos and evil given the deceitfulness of man’s heart?

Could the possibility exist that because of the potential fact that most people wouldn’t trust an elite globalist figure to be their leader, given the last couple years of COVID turmoil, that Antichrist comes from what might effectively be called the grassroots?

Think about that. He’s a trusted figure among those who have pushed back against the COVID narrative, and he becomes seen as one who won’t just go along with what everyone is told by the media. He becomes a darling of the “resistance,” and because of his supernatural credentials, impresses even those who might be in opposition. Thus, as I say, perhaps he comes forth from We the People, literally rising out of the (ocean) blue.

What a populist figure he would be! Contrary to all the government and elitist rulers, he might be able to say anything that doesn’t fall in line with their talking points and get away with it. He could be something like a Donald Trump persona only without even the reality show and real estate mogul background that he had.

Of course, the trick is that he would be known and numbered among the highest of the globalist cabal, i.e., a Trojan Horse for the masses. Nothing would separate him from our betters who would rule over us other than the appearance that he isn’t one of them.

Can you see it? How he would emerge from the wilderness of flyover country as the champion of the people? Chaos is the order of the day, and somehow he appears as the savior of the human race.

As I like to say: We’ll see… but we really won’t, that is, those of us who know Jesus Christ as true Lord and Savior. Whatever the scenario, we’ll be snatched away before all this interplay comes to fruition.

I’m ready. This evil, unbelieving, alien world holds no allure for me. It’s ripe for judgment for the abomination it’s become. Surely, God must be close to having had enough. I’m just so glad I don’t have to wait and endure in my own power until Christ comes. It’s His, and His alone.

The post What If the Antichrist…? :: By Gary W. Ritter appeared first on Rapture Ready.

The Divine Human Encounter Towards A Pentecostal Theology Of Experience