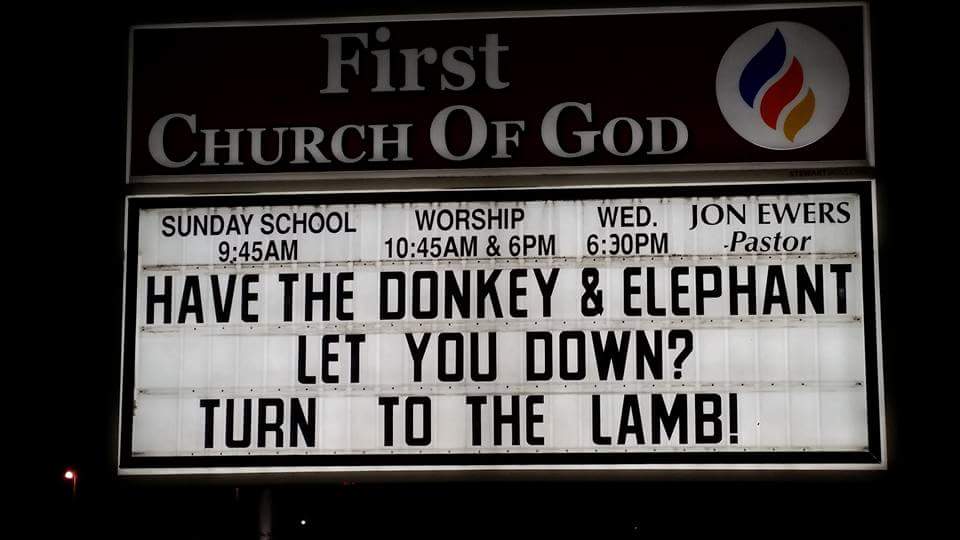 What do you think about all the new names showing up for churches? In this case a Church of God.

Corey Forsyth [02/20/2016 5:20 PM]
I am not big on gimmick names. Sure, come up with a name that indicates your mission as a local church, but too many pastors seem to be better at marketing than pastoring. A local COG has a REAL catchy mission statement but does NOTHING to fulfill it. One part of said statement is “Evangelizing the Sinner” and in my many years as part of this church, not one person ever made claim of salvation other than a few of the regular kids at VBS that tend to get saved every year during VBS…

Jimmy Pearson [02/20/2016 7:12 PM]
I like it. It’s creative. A lot of churches do it so the name of the denomination isn’t included. Most denominations have a reputation or stigma and churches want people to come and give the church a chance rather than judging it based on a preconceived notion about a denomination that may not be true of that individual church. Like I said its creative it catches people’s eye and yes it is easier to market the church around. That said there must be substance as well. Personally I don’t care what methods churches use as long as it doesn’t violate scripture and it works.

Corey Forsyth [02/20/2016 7:15 PM]
So because I am feeling feisty, I will play devil’s advocate… ?
Is it, or could it be perceived as, deceit to refrain from using your denominational title in the church name? Do you run the risk of causing harm by “tricking” people into coming to your church?

Jimmy Pearson [02/20/2016 7:41 PM]
Well if you will be the DA I suppose I’ll be the persecuting attorney. Is it deceit? It could be construed that way I suppose by someone who comes but if they come several times and then have to be told did it really matter if they couldn’t tell a difference anyway. Is the pastor tricking people? Probably not because if the denomination were central to the mission of the church then the pastor probably wouldn’t exclude it from the name. I have a friend who pastors a Pentecostal church in a small town where even people who don’t ever go to church consider themselves Baptist. Putting the name of a Pentecostal denomination on the sign would immediately mean most people in the town would never come just because of the name. He used a name that did not include the denomination. That was several years ago. His church is the fastest growing church in the area. People in the church come from all denominational backgrounds and since then the church actual left the denomination and went independent. Because of his decision. He’s been able to minister to a lot of people he otherwise never would have. No one felt tricked on the contrary when they came in they felt welcomed. The result the church has grown tremendously.

Corey Forsyth [02/20/2016 7:49 PM]
Good answer!:-) I have been a part of 2 churches who left the denomination out of the title and drew a rather large group that would not have otherwise even given them a thought. I am a Baptist pastor coming over from a CoG. I am a firm believer that denominations can be beneficial but should have no true bearing on the base mission of the church. If the church is preaching more denomination than Jesus, they probably need an overhaul…

Jimmy Pearson [02/20/2016 7:56 PM]
Couldn’t agree more. I tend to not be a fan of denominations they can be useful but most times I find they do more harm than good. I grew up in the COG and am licensed with them. But now I consider myself more or less unaffiliated. My allegiance is to God and his word and not a denominational set of rules or teachings. I often tell people my doctrinal background is enough to get me in trouble anywhere I go.

Randy Miller [02/20/2016 10:05 PM]
I was in the church of god when was young people have changed i go to all nations church Pentecostal church

John Ruffle [02/21/2016 1:45 AM]
Well I’ll be at Holy Family Church today, and many churches are nanned after saints. My baptismal church was Holy Trinity.
Invoking the saints and commemorating the godhead has it hands down over pandering to popular opinion.

Robert Borders [02/21/2016 10:00 AM]
You rarely get new visitors because of the name of the church on a sign. People will return due to their experience not due to the church sign.

Jimmy Pearson [02/21/2016 10:14 AM]
a Agreed people return because of their experience but what’s on the sign can prevent them from ever coming in the first place. I do t believe this is a matter of huge importance. Do as you will and do what works in your particular circumstances. The facts are some people and many in the younger generation especially have an aversion to certain denominations or to denominations in general so in some areas and in certain situations a name that does not have a denominational reference may be preferable. As I said earlier do as you will, do what works it’s not a matter of scripture. But grant others the same liberty to do as they will without casting dispersion.

FacebookTwitterSubscribe
Subscribe to receive all news to your email or phone: [wysija_form id="1"]
churchnamessigns