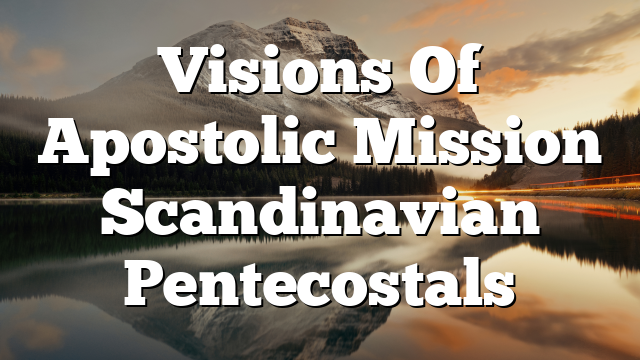 Tis book is the long awaited doctoral dissertation on Scandinavian Pentecostal Mission presented at Uppsala University in March 2009. Since 2002 the author has been the Librar- ian and Associate Professor of History at Fuller Teological Seminary. While studying at the Université Catholique de Louvain, Belgium thirty years ago, Bundy recognized Pente- costalism in Europe to be quite diﬀerent to the Pentecostalism he had encountered in North America. An expert in Pentecostalism and in handling many languages, he has dem- onstrated his interest in the variety of Pentecostalism by a number of reviews of Pentecostal literature in Swedish, Norwegian, Dutch, German, French, Italian, Spanish, Portuguese, and Romanian. During his ﬁrst visit to Scandinavia in 1981 he developed a special aﬃnity for the Nordic expression of the Pentecostal faith. He collected materials, spent many months in libraries and archives, and interviewed key persons, which ultimately led to this dissertation under the supervision of Professor Ruth Franzén.

Swedish Pentecostalism has received a lot of attention by scholars both outside and inside the tradition, for instance E. Briem (1924), G.E. Söderholm (1929), Arthur Sundstedt (1969), and Carl-Erik Sahlberg (1977). Te Missions Institutet-Pentecostal Missionary Union and the Swedish Pentecostal Information Center at Kaggeholm made a joint eﬀort to document the inﬂuence of Swedish Pentecostal mission. Tis project led by Jan-Endy Johannesson and Jan-Ake Alvarson resulted in a number of scholarly publications. As all of the above have been written in Swedish, the topic has not received the international atten- tion it deserves.

Bundy employs the ﬁndings of all of these and adds his own in depth research. By focus- ing on mission practice and theory Bundy builds on Allan Anderson’s, Spreading Fires: Te Missionary Nature of Early Pentecostals (2007), but brings another perspective to it. While Anderson’s work was restricted to the English language materials, by taking the Norwegian, Swedish, and Danish materials into account, Bundy presents a diﬀerent picture. Bundy’s approach is to map the sources and relationships of the early Scandinavian Pen- tecostals, both synchronically and diachronically, for their signiﬁcance to mission practice and theory. Tis required extensive archival research in each Nordic country. It appeared that networks centered on periodical publications were the most important for identifying ideas and inﬂuences. Unlike later Pentecostal periodicals when denominational boundaries restricted the ﬂow of information, the early periodicals frankly write about the discussions and conﬂicts going on for all to read. Where Pentecostal historiography tends to focus on churches rather than on loose networks, Bundy’s method of cultural mapping, recognizing the importance of networks, enabled an analysis that transcends national boundaries and

individual groups. Te mass of information gathered this way made it necessary to limit the period to the ﬁrst decades up to 1935. A further limitation was to remove most of material about Finland, Denmark, and Iceland. Signiﬁcant interviews were undertaken, but these did not help for the period up to 1935 presented in this study. Two personal archives, those of Tomas Ball Barratt and of Lewi Pethrus, were essential to this research.

Barratt and Pethrus are of course the most known ﬁgures for the beginning of Scandina- vian Pentecostalism. Bundy’s research, however, highlights many other inﬂuential leaders that are often ignored, such as Erik Andersen Nordquelle, C.M. Seerhuis, O.L. Björk, John Ongman, and Torvald Plum, like Barratt and Pethrus each editor of a periodical support- ing mission. Barratt came to Pentecostalism after his conﬂict over mission theory and prac- tice with the Mission Board of the U.S.A.’s Methodist Episcopalian Church. Barratt created the ﬁrst European Pentecostal periodical, which served as a model for those that followed. His Byposten, initially started in 1904 to support his innovative mission in Kristiana (Oslo), reported Pentecostal events as of late 1906. After the name changed to Korsets Seir in 1909 it also was published in Swedish, Finnish, Spanish, and Russian. Most important for the early period in Sweden were John Ongman (of the Örebro Mission) and O.L. Björk. Lewi Pethrus only played a minor role in Swedish Pentecostalism up to 1916. Tis changed after he started the publication of Evangelii Härold, which became the dominant mission peri- odical. Just as to other Pentecostals around the world, mission was central to the early Pentecostal churches in Scandinavia.

Bundy argues that the Scandinavian Pentecostal churches adapted their patterns of mis- sion organization and praxis from Holiness, Baptist, and Pietist examples. Pentecostal churches were formed in the cultural space created by the Scandinavian Pietist, Holiness, and Baptist traditions. Tey were also inﬂuenced by their trans-Atlantic connections with North American Holiness Methodists, Free Methodists, and Baptists. Tese movements were reformist and often revivalistic. Pentecostal leaders used these traditions to help deﬁne Pentecostal perspectives and mission theory in Scandinavia. Primary among the models to approach mission was the Methodist missionary William Taylor. Taylor stood against the “Mission Board” approach of mainline American and European churches and advocated a “Pauline” self-supporting mission theory.

Te quick growth led to a process of institutionalization between 1915 and 1922 both in Norway and in Sweden. Establishing Mission Boards for the sake of government recog- nition and eﬃciency provoked reactions and eventually led to conﬂicts and schisms. A visit to the U.S.A. in 1928 alarmed Barratt. He felt the revival had come to an end and was replaced by institutionalization. He went back determined to dismantle the similar national

organization forms in Norway and return the responsibility for mission to the local congre- gation. Barratt and Pethrus joined forces to abolish the forces of institutionalization. Te debate over mission raged in Norway during 1928 and 1930 and in Sweden between 1929 and 1934. At the end of this period the Pentecostal churches led by Barratt and Pethrus refocused on the Apostolic “Pauline Mission” theory and practice of William Taylor.

Bundy is a careful researcher. He obviously knows his material very well and his analysis of the data makes good sense. However I do question his interpretation of the relationship between Barratt and the German and English leaders. According to Bundy the discussion of Barratt’s proposal of an “Alliance” as a structure for cooperation was “blocked by the English and Germans” (233 and 245), which is not my impression when reading the Ger- man and English reports.

In the account of Barratt’s Spirit Baptism Bundy is able to add to our information by using multiple sources, but at one point I wish he would have conversed more with Barratt’s well known account in his When the Fire Fell (1927). In the latter Barratt does have a meet- ing with the Bishop Burt before leaving for New York (compare Barratt, 134 with Bundy, 171), and more important, Barratt changes his theological understanding of Spirit Baptism after his personal experience with speaking in tongues in November 1906. He then refor- mulates his earlier experience of a Spirit Baptism without tongues in October as an “anoint- ing.” In my opinion this should downplay the importance attributed to the treatise Toughts on Pentecost and the Gift of Tongues Barratt wrote nine days before, but Bundy does not seem to have taken this into consideration.

It is understandable that Bundy had to limit his research and stop where he did, but it does leave the reader wondering how the vision of the apostolic mission was carried on. Hopefully the author will ﬁnd occasion to write a second volume toward this end.

Bundy is to be complimented for this impressive research that adds signiﬁcantly to our knowledge of European Pentecostalism and of its mission practice and theory in particular.

What are your thoughts about women preachers?

What are your thoughts about women preachers? Is there proper decorum and place for women? Facebook Comments