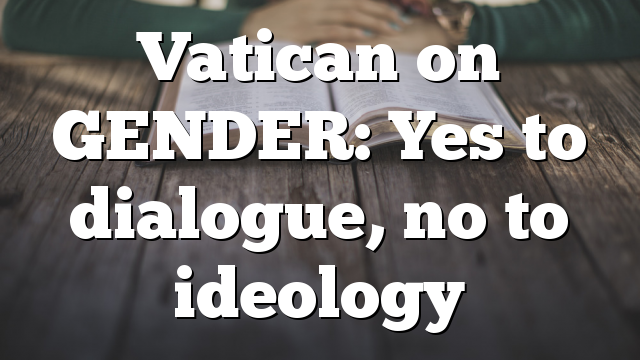 The Congregation for Catholic Education has published “Male and Female He Created Them: Towards a path of dialogue on the question of gender theory in education”. The new document is intended as an instrument to help guide Catholic contributions to the ongoing debate about human sexuality, and to address the challenges that emerge from gender ideology.

The objective of the document — entitled “Male and Female He Created Them: Towards a path of dialogue on the question of gender in education” — is to support those engaged in the education of the younger generations to address “methodically”, in light of the broader horizon of education in love, the issues most debated today on human sexuality.

In particular, it is addressed to Catholic schools and to those who, inspired by a Christian vision, work in other schools; to parents, students, and staff; but also to bishops, priests, and religious, as well as ecclesial movements and associations of the faithful. The Congregation for Catholic Education, which prepared the text, speaks of “an educational crisis”, in particular on the themes of affectivity and sexuality, in the face of “challenges emerging from varying forms of an ideology that is given the general name ‘gender theory’, which ‘denies the difference and reciprocity in nature of a man and a woman’,” and considers them as “merely the product of historical and cultural conditioning.” Identity would then “become the choice of the individual, one which can also change over time “. The text speaks of an anthropological disorientation that characterizes the cultural climate of our time, contributing to “the destabilization of the family.” Quoting Amoris laetitia, the document says that, among other things, this ideology “leads to educational programmes and legislative enactments that promote a personal identity and emotional intimacy radically separated from the biological difference between male and female”. This is the context of the new document, which aims to promote a methodology “based on three guiding principles” of listening, reasoning, and proposing.

Dialogue through listening, reasoning and proposing

In engaging in dialogue on the question of gender in education, the document makes a distinction “between the ideology of gender on the one hand, and the whole field of research on gender that the human sciences have undertaken, on the other”. Citing Pope Francis, it notes that “while the ideologies of gender claim to respond […] ‘to what are at times understandable aspirations’, they also seek ‘to assert themselves as absolute and unquestionable, even dictating how children should be raised’, and thus preclude dialogue”. Nonetheless, research has been carried out which seeks to deepen our understanding of the differences between men and women, and how those are experienced. The document therefore explains that “it is in relation to this type of research than we should be open to listen, to reason and to propose”.

In the brief historical survey of the beginnings of gender theory, the document notes that in the 1990s “it was suggested that one could uphold the theory of a radical separation between gender and sex, with the former having priority over the latter”. It continues, “Such a goal was seen as an important stage in the evolution of humanity, in which ‘a society without sexual differences’ could be envisaged”. Further, “in a growing contraposition between nature and culture, the propositions of gender theory converge in the concept of ‘queer’, which refers to dimensions of sexuality that are extremely fluid, flexible, and as it were, nomadic”. This, the document says, “culminates in the assertion of the complete emancipation of the individual from any a priori given sexual definition, and the disappearance of classifications seen as overly rigid”.

Points of agreement and criticisms

Nonetheless, the document goes on to point out “some positions that could provide points of agreement” within the framework of gender research, which have “the potential to yield growth in mutual understanding”. One area of possible agreement, it suggests, “is the need to educate children and young people to respect every person in their particularity and difference, so that no one should suffer bullying, violence, insults or unjust discrimination based on their specific characteristics (such as special needs, race, religion, sexual tendencies, etc.)”.

As another example, the document points out, “as a further positive development” the “values of feminity” found in contemporary reflections on gender.” In particular, it speaks of the willingness of women to dedicate themselves in a special way to human relationships, especially for the benefit of the weakest. Quoting St John Paul II, the document notes that women “exhibit a kind of affective, cultural and spiritual motherhood which has inestimable value for the development of individuals and the future of society”.

However, the document also highlights some “points of criticism”, noting, for instance, that “gender theory (especially in its most radical forms) speaks of a gradual process of denaturalisation, that is a move away from nature”. In this view, concepts such as “sexual identity” and “family” are based on “a confused concept of freedom in the realm of feelings and wants”.

The document later reflects on the “rational arguments” that clarify the centrality of the body as “an integrating element of personal identity and family relationships”. The human body, it maintains, “is subjectivity that communicates the identity of being.” This helps us understand “why the data of biological and medical science shows that ‘sexual dimorphism’” can be proved by science, as, for example, by the study of chromosomes.

This also recalls the importance of the dialogue between faith and reason.

The third main section of the document offers the proposal that comes from Christian anthropology. “This is the fulcrum on which to support” an integral ecology of man. The document recalls the verse from Genesis, “male and female He created them”. It argues that human nature is to be understood in light of the unity of body and soul, in which the “horizontal dimension” of “interpersonal communion” is integrated with the “vertical dimension” of communion with God.

Turning to education, the document stresses the primary rights and duties of parents with regard to the education of their children — rights and duties which cannot be delegated or usurped by others. It also notes that children have the right to a mother and a father, and that it is within the family that children can learn to recognise the beauty of sexual difference.

Schools, for their part, are called to engage with the family in a subsidiary way, and to dialogue with parents, respecting also the family’s culture. It is necessary, the document says, to rebuild an “alliance” between family, schools, and society, which can “produce educational programmes on affectivity and sexuality that respect each person’s own stage of maturity regarding these areas and at the same time promote respect for the body of the other person.”

The path of dialogue: Transforming concerns and misunderstandings

The document “Male and Female He Created Them” concludes by saying that “the path of dialogue, which involves listening, reasoning and proposing, appears the most effective way towards a positive transformation of concerns and misunderstandings, as well as a resource that in itself can help develop a network of relationships that is both more open and more human”. In contrast, it continues, “although ideologically-driven approaches to the delicate questions around gender proclaim their respect for diversity, they actually run the risk of viewing such differences as static realities and end up leaving them isolated and disconnected from each other.”

The document also emphasizes the “legitimate aspirations of Catholic schools to maintain their own vision of human sexuality”, maintaining that “a democratic state cannot reduce the range of education on offer to a single school of thought”.

Finally, the document notes the importance for Catholic schools of taking “into consideration the age-group of the students to be taught”, and of treating “each person with respect”. This can be done, it says, “through a way of accompanying that is discreet and confidential, capable of reaching out to those who are experiencing complex and painful situations”. Every school, it says, should propose itself as “an environment of trust, calmness, and openness, particularly where there are cases that require time and careful discernment” in order “to provide a patient and understating ear, far removed from any unjust discrimination”.