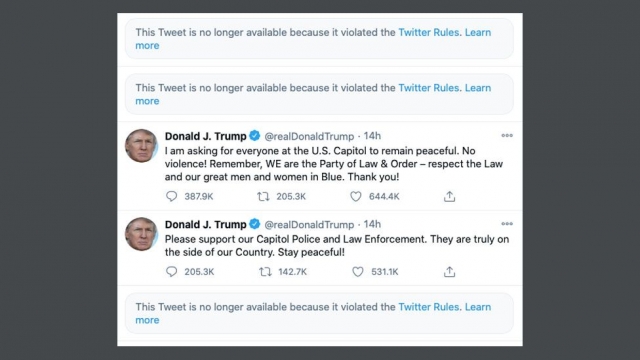 WASHINGTON – President Trump is promising an “orderly transition on January 20th” after a dramatic day on Capitol Hill.

Despite one of the most tumultuous days in the history of the United States Capitol, lawmakers, determined to do their duty, worked into the early morning hours Thursday to count each state’s votes and certify President-elect Joe Biden’s victory.

“If Mike Pence does the right thing, we win the election,” said Trump.

At almost the same time, Pence, who is the president of the Senate, released a statement refusing to do so:

“My oath to support and defend the Constitution constrains me from claiming unilateral authority to determine which electoral votes should be counted and which should not.”

That was followed by a moving speech from Senate Majority Leader Mitch McConnell (R-KY) on why it would be wrong to overturn the electoral results.

“The voters, the courts and the states, they’ve all spoken,” said McConnell on the Senate floor. “They’ve all spoken. If we overrule them. It would damage our republic forever.”

Will a Divided America Led by Donald Trump Lead to a Divided Church?

The 2016 election shined a glaring light on a divided America. According to a November 21, 2016 Gallup poll, a record-high 77% of Americans…