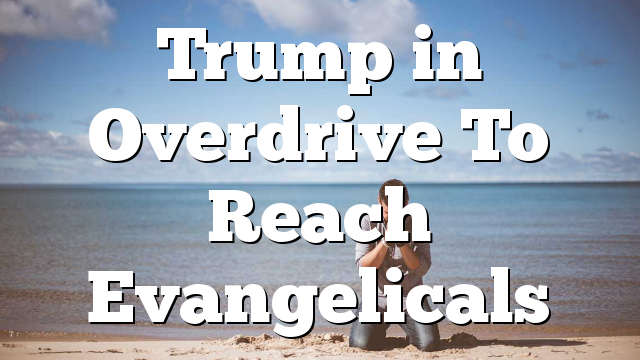 An RNC official added that the RNC is querying members of Congress and leaders of church communities as to how to reach the huge evangelical community. Axios reported that the RNC will feature “signature Trump Victory Leadership Institute (TVLI) training” at faith-based events around the nation.

A Pew Research poll from mid-March found a whopping 69% of evangelical voters thought Trump was doing a good job as president.

In mid-June, Ralph Reed, head of the Faith and Freedom Coalition, said 2020 would see the “most ambitious and far-reaching voter mobilization effort” in the evangelical community’s history, as The Washington Times reported. He stated that plans called for the registration of 1 million evangelical voters, as volunteers knocked on 3 million doors and placed literature in over 117,000 churches in key states. He hoped around 30 million people would be contacted.

As governing.com reported in April, evangelicals have moved even more strongly toward President Trump since 2016:

Burge, noting that the percentage of evangelicals in 45 states rose between 2000 and 2010, posited that the rise came from two sources: Latino evangelicals, whose numbers soared in Arizona, Florida, Maryland and Ohio, and the concomitant move by leftists congregating in big cities such as New York, Philadelphia and Chicago.

In May, White House spokesman Hogan Gidley commented on the closeness evangelicals felt for Trump, saying, “I think there’s a mutual respect. I think they have a good relationship because of the fact that he has delivered on the promises he made during the campaign.”