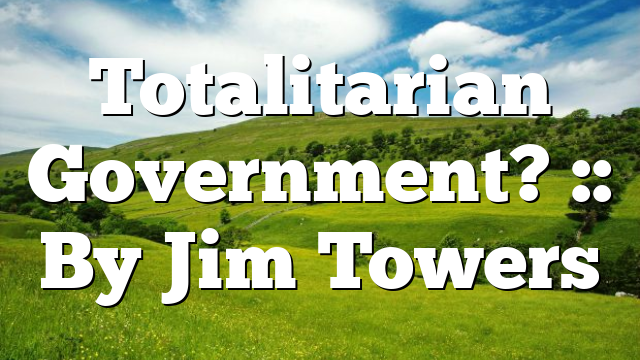 Totalitarian government – one party, despotic, and communist- is how this type of government is described in the dictionary. The party that stole the election is just that. Most of the leaders are Godless – sexual deviants, transvestites, thieves, liars, etc. But that’s what you would expect from those who have been given over to a reprobate mind. They’re following Satan, whether they know it or not.

They are determined to destroy all law-abiding people. Most of all, they seek to destroy Christianity with its “old-fashioned laws.” In doing so, they refer to themselves as progressives. But that title is misleading since sin is as old as mankind itself; so if you are a Christian, a Jew, or a conservative – you are in their crosshairs. Today they are even going after Amish farmers who fail to meet their guidelines on growing food.

Lacking any semblance of common sense, these people demand their own way and are unwilling to listen to reason, so they will not debate an issue or abide by existing laws. They support burning, looting, and getting high as a way of life. But alas, people in their right minds with a degree of morality are becoming fed up with their foolish agenda. Even once complacent Christians are now beginning to smell the coffee. Maybe it has something to do with our fake Federal Government arming the IRS. It seems they can’t get enough blackmail money to give to other rogue governments.

Already they are raiding the oppositions’ homes in the wee hours of the morning armed with poor excuses and machine guns. Thought police will arrest you for expressing your opinion about anything contrary to what they espouse and want you to believe no matter how crazy. Things like men giving birth, redefining a woman, many genders, etc. But then, the Bible warns us in 2nd Timothy that this will happen in the last days.

Christians and other conservatives are becoming aware of the travesty they are facing, yet they remain calm, knowing that the slightest resistance will ignite a firestorm of wrath. If the midterm elections go as they should and the conservatives take over the government, then maybe we can clean house and return to normalcy once again. By normalcy, I mean back to some sort of rational governing.

A note of caution: if you vote in the primaries and the midterms, you must be careful to scrutinize the candidates because anyone can run. In Florida, a man who dared run for the governorship was found in a hotel room passed out and lying naked on the floor in a puddle of vomit. It seems that he was participating in a drug-fueled orgy with another man who thought he was dead. The desk clerk captured a photo of the candidate on his cell phone – disgusting! He was a Democrat. They sure seem to be obsessed with sex and other worldly pleasures.

There are others who pose as Republicans until they get elected, then turn into RINO Democrats, which they were all along. This is a new tactic that the Democrats are using. Consider Liz Chaney, Colorado Sen. Kevin Priola, and other interlopers. It’s beginning to look like these people only want the cushy job of sitting behind a desk and living on the dole while their leaders wage war on us “deplorables.”

Before Sunday’s service, I spied a young man who appeared to be Hispanic, cradling a big Bible under his arm and talking to two other men. One was an older black man, and the other was an older white man. Being the outspoken guy that I am, I said to the young man, “You must be a Baptist. Only Baptists carry their Bibles around like that.” He replied in the affirmative, “Yes, I am,” to which the black man said, “I’m a Pentecostal.” The other man was an usher at the Presbyterian church I’m currently attending. I thought, “how strange.”

The usher then began telling me what he knew about prophecy and mentioned Johnathan Cahn’s latest book. I was taken by surprise at the diversity and subject matter. Who would have thought that one day you could have three men from three denominations talk to one another so openly? That encounter strengthened my belief that there was yet hope for the future of our Christian faith – at least for another little while.

Jonathon Cahn is a name that engenders disbelief in modern-day prophets. I must confess that I have read everything he’s written – but very carefully. The first reason for disbelief is because he always dresses in all black – just like Johnny Cash – which makes it hard to not believe that his attire is just a marketing ploy. And you can answer me this: Why does he always couch his revelations in fictional narratives? Why doesn’t he just spit it all out? Ah, but at least he doesn’t wear torn skintight jeans with a shirt hanging out over their belly like most preachers today.

It’s gotten to the point where we have Bible prognosticators referring to themselves as Prophets or Latter-day Prophets. Some even refer to themselves as Apostles – quite heady stuff. You’re more likely to find these people at the bank rather than on the streets of Calcutta sharing the Gospel of Jesus Christ. But alas, I must confess that I was going to refer to myself as an “Evangelist” and would have been justified according to Webster’s dictionary. However, I thought the term sounded a little too pretentious, and only Billy Graham could fit that title in modern times. Alas, we need many more men to fill the gap he left in these Last Days. Charlatans, money-hungry phonies (both men and women) seeking fame and fortune are mostly what we currently have.

I guess Jonathan Cahn is the best we can do.

P.S. I got an email from Sid Roth wanting to heal my infirmities. I wonder how much money he is charging these days for curing toenail fungus. It seems everybody who emails me wants money – and they already have tons of it!

Keep looking up, “for your redemption draweth nigh.”

You can write me at [email protected] or visit me at my website www.propheticsignsandwonder.com and visit me at www.dropzonedelta.com

For verily I say unto you

For verily I say unto you, That many prophets and righteous men have desired to see those things which ye see, and have not…