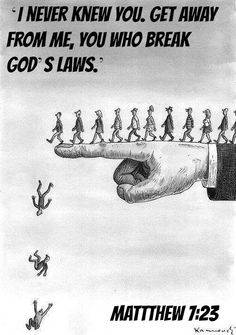 [In Thyatira, “that woman Jezebel” advised Christians to partake in “trade-guild festivals” (which involved idolatry) in order to prevent economic hardships. But Christ warned that this involvement would lead to much greater loss:] “To the angel of the church in Thyatira write: These are the words of the Son of God, whose eyes are like blazing fire and whose feet are like burnished bronze. I know your deeds, your love and faith, your service and perseverance, and that YOU ARE NOW DOING MORE THAN YOU DID AT FIRST.” (Rev. 2:18-19) [There is a reference here to the account of Ahab and Jezebel, as given in 2 Kings 9:1-10:36; and although we do not know who THIS Jezebel was, yet from the reference we may take it for granted she was a woman of power and influence in Thyatira, who corrupted the true religion, and harassed the followers of God in that city, as Jezebel did in Israel.] “Nevertheless, I have this against you: You tolerate that woman Jezebel, who calls herself a prophet. By her teaching she misleads my servants into sexual immorality and the eating of food sacrificed to idols. So I will cast her on a bed of suffering, and I will make those who commit adultery with her suffer intensely, UNLESS THEY REPENT OF HER WAYS.” (Rev. 2:20-22) [The remainder of the message seems to wholly concern the faithful, who have not acknowledged the doctrine of error.] “Now I say to the rest of you in Thyatira, to you who do not hold to her teaching and have not learned Satan’s so-called deep secrets, ‘I will not impose any other burden on you” (Rev. 2:24) [Paul says this to us:] “I keep asking that the God of our Lord Jesus Christ, the glorious Father, may give you the Spirit of wisdom and revelation, SO THAT YOU MAY KNOW HIM BETTER. I pray that the eyes of your heart may be enlightened in order that you MAY KNOW THE HOPE TO WHICH HE HAS CALLED YOU, the riches of his glorious inheritance in his holy people, and HIS INCOMPARABLY GREAT POWER FOR US WHO BELIEVE. That power is the same as the mighty strength he exerted when he raised Christ from the dead and seated him at his right hand in the heavenly realms, FAR ABOVE ALL RULE AND AUTHORITY, POWER AND DOMINION, AND EVERY NAME THAT IS INVOKED, not only in the present age but also in the one to come.” (Eph. 1:17-21)

Be blessed as you praise The Lord, knowing that MAY KNOW THE HOPE TO WHICH HE HAS CALLED US!

I baptize you with[a] water for repentance. But after me comes one who is more powerful than I, whose sandals I am not worthy…