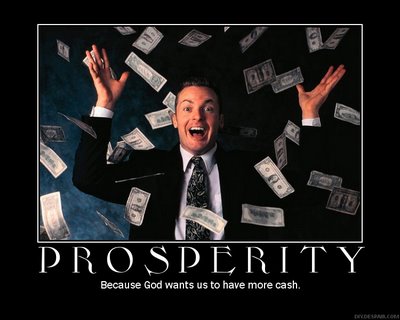 I am vehemently against the health, wealth and prosperity doctrine. But, I don’t understand why people get so mad when a Christian is wealthy. I don’t find anything wrong with God blessing people to be wealthy, of course I don’t believe it is guarenteed just because you are a Christian. Thoughts?

Charles Page [09/15/2015 2:01 PM]
There are a lot of rich people (philanthropist) who distribute their wealth but I don’t know of anyone giving of their goods without any strings attached.

David Cerrone [09/15/2015 6:18 PM]
I too believe you as a christian are perfectly alright if you have money. It is not money itself tha can kill you. It is the love of which will kill you.

John Ruffle [09/16/2015 12:54 AM]
Peyton Gurley. People get mad when the values of this passing world system infect people who claim to ‘know God’; say they ‘believe the Bible’ and tell others ‘you need to get saved’ …. when they have not yet themselves been saved from THIS world’s corrupt system. We are IN the world yet not OF its essence. We are to USE the world, but not as if we make FULL USE of it. A lot of wealthy in this world’s goods christians think they can live a lifestyle with creature comforts that far surpasses all the kings of bygone ages (ok, maybe delete the concubines…) and so long as they give 10%, 20%, maybe even 40% of their wealth away, then they are OK.. The problem is and always has been, (cite the Rich Young Ruler …), that worldly wealth tends to have us ratehr than the other way around. We are SO incluturised to western standards we are not even aware of it. Early 20th c. Pentoicostalism actually showed us the way to go. But what happened I guess happens to EVERY movement.. politics, status, the ambitious ones forcing their way to the top, while some anointed ones get shoved in the corner (esp. if in the States you happened to be ‘black’..) Oh my. In a sentence, then, folks are looking for other worldly REALITY, and the question is, HAVE WE GO IT?

David John Maxfield [09/16/2015 2:29 AM]
I’m not for anyone getting rich by stepping on the heads of others, however if people have a problem with the earthly wealth of people now, then they are going to have a much bigger problem with Jesus and the ritches of his kingdom that is paved with Gold and walls of rubies and sapphires and jemstones, Jacinth etc

John Ruffle [09/16/2015 3:15 AM]
I have a massive problem with the widening gap between the rich and the poor around the world and at home. As Christians we need to setting an example of greed having nothing to grip us with.

Poor people are greedy roo… they want and can’t have. Transformation of Jesus in the heart is needed. How can we teach contentment with what we have? Not by sermons alone but by modelling it with our life styles.

Leadership entitlement has to go! BMW for the pastor and church members getting food from food banks. Don’t think so. That’s dead in the water.

David John Maxfield [09/16/2015 5:39 PM]
No of course not, sorry Jim Kingsnorth I must of misunderstood your comment as I thought you were referring to yourself. I’m am advocate to a promised abundant life so that all around me can be blessed as well 🙂

Jim Kingsnorth [09/16/2015 5:52 PM]
Then we misunderstood each other. Sorry Bro! I just have an issue with the Poverty – Sickness gospel. I believe God wants to bless us and has no problem with us having money as long as money does not have us. I don’t believe in setting up our own kingdom here on earth like some of the prosperity teachers teach.

Charles Page [09/16/2015 5:55 PM]
The prosperity teachers believe God wants to bless us and has no problem with us having money as long as money does not have us.

Jim Kingsnorth [09/16/2015 5:57 PM]
Charles, there are some that teach hyper-prosperity though. I am just not going to name names like some people enjoy doing. God can take care of His church, He does not need me doing it.

David John Maxfield [09/16/2015 5:58 PM]
This is a very interesting take on tithing, I haven’t heard it before and I’m not sure about it, but it may be helpful for the discussion.

FacebookTwitterSubscribe
Subscribe to receive all news to your email or phone: [wysija_form id="1"]
doctrinehealthprosperityvehementlywealth