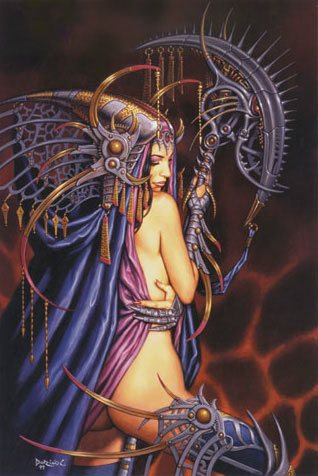 The Jezebel spirit is active in the church today and I see it getting worse. People are using their position, their office in the church and their influence over pastors to manipulate and destroy. People will see a need and quickly offer to help and weak pastors put wrong people in position without praying about it. People with money will use it to get in with the pastor and then their character is revealed. Everything you do in the church or ministry should be with a pure motive. The church of Thyatira was rebuked for allowing Jezebel to teach in the church. Rev. 2:20..

A person never begins by showing the Jezebel Spirit. 90% of the time they come offering to do anything you need done in the church or offer to fill a void. Then they slowly begin their plan. The Jezebel Spirit is manipulative and controlling and ends up as a spirit of rebellion.

When someone is walking with this kind of evil spirit entrenched in them, they will initially move and operate in a spider web mentality. Just like a spider creates a web so it can trap its prey so it can then devour them, the Jezebel spirit will start out in the exact same way once it moves into a certain environment to try and work. These people know how to smooth talk people and use false flattery to gain favor so they can then start to work to get their claws worked into them. And before you know it, you will be caught in their web. And then once they have you caught in their web through false flattery and deceit, they will then start to attack you and try to tear you to pieces. You can read about the actual person Jezebel in 1 Kings 18, also chapter 19 and 21 and 2 Kings 9 and then Revelation 2:20 Notwithstanding I have a few things against thee, because thou sufferest that woman Jezebel, which calleth herself a prophetess, to teach and to seduce my servants to commit fornication, and to eat things sacrificed unto idols.Revelation 2:21 And I gave her space to repent of her fornication; and she repented not.

The spirit of of Jezebel usually operates in many areas in the church: Music/Singing this is where most churches have had to deal with it. A person that is good in this area and knows it uses their talent to get in and in many instances they know they are good. Then they begin to exceed their position. I have had to deal with many people in this position I will give you 2 brief examples. I went to pastor at church that had minimal music and not much singing help I Jennemann come in that was a great piano player and a good singer he offered to help. After a period of 4 weeks ( I should waited longer but needed help) then he tried to take control. In another s woman was a great singer I would ask her to do 2-3 sings she did for a month or so and then started going from one dong to another and by the time I removed her she was going for 30-40 minutes and acted as if she was in charge. After I removed both of those they used the second area: they began to try and get others on their side and went around sowing discord and dissension and in both cases caused a major division. Let me add here, when these people do this the pastor is usually the last to know. If you are approached by someone in this manner you need to immediately let your pastor know what is Happening.

The third thing is these people use their position or their talents to undermine leadership. When someone knows more than the pastor and begins telling you they are smarter than, and more spiritual than the pastor they have a form of a Jezebel spirit.

Also this spirit works great in the money area. Two things about this: these people love positions where they are involved in the money end of church such as clerk, treasurer, counting of and dispersing money. They try and gain control and override the pastor and many feel like the money is theirs. The other area of money is people use their money to try and bribe or buy their way into a position. They will flash their money and possessions in front of a pastor and even give him money for attention and influence. The Jezebel spirit has really become strong in the last few years and it has and is causing much trouble in the church. There is much more I will post more later.

FacebookTwitterSubscribe
Subscribe to receive all news to your email or phone: [wysija_form id="1"]
activechurchJezebelspirittoday