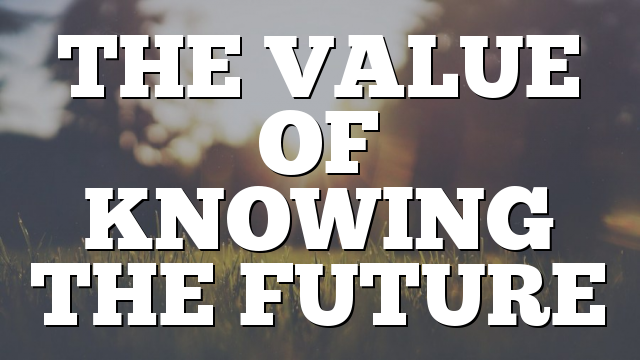 THE VALUE OF KNOWING THE FUTURE

Prophecy is the foretelling of events that will come to pass in the future. The world has had no shortage of individuals who would like folk to think that they were prophets. Like Nostradamus for example who in his day was the prophet to the royal family. Nostradamus was wise enough not to make his predictions popular but somewhat vague. So that when they failed to come to pass he didn’t lose his head to the axeman!

How different this all was to the prophecies made in the Bible by men of God that were inspired by the Holy Spirit to say what they did. For example there was the man of God that declared that a child would be born of the descendants of King David, Josiah by name, who would burn the bones of the idolatrous priests on the altar that Jeroboam had set up (1 kings 13:2)

Notice that this prophecy concerned years into the future, for the child had not yet been born, it was to be a descendant of King David, its name would be Josiah, and when it grew up it would burn the bones of the idolatrous priests. All this came to pass, word for word, as recorded in 2 kings 23:16

Beloved, the prophecies of men of God were accurate to the extreme, how much more so in what Jesus, the Son of God, said…Make no mistake, he declared that the hour upon the world now was the end of time. Yes, we really are living in the end of all time…And we need to be ready to cope with what is already here, and what is coming, by getting on God’s side now…

It all depends what you mean by “predestination.” It does NOT mean that God programmes the minds of some people to fulfil his will. If that was the case then God, with all that was at stake where the redemption of mankind was concerned, would have programmed Jesus to have fulfilled his will. But that was not the case for Jesus himself said, concerning his life, “I lay it down of myself. I have power to lay it down, and I have power to take it again. This commandment have I received of my Father.” (John10:18) Yes, God has created mankind with a Free will of there own for them to choose the way in which they will react in the situations in life…

And that was the right thing for God to do as how unpleasant it would be for him to be surrounded by people who didn’t have a mind of their own but unconditionally obeyed their master! They would in fact be Zombies– the living dead!

However, having the freedom of choice has its responsibilities, for we can choose to do the wrong thing. That’s what Lucifer, the once Arc angle, did at the beginning when he decided to take God’s place and rule the Universe himself…(Isaiah 14:12-14)

How very, very sad for when we oppose God, though we are permitted to do our own will, it is always to our disadvantage. I am reminded of Judas who betrayed Jesus. Instead of Judas being rewarded as the other apostles were for being co-workers with Jesus, the Word of God says of Judas ” let his habitation be desolate… and his bishoprick let another take.” (Acts 1:20) Judas is certainly not in heaven today rejoicing with the other disciples and Jesus but locked in the bowels of Hell…

We should always choose to do the right thing when we know how Jesus reacted. For example, although he had many enemies by way of the Pharisees who greatly opposed him from day to day he tried often to make peace with them. But it was they who would not accept him and continued their hostility. Finally Jesus said in desperation:-

“Jerusalem, Jerusalem, thou that killest the prophets, and stonest them which are sent to thee, how often would I have gathered thy children together even as a hen gathereth her chickens under her wings and ye would not! Behold, your house is is left unto you desolate. For I say unto you, Ye shall not see me henceforth till ye shall say Blessed be he that cometh in the name of the Lord.” (Matthew 23:37-38)…. Moreover, the dying words of Jesus at Calvary were: “Father forgive them for they not know what they do.” (Luke 23:34)

However, there are times when we may not know the will of God in a particular situation and therefore cannot choose to do the right thing. But if we genuinely don’t know the right course of action to follow then God undertakes on our behalf. Remember, he knows the entire future of each one of us, and he knows how we will choose later in life. Notice that this is not God over-ruling our choice, but giving us time to come to the right conclusion and choose on that basics….Let me give you an example of what I mean:-

When as a young man serving in the Royal Air Force my dream of becoming a pilot and the several hard years that followed of self tuition, studying from books in my off duty hours to gain the necessary academic qualifications, I failed at the interview by a slender margin to be selected for a pilot’s course. I was absolutely heart broken. I can remember the occasion well: I was on the island of Malta when a serving officer broke the news to me…later during that hot days work while having a cooling shower God spoke to my heart out of the Book of Revelation and said ” I have set before thee an open door …” (Revelation 3:8)

To cut a long story short, my interests changed when I read the book that a Christian friend gave me titled ” Ever increasing faith.” By Evangelist Smith Wigglesworth. While I had often read the stories of the miracles that Jesus did, and fully believed them, I was amazed that healing miracles were happening TODAY as mentioned in the ministry of Smith Wiggleworth.

I said to myself ” I am going to find out if these things are really genuine.” It wasn’t long before I witnessed miracles taking place first hand in a Crusade meeting in the city of Birmingham under the ministry of Rev: Morris Cerullo…. That was it !! I had purchased my discharge from the R.A.F earlier and was free to come into the ministry full time as an Evangelist, which I did.

Over the years I have seen God heal many people through my humble ministry. In fact God healed me of a back condition instantly after I had suffered it for two and a half years…. So I knew then, without a shadow of doubt, that the people who claimed to be divinely healed were telling the truth…

By the grace of God I have spent my life preaching the Gospel and serving the kingdom of God. It has been a great adventure and one in which God has enabled me to gain outstanding achievements. I have never looked back.. If I was given the choice all over again, I would choose to be a full time Evangelist instead of a full time pilot! Yes, God knew that from the beginning and by his grace has brought it to pass in my experience. Thank you Lord….

Beloved, now its your day…You will never regret serving God with the years of your life, however humble or simple the task may be…nor is ever too late to begin…

All the works of God were finished before the foundation of the world and as long ago as the kingdom of Babylon God gave king Nebuchadnezzar a dream the fulfilment of which is transpiring today and has great prophetic significance concerning the Endtimes.

In chapter two of the Book of Daniel is recorded the dream that king Nebuchadnezzar had of a great Image that stands before him. The head of the Image is of fine gold, the chest and arms are of silver, the stomach and thighs of brass, and the legs and feet are of an iron/clay mixture. (Daniel 2:31-33)

Daniel interprets the four parts of the image as representing kingdoms, starting with Babylon the head of gold. (Daniel 2:38-40) These four kingdoms are noted in history as four consecutive World Empires. They are: the kingdom of Babylon, the kingdom of the Medes and Persians, Ancient Greece under Alexander the Great, and the great Roman Empire.

The legs of the Image are of particular interest to us. They represent the world empire of our day: none other than politically the European Union and religiously the One World Church (the coming together of all the denominations -the result of the “Church Unity” move) Seen on the Image as its iron feet and clay toes, materials that do not mix, as pointed out by the record (Daniel 2:42) Betraying disunity in the midst of the EU and the One world church…

It is upon this structure that a stone ” cut out without hands” (not the work of man but that of God) falls and disintegrates the whole Image. (Daniel 2:34-35) The entire kingdoms of this world cease to exist and the kingdom of God is set up on earth: Governed by Jesus and ruled by his co-workers… What a different place this world is destined to be!…Beloved, the kingdom of God is at hand and we are almost there, soon our troubles and trials will cease and we shall live and reign with Jesus…FOR EVER! Hallelujah!

Push out from the comfort zone

Challenges tend to push us from our comfort zone to places that can be uncomfortable. The tendency is to go the path of least…