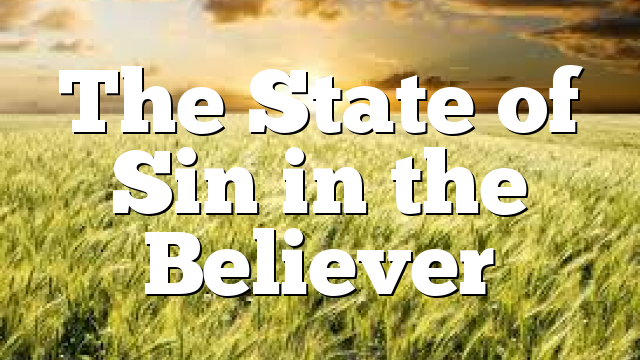 One must not fall into error of thinking that, because Wesley defined a proper
sin as being the wilful one and only in the unbeliever, he had no other concept of
sin. Wesley recognized that there is difficulty in defining sin. He did not maintain
that it is easy to know when sin has been committed. He saw a degree of yielding to
inner sin while one is yet a believer, but the commission of a full-grown, wilful sin
cannot occur while faith and love are in the heart. Wesley did believe it was possible
for a believer to lose his faith and love and again commit this kind of sin, but he
insisted that this sin, which he called the properly defined one, cannot be attributed
to the believer. It is a religious rather than speculative concept and fits the Pauline
and Johannine instructions that Christians do not sin. Wesley wanted to chisel this
definition to a sharp point and concluded that the believer does not willingly sin as
does the unbeliever.
However, Wesley’s definition of wilful sin should not blind one to the fact that
he also had a definition of sin in believers. Many who have read Wesley casually
often conclude that Wesley denied sin in the believer, but this denial results from a careless reading of Wesley. The principle of sin does remain in those that are justifiied.
Its power is broken, but it is not expelled from the heart. Sooner or later it will
manifest itself and the believer will become conscious that his heart is still evil.
However, this evil does not reign and the believer is able to be an overcomer.
A careful reading of Wesley’s sermons “Sin in Believers” and “Repentance of
Believers” ought to dispel any doubt concerning Wesley’s concept of sinfulness in the
believer. He defined this inward sin as follows,
By sin, I here understand inward sin; any sinful temper, passion, or affection;
such as pride, self-will, love of the world, in any kind of degree; such as
lust, anger, peevishness; any disposition contrary to the mind which was in
Christ.23
Wesley did call these remains of sin in the believer by the name of sin. He distinguished
among the guilt, the power, and the being of sin. When one truly believes
the guilt is gone, the power of sin is broken, but the being of sin remains. This “flesh
has no dominion over us ” but it still exists.24
In describing the sin in the believer, Wesley insisted that the believer’s heart
needs to be unveiled. They should “be abased,” “be humbled in the dust,” see themselves
as nothing and vanity while yet they trust their Christ. Believers can be deceived
and imagine they are free from sin while evil is still there. Therefore, they
need to be convinced of pride, self-will, and other sins. Without the clear light of God,
one cannot possibly perceive “a propensity to pride, self-will, anger, revenge, love of
the world, yea, and all evil; a root of bitterness, which if the restraint were taken off
for a moment, would instantly spring up,” and “such a depth of corruption” that
dwell in the heart. The believer can be deceived about it for awhile, but is soon
awakened to his evil.25
William Sangster is wrong when he said Wesley rejected the
idea of unconscious sin. Wesley knew that people have sin in them as believers even
when they do not know it. One of Wesley’s constant emphasis was that one should be
fully awakened to his sinfulness.
In reality the picture Wesley drew of the carnal heart of the believer is not too
different from that drawn by Luther, Calvin, and others in the Reformed tradition.
This may be surprising to those who know that Wesley taught that no believer sins
wilfully and that he can be cleansed from all sinfulness of heart in this life. Wesley
did insist on a real and drastic change when a person is born of God and changes
from the unbeliever to the believer, but the believer still experiences inward sin and
he must fight against it until there comes to him a greater deliverance.
I will close this section by stating that Wesley did teach a deeper and fuller
cleansing for this inward sin, even in this life. He held with the Reformers that this
corruption of nature needs to be fully cleansed before one could enter Heaven. He
also held that the believer who is walking in the light and following God will be so
cleansed at the time of death, or just before, in order to enter Heaven. His teaching
is distinct, however, in that he believed it is possible for a believer by faith to enter
into this cleansing experience earlier in life. He called this work of grace in the heart
entire sanctification and spoke of it as Christian perfection.

6 faith facts about the inauguration

Trump, a Presbyterian, plans to attend a private pre-inaugural prayer service with his family at St. John’s Episcopal Church, located a block from the…