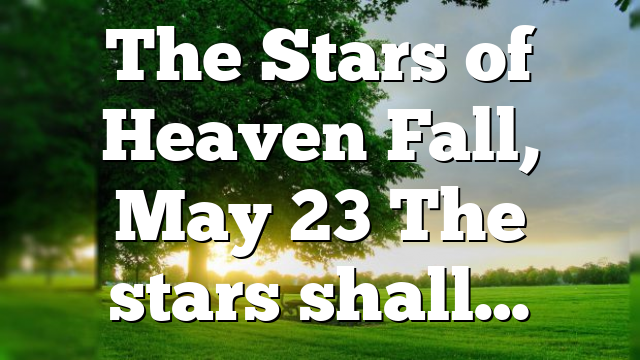 The Stars of Heaven Fall, May 23
The stars shall fall from heaven, and the powers of the heavens shall be shaken. Matthew 24:29. Mar 151.1
In 1833, … the last of the signs appeared which were promised by the Saviour as tokens of His second advent. Said Jesus, “The stars shall fall from heaven.” And John in the Revelation declared, as he beheld in vision the scenes that should herald the day of God, “The stars of heaven fell unto the earth, even as a fig tree casteth her untimely figs, when she is shaken of a mighty wind.” This prophecy received a striking and impressive fulfilment in the great meteoric shower of November 13, 1833. That was the most extensive and wonderful display of falling stars which has ever been recorded; “the whole firmament, over all the United States, being then, for hours, in fiery commotion! No celestial phenomenon has ever occurred in this country, since its first settlement, which was viewed with such intense admiration by one class in the community, or with so much dread and alarm by another.” “Its sublimity and awful beauty still linger in many minds…. Never did rain fall much thicker than the meteors fell toward the earth; east, west, north, and south, it was the same. In a word, the whole heavens seemed in motion…. The display, as described in Professor Silliman’s Journal, was seen all over North America…. From two o’clock until broad daylight, … an incessant play of dazzlingly brilliant luminosities was kept up in the whole heavens.”—R. M. Devens, American Progress; or, The Great Events of the Greatest Century, ch. 28, pars. 1-5…. Mar 151.2
Thus was displayed the last of those signs of His coming, concerning which Jesus bade His disciples, “When ye shall see all these things, know that it is near, even at the doors.” After these signs, John beheld, as the great event next impending, the heavens departing as a scroll, while the earth quaked, mountains and islands removed out of their places, and the wicked in terror sought to flee from the presence of the Son of man. Mar 151.3
But the day and the hour of His coming Christ has not revealed…. The exact time of the second coming of the Son of man is God’s mystery. Mar 151.4

﻿ A cumulative Pentecostal involvement in Donald Trump’s presidency: Prophetic WARNINGS vs Prophetic WORDS By now, most of my readers will have heard that…