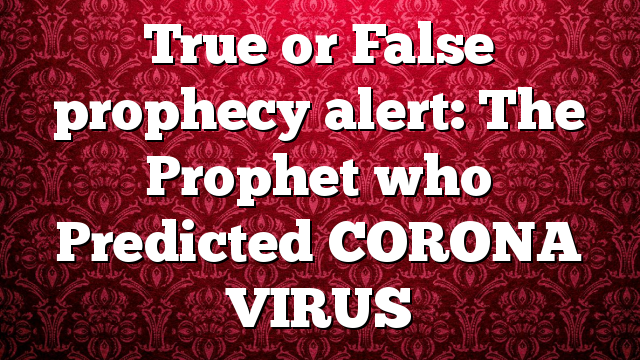 While prophet Makandiwa may have been precise about some some elements of the pestilence, some have been debunked with the latest series of research going on around the virus.

Initially Corona was thought to have originated from the sea creatures after all it broke out in a Wuhan Market ‘wet market’ which specializes in selling sea food and the illegal sales of other wild life.

It is called a wet market because the animals are usually slaughtered at the market shortly before selling to ensure freshness.

However recent research by scientists indicate that the virus originated in bats and was transferred to humans through a yet-unidentified intermediary species.

Another previous study suggested that it went through snakes before being passed on to humans.

In early February, Chinese researchers published that the intermediary species may have been the pangolin though this work has not been reviewed yet.

On March 11 World Health Organisation (WHO) declared the virus a global pandemic and said it was “deeply concerned by the alarming levels of spread and severity” of the outbreak.

According to WHO at least 5,700 people have died from the disease and there have been more than 152,000 confirmed cases worldwide. The numbers keep rising daily.

Was Makandiwa right on the money with his prophecy?