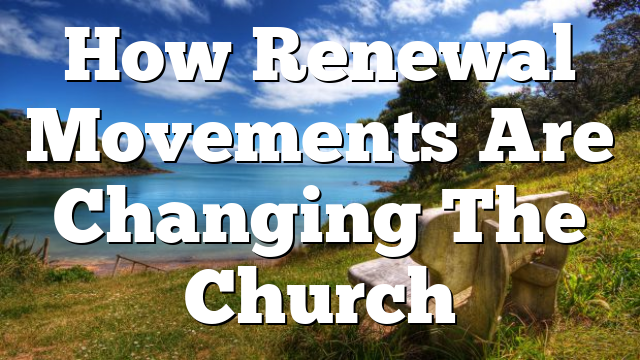 The economist Joseph Schumpeter famously described capitalism as “creative destruc- tion.” Paraphrasing Schumpeter, church renewal might be described as “destructive creation.” For example, the Great Awakening of the mid-eighteenth century yielded impressive numerical growth for some congregations but triggered catastrophic decline for others. The Holiness revival of the mid- and late nineteenth century brought new vitality to the Methodist Church but prompted the founding of a swarm of smaller denominations that saw even revitalized Methodism as moribund. The Pentecostal and Charismatic movements of the twentieth century led to love fests and slug fests. Thus has it ever been.

T us is it still today. As we observe the anguish of most mainline denominations — for example, the United Methodist Church, the American Baptist Churches USA, the Episco- pal Church USA, and my own Presbyterian Church (USA) — roiled by seemingly endless theological controversy, most recently over the question of non-celibate homosexuals’ eligi- bility for the ordained ministry, we should keep in mind that there would be no controversy if the mainline had not ﬁrst been stirred by the neo-evangelical resurgence that began in the 1940s and ’50s, and if it had not then been invigorated by the Charismatic Renewal that began in the 1960s. Where there’s life, there’s strife.

But by the same token, where there’s strife, there’s life — and where there’s life, there’s hope. This is the theme of T omas Oden’s new book, Turning Around the Mainline: How Renewal Movements Are Changing the Church. Oden, an ordained United Methodist minis- ter and an emeritus professor of theology at Drew University, sounds the call to arms on behalf of his cobelligerents in “the renewing and confessing movements within the main- line” (11). As he has already done in After Modernity . . . What? Agenda for T eology (Zonder- van, 1992), Requiem: A Lament in T ree Movements (Abingdon, 1995), and a host of other works, he highlights what he sees as mainline Protestantism’s abject surrender to modernity, linking this to its moral and numerical collapse.

Far from collapsing, Oden says, traditional believers in the mainline denominations have gone from strength to strength. T ough mainline bureaucrats have consistently minimized their numbers and marginalized their leaders, these “confessing Christians” (21, 22, 23, and passim) have settled in for the long haul, ﬁghting for representation in church courts and learning to maneuver in the corridors of ecclesiastical power. At the same time, they have developed an ever-expanding network of renewal-oriented organizations, publications, and conferences. The book devotes considerable attention to bodies like American Baptist Evangelicals, Episcopalians United, Presbyterians for Renewal, and especially Good News, a United Methodist society whose impact has extended far beyond the UMC.

This transdenominational dimension is another focus of Oden’s attention. He notes that in bringing together like-minded believers, “the renewal and confessing movements [have come to] constitute an emerging, potentially cohesive, ecumenical reality” (50). T is is evident in such events as October 2002’s “Confessing the Faith” Conference in Indianapo- lis, in groups like the Association for Church Renewal, and in specialized task forces like the ACR’s Confessing T eologians Commission. The book devotes a great deal of space

(pp. 121-75) to what Oden calls “core teachings of confessing Christians” (121), a useful compilation of renewal organizations’ statements on a wide range of theological topics. T ough this makes for tedious reading, his point is that the forces of renewal are not a kind of clerical counterpart to the political phenomenon of the single-issue voter.

We live in an era of ecclesiastical realignment, a time when long-immobile tectonic plates have suddenly, violently begun to shift. In some denominations — for example, the UMC — the forces of renewal are in the ascendant; in others — for example, the PC(USA) — they have suﬀered signiﬁcant setbacks. Recently local and regional units of the Episcopal Church, the American Baptist Churches, and the United Church of Christ have declared their independence, and more such units from these and other denomina- tions may eventually follow suit. What will be the ﬁnal outcome of this process? No one can say. Whatever lies ahead, though, Tom Oden’s book will help “confessing Christians” make the most of the “destructive creation” their Spirit-empowered activities have already set in motion.

Love and Loving Is A Gift