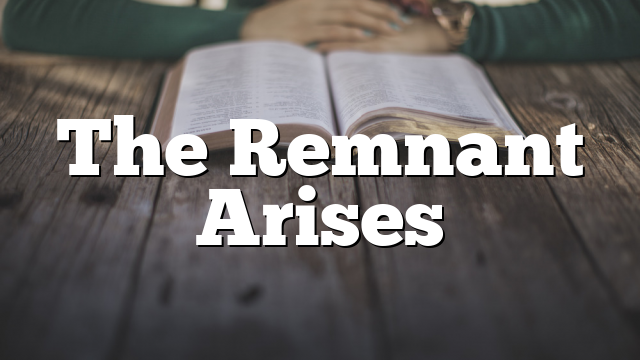 TIRED OF THE NORM AND HYPE, THE REMNANT ARISES

[Many of the Caleb generation who caught the vision 45-50 years ago have remained strong and bided their time awaiting a time such as this and will now be powerfully used to mentor rising younger generations of sold-out brethren and together take the land for this unified remnant.

The Word remnant would seem to imply small, but the Lord has been showing me that it is indeed vast and growing as the generations awakened and the embers are stirred to flame. This is beginning to happen concurrent with the great falling away that has been in progress, and the light will push back the darkness.

Sister Brandy Maricelli has really caught the vision and beautifully expresses it. Please prayerfully read what she wrote and ask the Lord if you are a part of this sold-out remnant of believers that make up His Bride. If you are not there yet, ask Him to instill the vision and the hunger in your heart. More than likely, if you are living for Him and His way, you already are, and just hadn’t seen it expressed as Brandy does so well. – Ray E Horton].

There’s a company of people that are tired of the norm, hungry for more of God and ready to move into an authentic relationship with Him. They are tired of the hype, the programs, the pretending, the masks. They want Truth, a real family atmosphere and a place where they can grow in the Lord.

They are ready to go through the fiery process with the Lord to be pruned for His Glory. They want to discuss the deeper things of God, not go over again and again the principles of salvation. They want to be a mature believer, a vessel of Honor fit for the Master’s good use. They are fully frustrated with status quo Christianity and desire a real experience with Jesus. They want to sit with other hungry saints and share what the Lord is doing in their life and what He is saying to them. They want Jesus to sit on His throne, and be King, and not man.

They are ready to discard the residues of religiosity and embrace the narrow road, the only Way, Jesus. They are over the patterns and principles they have always known and been taught but are not founded in the Word of God. They are being awakened to the need to return to the Word and embrace the true gospel.

They are no longer blinded to the ritualistic falsities but hunger for the One True God. They are no longer satisfied with compromise, although many around them seem to be. They are different, awakened and willing to break out of the mold to fully embrace the Cross of Christ. There’s a realization coming alive in their soul, that there is more, that things need to change, and they are willing to break free and become that change.

They are daring, bold, brave and hungry. They are ready to take the risk, to be persecuted and even hated by the ones that settle for less. They are marked. And they know it. They know they are ruined forever, because Jesus has shined the light of revelation in their soul, is leading them out, leading them to Him. They feel like a rebel at times, but know it’s not against God, but against the entrapment that portrays itself as God.

Growth, freedom and change is their inheritance as they courageously step out, into the fullness of God’s abundant life

They are no longer bound by lying spirits, but are holding the keys to freedom and ready to walk into the wide-open space God has given them authority to walk in. They feel the sun on their face, feel the breeze all around, and can now see the green expanse ahead. Growth, freedom and change is their inheritance as they courageously step out, into the fullness of God’s abundant life. There’s more, and their spirit is drawn to Him. It’s stronger than the desire of past comforts.

This is what they were created for, and their purpose is in Christ. They are willing to embrace their cross for Him. They are the remnant. They are the ones that will find Him. There’s no turning back now…they are forever captivated by Him. They are not returning to the mountain of compromise, enslaved to a factory of manufactured figurines that have no power.

They see Jesus, and his smile holds more power than all of those religious relics. They will become united with Christ and display His glory, there is no stopping this company of sold-out ones. They no longer entertain thoughts of pleasing man or returning to their golden ideas. They are lost in the gaze of the One True King, and are marching forward, away from all they knew, but toward the One that has always known them. They are the Bride. They are undone in His Love. They are free.

FacebookTwitterSubscribe
Subscribe to receive all news to your email or phone: [wysija_form id="1"]
ariseschurchremnantthetheology

This Announcement is exciting news of available scholarship opportunities beginning this summer. Further, we are delighted to announce the availability of Full Scholarships beginning…