The END is NEAR: Turkey shot down Russian warplane on Syria border (12 min ago) 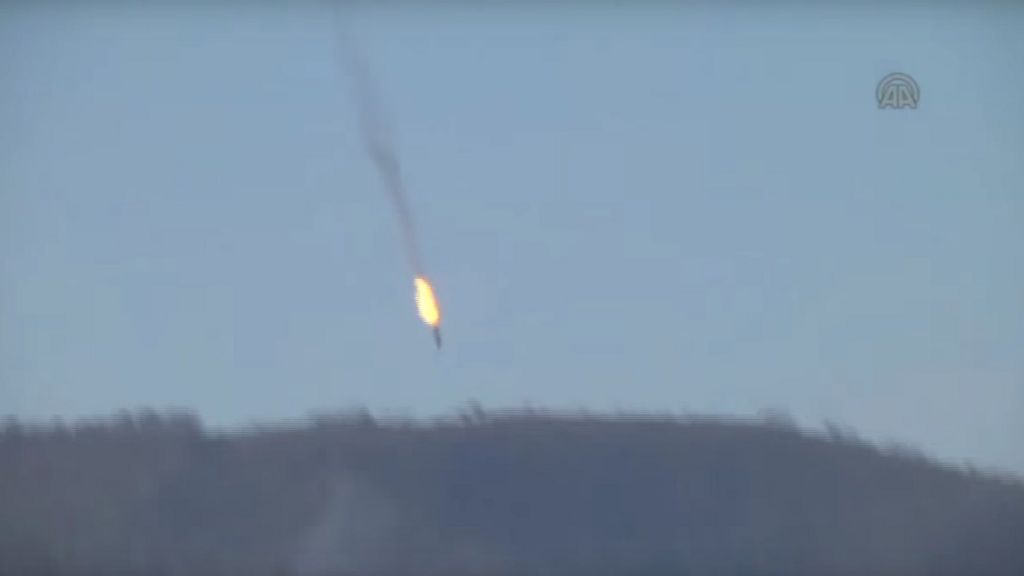 John Kissinger [11/24/2015 7:37 AM]
Turkish F-16 shoots down Russian fighter jet Su-24. A U.S. official confirmed to Fox News that the Russian Sukhoi-24 was downed by an air-to-air missile north of the Syrian port city of Latakia. The official added that the Russian jet was warned three times to depart Turkish airspace. The official told Fox News that the Su-24’s two pilots parachuted safely and were last seen attempting to evade capture. Two Russian helicopters were airborne to attempt a rescue mission. Another source says one of the pilots is dead http://www.foxnews.com/world/2015/11/24/turkish-f-16-shoots-down-russian-fighter-jet-near-syria-border/?intcmp=hpbt1

John Kissinger [11/24/2015 7:53 AM]
There are unconfirmed reports that both pilots were killed after parachuting from the Russian jet http://www.theguardian.com/world/live/2015/nov/24/russian-jet-downed-by-turkish-planes-near-syrian-border-live-updates | One pilot reportedly dead, another captured http://www.telegraph.co.uk/news/worldnews/middleeast/syria/12013212/Turkey-shoots-down-Russian-military-plane-on-Syria-border-live.html

John Kissinger [11/24/2015 8:44 AM]
This specific war is much more than that however. It refers to Gog & Magog and the Ez. 38 prophecy http://www.pentecostaltheology.com/the-ezekiel-38-war-on-israel-in-light-of-russia-and-syria/

John Kissinger [11/24/2015 12:13 PM]
EU / NATO just called emergency meeting(s) for this Sunday PM. Pls have your churches pray in the morning service if you can. A NATO air-to-air strike on a Russian bomber bids nothing good for the future http://neurope.eu/wires/the-latest-nato-to-hold-urgent-meeting-after-turkey-shoots-down-russian-aircraft/

John Kissinger [11/24/2015 5:16 PM]
so Henry Volk can translate here but it aint too good https://www.youtube.com/watch?v=KGlJFoIBKQw&feature=youtu.be

John Kissinger [11/24/2015 8:03 PM]
just published an article inspired by William DeArteaga before all this happened http://cupandcross.com/empire-state-church/

John Kissinger [11/25/2015 11:15 AM]
got to say it again http://cupandcross.com/henry-kissinger-and-russias-prophetic-destiny-in-syria/

Pastor Shane Brown gives a Bible-based teaching about the next event on God’s end-time table – the rapture of the church. http://www.prayerfaithministry.com