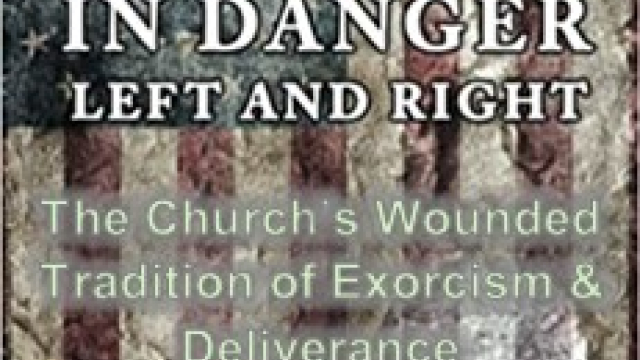 This guest article is a chapter adapted from America in Danger, Left and Right: Biblical Analysis, Actions and Intercessions for the Current Crisis (2022), by William De Arteaga. To introduce his book and this chapter, William De Arteaga writes: America in Danger, Left and Right: Biblical Analysis, Actions and Intercessions for the Current Crisis, gives the historical background to our woeful spiritual and political situation. Part One studies the decades-long takeover of the American educational institutions by political radicals who have contempt for the American traditions of free speech and a democratic, free-market society. The Left Radicals are deeply influenced (demonized) by Marxists ideas, such as its profound hatred for the bourgeois. This has caused both economic destruction and mass murder. A large intercessory prayer campaign coupled with and understanding, and practice of deliverance ministry is needed to reverse the awful state of the universities. Unfortunately, deliverance ministry and exorcism are little understood by many elements of the Church. The chapter featured by PneumaReview.com covers this issue. The second part of the book examines the spiritual damage done to America by the drift in the Republican Party as many of its leaders embraced the demonized writings of Ayn Rand (Atlas Shrugged, etc.). This has led the Republican Party to forsake the needs of the poor and become subject to the judgement of God (Isaiah 1-29). Further, I believe President Trump has caused additional, serious damage to the soul of the nation by his immoral behaviors, behaviors often excused by Evangelicals, as in his continuous reviling of his opponents (1 Cor 6:9-10).

Chapter 11: The Church’s wounded tradition of exorcism and deliverance

Doing deliverance as in the Bible After my entry into the Charismatic Renewal, I developed an interest in the ministry of exorcism. I set a goal to write a book on the different approaches to exorcism and deliverance: Catholic, Pentecostal/charismatic, and Protestant. I did much reading and cassette listening in this area and performed several exorcisms as a lay charismatic. This was the Lord’s way of showing me the literature I was reading was accurate. By divine inspiration (and protection) I put aside that project. I believed I needed more time and spiritual maturity. I was right. But the knowledge I gained helped me on more than one occasion as a pastor, and when ministering at the public prayer station our church had pioneered. We took the prayer station to “little Five Points” in Atlanta, a neighborhood populated by ex-hippies and New Age folk. About the third or fourth Saturday at the Little Five Points, Carolyn, my wife, and I were standing by our prayer station sign, and two other prayer intercessors were a few yards away on folding chairs we had brought. We left a nearby park bench to the locals. A tall, African American passed by, and I gave my usual invitation for prayer, “Do you need prayer for anything today?” [1] He stopped and considered for a second, and then stepped up to the prayer station. “Yes, I have a neighbor who is addicted to drugs, and it is ruining his life.” Carolyn and I prayed for his neighbor in proxy, by laying hands on Tom (that was not his name). I rebuked the spirit of addiction and asked the Lord to totally set him free. The supplicant was happy with the way we prayed and went off thanking us. I resumed my invitations to other passersby.

Ten minutes later he returned and confessed that he also had a serious drug problem. That is not an uncommon pattern at the prayer station, as many persons are reluctant to share their most pressing or embarrassing need to total strangers. But our prayers had convinced him that we could be trusted. He shared his tragic story. He was an engineer and well on his way to the American Dream. But he became addicted to cocaine, and lost his job and family, and now was on the edge of skid row. He had been a church-going man, but after his wife left him, he stopped attending.

We invited him to sit at the nearby bench and asked if he would let us pray for him by casting out the demons of addiction and anything else in him. He agreed. I motioned the other team members to join us. Carolyn and another team member began praying in tongues. After a few moments, I began, “In Jesus’ name I come against any and all evil spirits inhabiting and harassing Tom! I come against the spirit of addiction and I command you OUT!” Tom shook as if he was struck by some invisible object. Carolyn immediately added, “Spirit of despair.” She was functioning with the gift of discernment of spirits (1 Corinthians 12:10) and I commanded, “In Jesus name, spirit of despair, come out!” Again, Tom shook. Carolyn injected, “Spirit of suicide.” I continued, “Spirit of suicide, leave NOW!” Again, Tom quaked. “Anymore?” I asked Carolyn. She prayed in tongues for a few seconds, “Spirit of rejection, from childhood.” I continued, “Foul spirit of rejection, leave now in Jesus’ name!” Tom shook yet again. “More?” I asked. Carolyn answered, “I don’t see anything else.” I stepped up to Tom and laid my hand on his head. “In Jesus’ name, I ask the Holy Spirit to flow into you, and fill every empty space that the demons occupied. I command your neurological system, especially the brain, to be cleansed of all addiction to cocaine or any other drug.” As I was praying this, I could feel the energies of God flowing into Tom. His face came alive with surprise and joy. A few moments later he got up, declaring, “I feel like a new man. I am completely … free.” We prayed for him a little longer, asking the Lord to restore his career and family. I counseled him that he must go back to church to get Christian fellowship and continued support to rebuff any demonic re-infestation. Tom agreed and walked away thanking us and praising the Lord. I never heard from Tom again, so I can’t affirm that his deliverance stuck, or if he allowed the spirits to come back in and finish the ruination of his life (Matt 12:43-45). But I can affirm that he was delivered that day. Tom was not a student radical, and assuredly it will be more difficult to get a radical to accept deliverance, but with the Lord’s help and intercessory support of local churches such ministry is doable. Certainly, those ministering in the universities and especially among the street radicals should not be afraid or shy to minister exorcism/deliverance. Tom’s deliverance occurred back in 1987. Since then. I have had a half dozen others, but always in the setting of a church, and most after I was ordained as an Anglican priest.[2] Several years ago, I was ready to do the first draft of this chapter, I thought I would state that such public exorcisms are imprudent, and the successful case of Tom’s exorcism was due to God’s grace overcoming my youthful indiscretion. Rather, deliverance/exorcisms should be done with preparation and care, and at least in privacy and possibly with medical screening beforehand, etc. In effect, a prayer station deliverance should not be done. But I received a check in my spirit about taking this approach. I was reminded by the Holy Spirit of the exorcisms in the Gospels. In the New Testament exorcisms were done by Jesus, his Apostles and disciples in public. Exorcisms occurred as immediate, unplanned confrontations when the demonic showed up. In fact, in the first ministry campaign Jesus’ disciples reported back with great joy that they had healed the sick and cast out demons (Luke 10:17). There was no hint there of special preparations, ministry ordinations, or of privacy concerns which have become a modern fetish. Rather, exorcism was an integral part of the healing ministry. In the Gospels, when a person is sick from a disease, hands are laid on for the disease to be healed (in the command mode), but when the sickness or disorder is due to a demon, the demon is cast out, also in command mode. It is all a seamless ministry of restoring wellness.

As you go, preach this message: `The kingdom of heaven is near.’ Heal the sick, raise the dead, cleanse those who have leprosy, drive out demons. Freely you have received, freely give (Matt 10:6-8).